Microsoft is rebooting its Redmond campus, here's a progress report - OnMSFT.com Skip to content
We're hedging our bets! You can now follow OnMSFT.com on Mastadon or Tumblr! 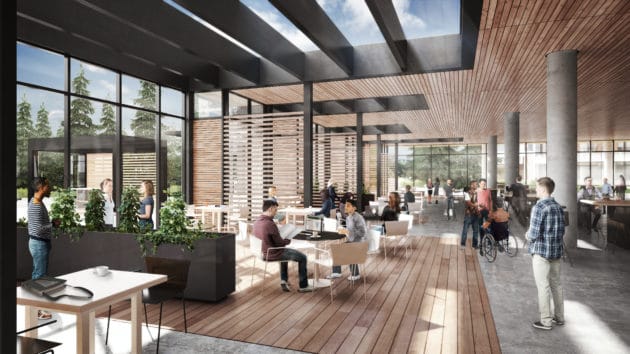 Over the last five years, Microsoft has overhauled its management hierarchy and processes, streamlined its engineering development, trimmed its product lines and engaged in more cross-platform synergies than it had in much of its business history. Now, the company is looking to codify its refined image with a makeover to its headquarters.

Two years ago, we learned that Microsoft was planning a massive rearchticture of its Redmond campus that will center around expediting access to its various buildings by creating a more centralized design. The specifics of Microsoft's plan revolve around redeveloping a 72-acre portion of the Redmond campus that will reposition buildings in closer clusters at one of the campus rather than the scattered shot design of today.

GeekWire got an exclusive look at the before and the vision the company has for the campus, afterward, and it's clear the multi-billion dollar project is an investment in Microsoft's employee future.

Parts of the campus redesign include the demolition of 1980's era buildings and erecting more modern locations, presumably equipped with the latest and greatest tech from the company and its partners; as well as incorporating more trendy business environments such as open office spaces, better conference rooms, and recreational areas.

While Microsoft is in the relatively early stages of the project, some employees can expect to be in their new offices as soon as 2022 and 2023, which would coincide with the city's expansion of its light rail that travels from downtown Seattle through Redmond.

Interestingly enough, Microsoft allowed the four contract companies assigned to the project to offer their own flare to the portions they are in charge of, which means the new buildings will differ in many ways that include style, design, and probably amenities.

While Microsoft dictates much of what goes into each building including the materials used, the company employed LMN, NBBJ, WRNS Studio, and ZGF Architects to help design along Skanska, Balfour Beatty, GLY and Sellen as contractors to help take part in the project. In the end, GeekWire reports that this is an 80/20 relationship as far as how much creative design the contractors and designers are able to dictate the final outcome of the new building designs, with Microsoft being the majority decision holder.

The redevelopment of @microsoft's Redmond campus is a massive upgrade — the real estate equivalent of going from PCs and CD-ROMs to AI and quantum computing. GeekWire's @natjlevy got an exclusive inside look at the latest plans. https://t.co/k72EzhZRAA pic.twitter.com/xdUyh9czmJ

Similar to Apple, Microsoft would also like to open portions of its campus to the public and plans to offer access for hosting of public events, sports, shopping, and dining. Microsoft definitely seems to be investing in its employees' well being, but its new project can also be seen as an investment in the company's recruitment future as it now competes with Amazon and Facebook in its own backyard. Out in the Silicon Valley, Microsoft is also planning a few redesign tweaks to that location as it brushes up its physical resume.

As more engineers, salespeople, marketing agencies, graphic artists, software designers and the like get accompanied to open offices, bike trails, sleeping pods, and game rooms, Microsoft is making sure its campus is just as appealing as its competition and not a museum to Gates, Allen, and Ballmer.