Last year, research firm Futuresource Consulting revealed that Chromebooks were slowly taking over the education market in the US, casting doubt over Microsoft’s ability to compete with its own Windows 10 and Office 365 for Education offerings. Indeed, the report revealed that Chromebooks accounted for 51% of devices shipped to US classrooms in the first quarter of 2016, with Google claiming that more than 60 million students and teachers were using Google Education accounts.

It seems that Microsoft is now taking this threat very seriously, as the company just made two important announcements today: the first one is Intune for Education, a new cloud-based application that will help school to easily set up and manage classroom devices.

This new offering will make it easy to deploy education apps from the Windows Store for Business, and it will also be completely integrated with Microsoft education software and services. “Intune for Education will be available in preview in the coming weeks and broadly available this spring for $30 per device, and via volume licensing,” explained Microsoft Corporate Vice President, Windows and Devices Group  Yusuf Mehdi . 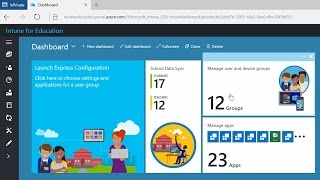 To better compete with Chromebooks, Microsoft has also partnered Acer, HP, Lenovo and JP.IK to develop a new portfolio of affordable Windows 10 PCs, with some models featuring Windows Ink and touch support. “Now Windows 10 devices offer the power, performance and security schools need at the same price as Chromebooks, with none of the compromises,” explained Medhi.

These new Windows 10 PCs will start at $189 and here are a couple of them below:

The Acer Travelmate Spin B118.

Lastly, Microsoft also announced a new update for Minecraft: Education Edition, which will gain an updated user interface and more. Nearly a year after its launch, the educational software has already been used by more than 75,000 students and educators from more than 100 countries, Medhi explained. “We have much more underway for students and educators and we look forward to sharing more details in the coming months,” he added.