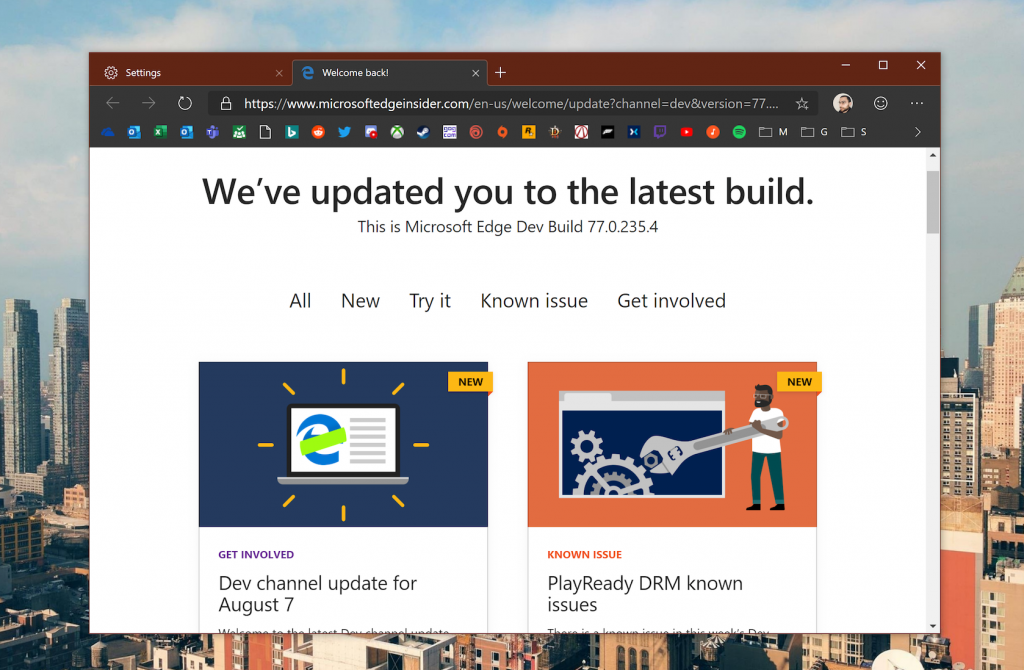 Microsoft has just announced the release of the latest update for the Edge Insider Dev channel. Coming in at build 81.0.381.0, this release marks the first of the new year and the first from version 81.

There are not many new features in this build of the browser, but there are some added abilities like a new option to paste multiple items into a Collection at the same time. Microsoft has also worked to turn favorites sync back on for most Canary and Dev users.

We'll be starting first with what's new: Microsoft has added an ability where Edge can suggest URLs for a user to visit that are similar to previously typed URLs that had resulted in failed navigation. There's also a new keyboard shortcut for starting Read Aloud with CTRL+Shift,+U. Other new features are below, not including the new feature for Collections which we've already mentioned:

There are some known issues in this release. First off, Microsoft wants you to know that some users might still see that Edge windows are all black. You can resolve this by opening the Browser Task Manager with Shift+Esc and killing the GPU process. Other issues include not seeing Collections enabled by default, and users with multiple audio outputs not getting any sound from the browser.

Next, there are some reliability fixes. These range from fixing a crash when syncing favorites, Collections, and Edge Mobile. There are also some other fixes for Amazon Music failing to play, as well as crashes during shutdown. The full list and a look at changed favorites are here, but you can see a small selection below:

In addition to all the above, Microsoft has proposed a security baseline configuration for when organizations install the stable version of Edge. You can read more about that here. The company also wants feedback about the Reading list, and how you'd like it to evolve, and more information is available here.