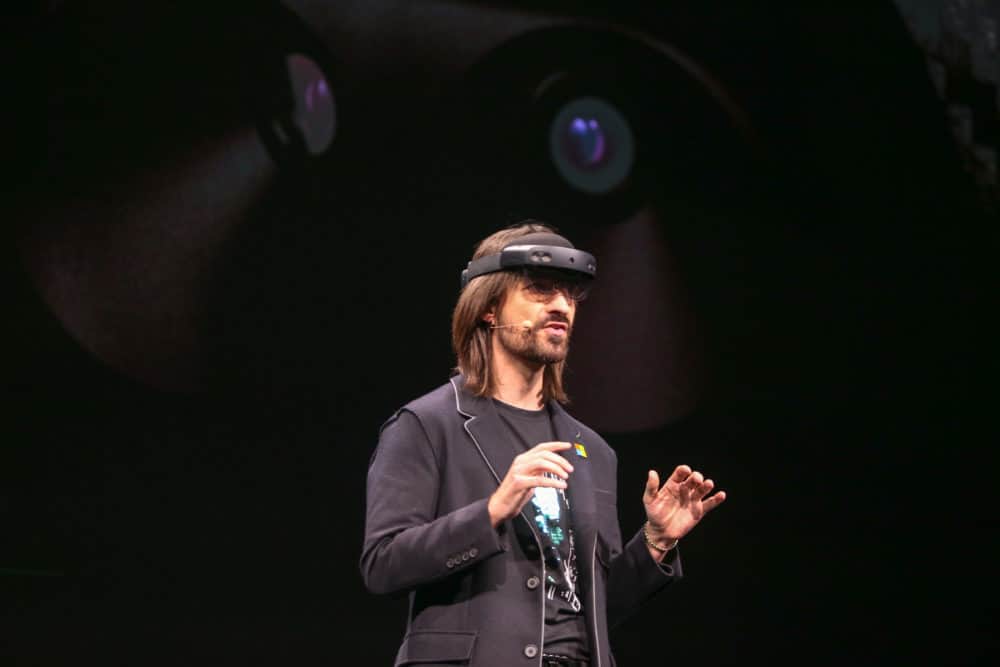 Microsoft unveiled its HoloLens 2 headset at MWC yesterday, and this second generation device is still targeting the enterprise world. At $3,500, HoloLens 2 is also slightly more expensive than the $3,000 HoloLens developer edition, and Microsoft actually won’t be selling a HoloLens 2 developer kit this time around.

Microsoft Technical Fellow Alex Kipman made it clear on stage yesterday that HoloLens 2 has been designed for the ground up for workers. Microsoft has created a range of Dynamics 365 mixed reality apps for HoloLens 2, including a new Dynamics 365 Guides app providing an immersive learning experience to workers.

For the first time ever, Microsoft will also allow companies to customize HoloLens 2 headsets. The Trimble XR10 will pioneer the new HoloLens Customization Program with a hard hat device for workers operating in safety-controlled environments. For other firstline workers, Microsoft has made HoloLens 2 more comfortable to wear by using light carbon-fiber material and adjusting the device’s center of gravity. HoloLens 2 also supports Windows Hello iris recognition, which will make the headset easy to share in an enterprise environment.

In addition to the new flip-up visor, HoloLens 2 also leverages hand and eye tracking technology to deliver some groundbreaking improvements. Indeed, HoloLens 2 users will no longer need to learn complex gestures to interact with holograms, they’ll be able to directly manipulate them with their hands, as if they were real objects. By making the mixed reality headset more intuitive to use, Microsoft will make it much easier to adopt in the enterprise world.

Another surprising thing we learned yesterday is that Microsoft is intending to build an open HoloLens 2 ecosystem. The Microsoft Store and universal Windows apps are still core to the experience, but Microsoft announced yesterday that it will welcome third-party stores and any developers willing to build apps for HoloLens 2. The Redmond giant has already partnered with Mozilla which will bring its Firefox browser to the HoloLens 2. Moreover, the company also brought Tim Sweeney, founder of Epic Games and long-time critic of Microsoft’s Windows Store on stage to announce that Unreal Engine 4 support is coming to HoloLens.

“HoloLens 2 is an incredibly versatile edge device — it will work offline, and it can connect to any cloud,” Kipman said. “But it was designed with Azure in mind. When it connects to Azure, it becomes a shared experience that anyone can access from any device or any platform. When they work together, that’s when the magic happens.”

All these new features and announcements make the basis for a great consumer product, though the company made it clear that its HoloLens headset is still not ready for mass market adoption. Speaking with The Verge, Kipman said that there’s still a lot of room for improvements on the hardware front.

The first gen HoloLens had no real competition when it started shipping in 2016, and the same will likely be true for HoloLens 2. Even though HoloLens 2 is only targeting enterprise users, Microsoft is an obvious market leader in what could be a very profitable market. Thanks to its work on Kinect and software expertise, the Redmond giant is one of the very few companies that can contribute to the emergence of a new era of computing. Microsoft is off to a great with HoloLens, but it will also need to solid ecosystem of third-party apps making it a useful device for consumers.