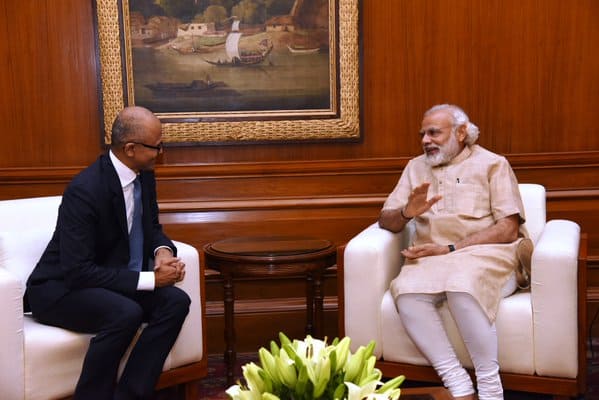 Microsoft CEO Satya Nadella has taken to India yet again for a list of meetings and discussions pertaining to the IT advances for the country. The Indian Chief Executive visited his home country for plenty of reasons, most of them to bolster and enhance the advancement of technology. During the ‘Tech for Good, Ideas for India’ event in New Delhi, Nadella expressed his passion for computer science and poetry.

“Thousands of desires, each worth dying for. Many of them I have realized, yet I yearn for more.”

The touching quote was applauded, to which Nadella explained that the more he learns in technology, the more he wants to pursue it. The CEO of Microsoft is constantly pushing for more advancement, particularly in terms of developing the mixed reality that will combine real life with virtual enhancements. The result of his passion drives him, and his goal in India is to support the government initiatives such as Digital India and Startup India.

While he was visiting, he also came across a few young app developers that shared their ideas with him. “I met a 17-year-old developer who has taken the publicly available NASA data and has created an app that uses this data to monitor growth of algae in Bay of Bengal. This app can be monitored to track changes in global temperature. Then there is game by an 8-year-old who wants the society to balance the development and ecology. This game encourages players to use green technologies,” said Nadella told India Today.

Not only did he make public appearances and speeches, but he also held meetings with various executives and ministers. Nadella discussed enhancing cooperation between Microsoft and Digital India with Minister ofCommunications and IT, Ravi Shankar Prasad. Likewise, Prime Minister Narendra Modi tweeted after Satya’s visit with him earlier today, suggesting that they discussed issues with the IT sectors in India.  Beyond that, it’s still in the dark what exactly called the meeting into play.

It’s a common fact that Satya Nadella is good at boosting morale with his impressive speeches and passionate curiosity. This was his third visit back to India since he took over Microsoft in February 2014, and with more involvement in the development of the country’s technical goals, we’re likely to see more.