“In Spring 2021, we will take the next step in our journey to reach more players around the world by making cloud gaming as part of Xbox Game Pass Ultimate available on Windows PCs through the Xbox app and browser, and iOS devices through mobile web browser,” said Jerret West, CVP, Microsoft Gaming. “By adding over a billion devices as a path to playing in the Xbox ecosystem, we envision a seamless experience for all types of players; whether it’s playing Minecraft Dungeons with your Xbox friends using touch controls on an iPhone, or jumping into a Destiny 2: Beyond Light strike on a Surface Pro when you have a break between meetings.

While the company still isn’t detailing the amount of subscribers to the Xbox Game Pass Ultimate tier that includes Xbox Game Pass for PC, Xbox Live Gold, and Xbox Cloud Gaming, there is some interesting new data about the service today. According to West, Xbox Game Pass monthly engagement “more than doubled” in November compared to 2019, and the boost is likely a result of the launch of the Xbox Series X and S Consoles on November 10. 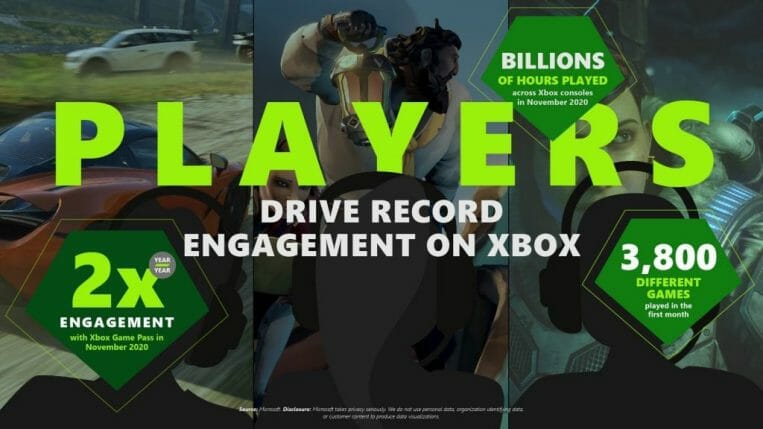 As Jerret West said today, the Xbox ecosystem will be available on over 1 billion new devices once Xbox Cloud Gaming launches on PCs and iOS next year. Xbox head Phil Spencer also recently said that he wants to bring Xbox Cloud Gaming to Smart TVs, and Microsoft could even release its own Xbox streaming sticks if that can help to bring the Xbox ecosystem to more screens.

If the Redmond giant is done talking about console sales, the company has an aggressive strategy to reach as many gamers as possible on the devices they already own. It’s still early days for cloud gaming services, though the competition from Sony’s PlayStation Now, Google Stadia, and Amazon’s new Luna service should not be underestimated.