It’s been three weeks since Xbox head Phil Spencer shared more details about the next-gen Xbox Series X, but today the company finally dumped a lot more information about the new console in a long Xbox Wire post. Just like it did with the Xbox One X three years ago, the software giant also gave our colleagues at Digital Foundry an exclusive first look at the new Xbox Series X, which is confirmed to be the most powerful gaming console ever produced.

Microsoft previously confirmed that Xbox Series X will deliver 12 teraflops of computing power (that’s twice the power of the Xbox One X), but we now have all the details about the console’s CPU, GPU, memory, and storage: 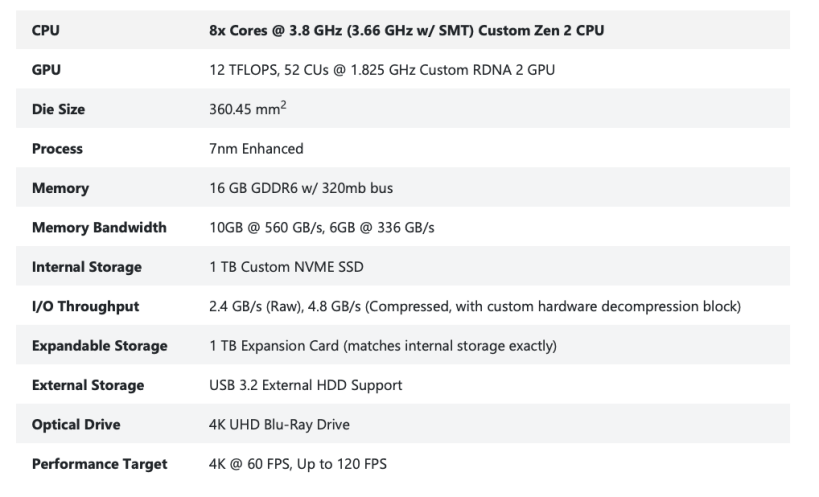 Digital Foundry shared some images of the Xbox Series X next to the Xbox One X, and it’s quite amazing to see that it’s just as large as the Xbox One X, if you put it horizontally. The console is definitely not as big as we expected, and Microsoft previously confirmed that consumers will be able to lay it down horizontally or vertically. As for the dimensions, you’re looking at a 151mm x 151mm x 301mm box. 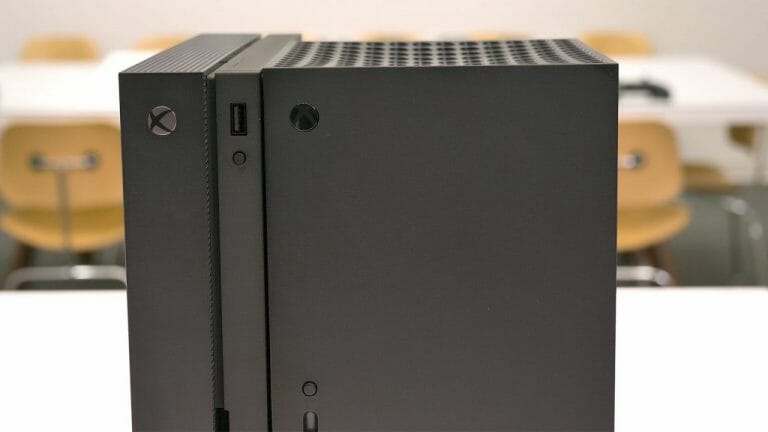 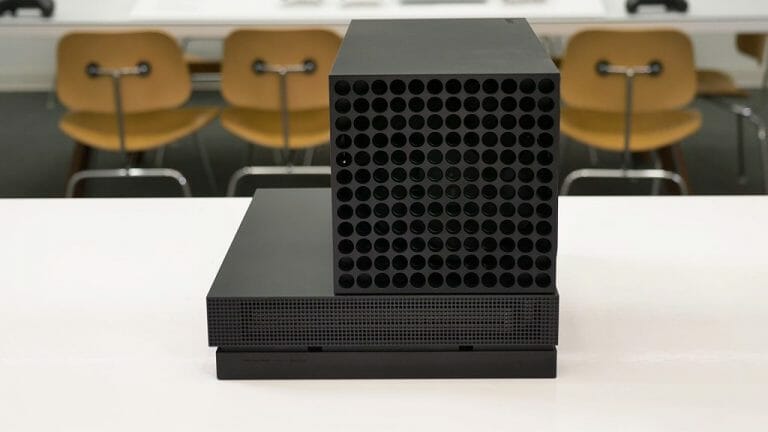 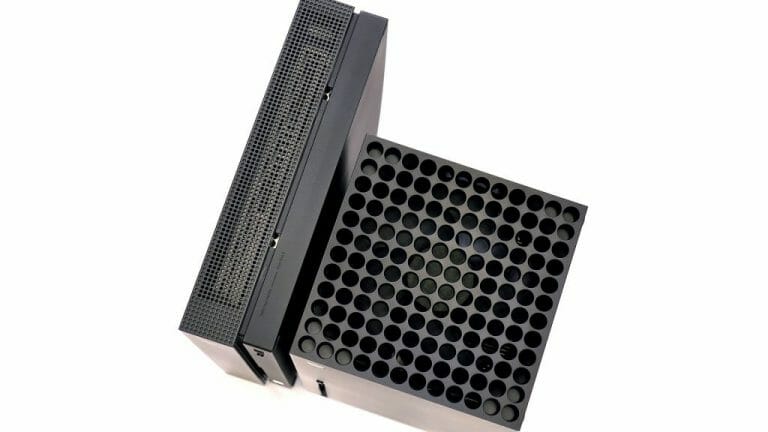 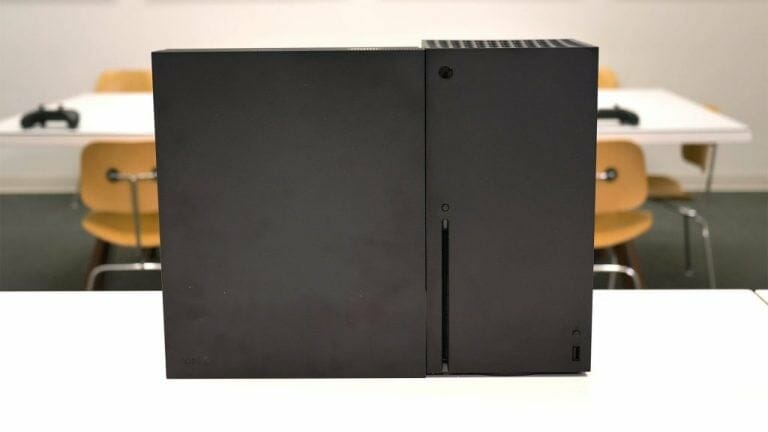 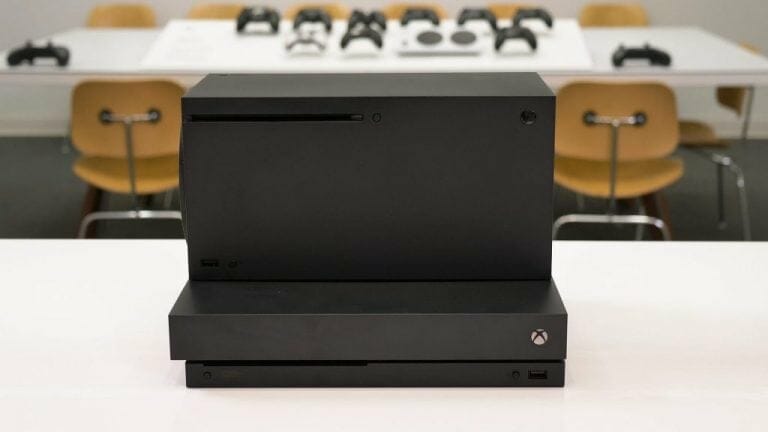 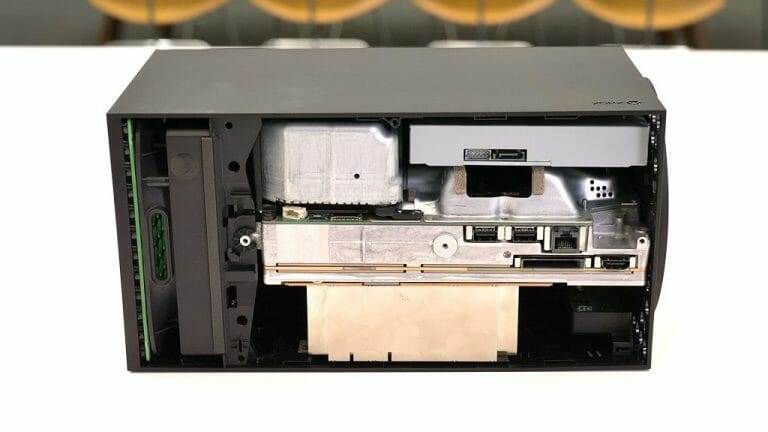 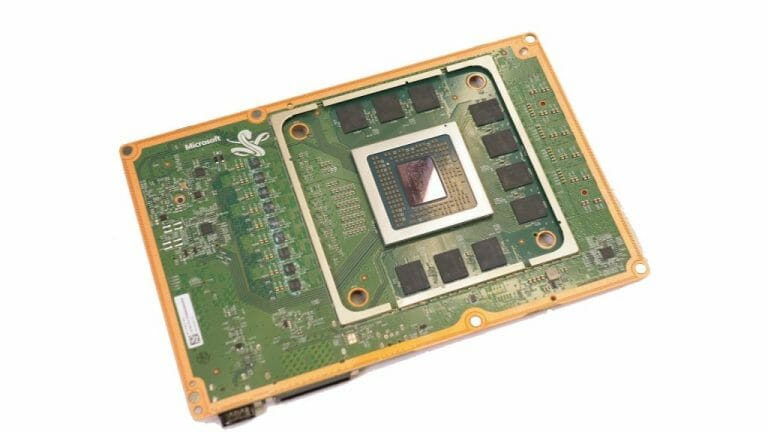 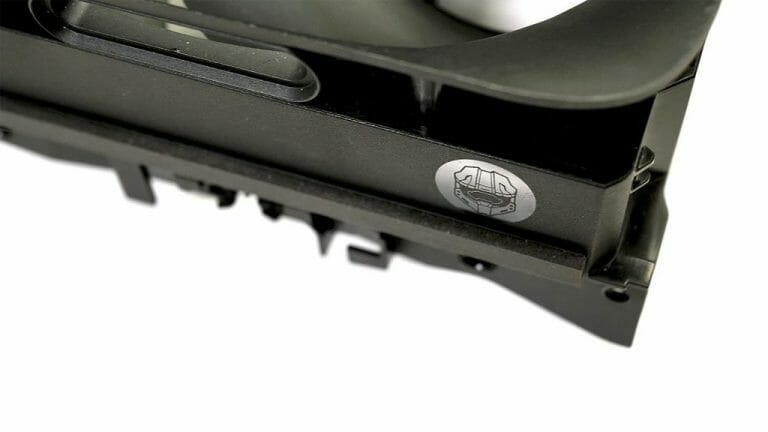 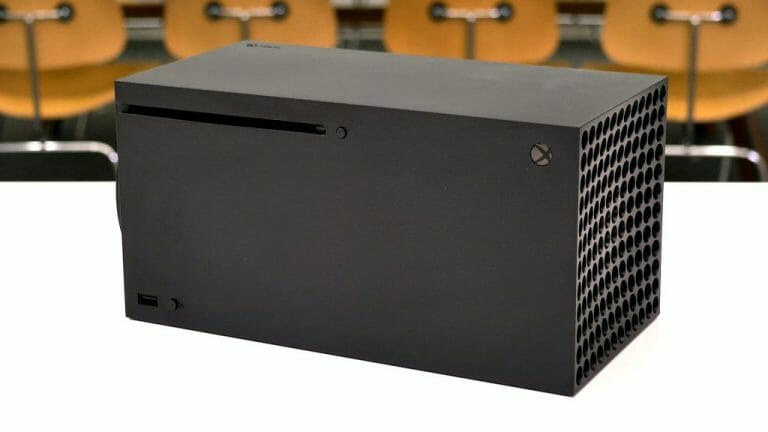 If 12 teraflops of computing power sound pretty abstract on paper, what should make a big difference on Xbox Series X is hardware-accelerated DirectX Raytracing, which will improve how light and sound are rendered in games. You can see how ray tracing will look in Minecraft, a game that has kept its trademark highly-pixelated textures over the years. “Shadows cast from objects soften or harden depending on how far away from the object you are, while lava gives off a warm orange glow that dissipates over distance and reflects off of minecart rails. Even the moon casts its own rays, streaming down through cracks in the walls and reflecting off particles in the air. The Raytraced visuals fundamentally change the way Minecraft feels, drawing the player in and immersing them in a much more realistic world,” Microsoft explained. 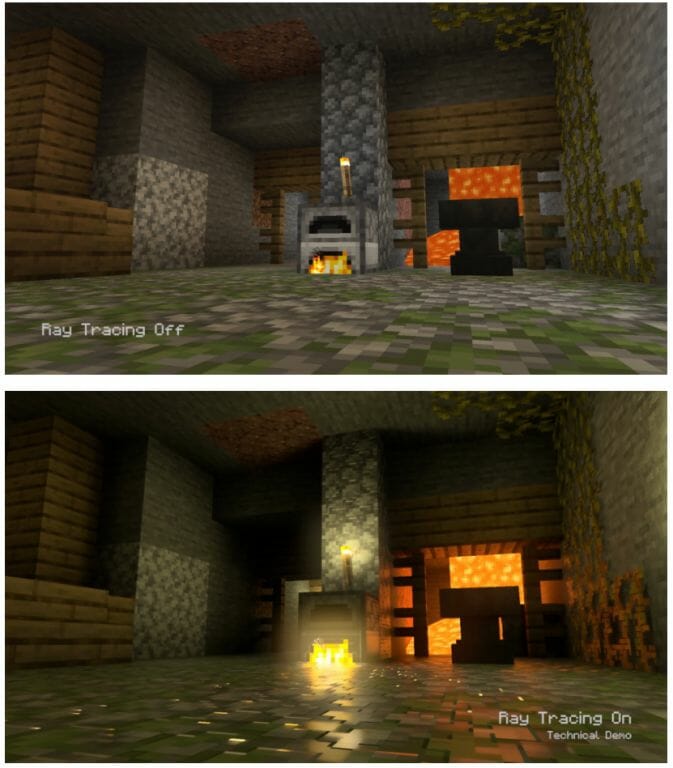 Microsoft also published a GIF with two images comparing Gears 5 running on Xbox One X and Xbox Series X. Microsoft is working on a Series X upgrade for the first-party game that will make it look even better than the PC version with Ultra settings. According to Microsoft, you can expect “higher resolution textures and higher resolution volumetric fog, as well as a 50% higher particle count than the PC Ultra Specs allowed.” According to Digital Foundry, Microsoft showed them benchmark results from this port showing “very similar performance to an RTX 2080.”

Please note that there could be a labelling issue on the GIF below, as the picture labelled “Xbox One X” looks significantly more detailed than the one labelled “Xbox Series X.” It’s possible than Microsoft mixed up the two.

With Xbox Series X, Microsoft wants to deliver a console that brings significant graphical improvements, but the biggest change should be about how games will feel. Thanks to these powerful specs, all games should be able to run at 4K 60 FPS, but the console will also support up to 4K 120 FPS gameplay, as well as 8K 60FPS.  As an example, Microsoft said today that Gears 5 is already running at over 100 FPS on Xbox Series X, and developer The Coalition is already working on enabling 120 FPS in all of the game’s multiplayer modes.

To improve the gameplay experience, the Xbox Series X will also introduce what Microsoft calls “Xbox Velocity Architecture,” which will leverage the console’s ultra-fast storage to decrease loading times and improve streaming of in-game assets. “This will unlock new capabilities that have never been seen before in console development, allowing 100 GB of game assets to be instantly accessible by the developer,” the company explained, adding that it should be a huge benefit for large open-world games.

With a 2.4 GB/s bandwidth (4.8 GB/s compressed), the custom-designed 1TB SSD in Xbox Series will play a key role in the Xbox Velocity Architecture. Storage will be expandable via proprietary cards seen below, and these will be required to install Xbox Series X on external storage. However, Microsoft clarified that users will still be able to use slower USB 3.1 external drives for storing Xbox One, Xbox 360 and OG Xbox games. 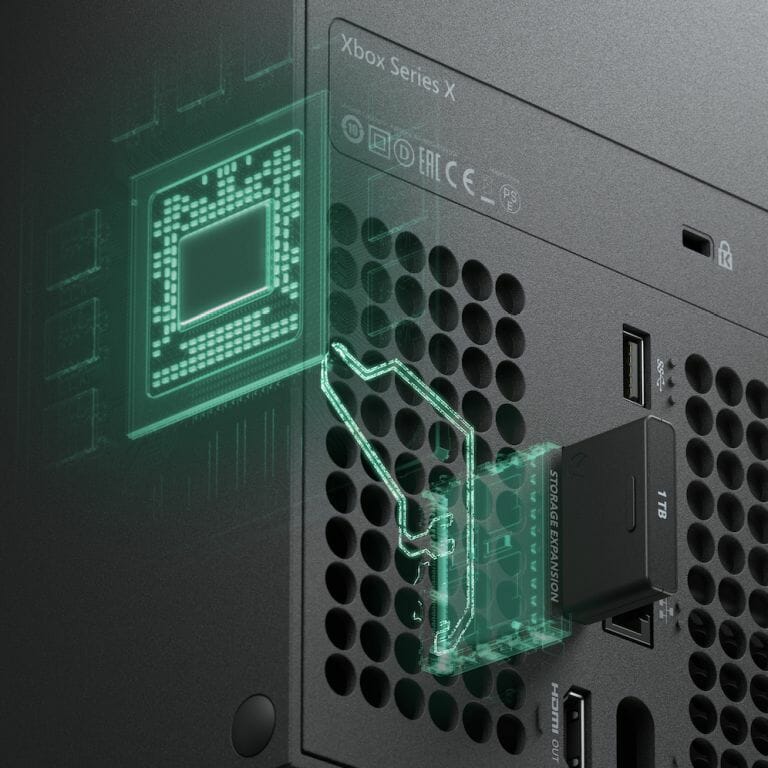 Xbox Velocity Architecture will work in conjunction with other new Microsoft technologies such as Dynamic Latency Input, which should make the next-gen Xbox controllers more responsive, as well as new TV/monitor standards such as Variable Refresh Rate (VRR) and Auto Low Latency Mode (ALLM). “While it can be difficult to notice the improved latency from any one of these improvements alone, when they all add up, it makes for a profoundly more responsive experience,” Microsoft said today.

To go along with all these game-changing technologies, there’s also the new Quick Resume feature, which was previously detailed by Xbox’s Phil Spencer last month: The Xbox Series X will be able to keep multiple games in memory and resume them even after a reboot. Think about a smartphone-like experience, where you can have multiple apps opened in the background and pick up where you left off anytime you want, though Microsoft says that game states on Xbox Series X will even persist after the console has been unplugged. “Since game states will be stored directly in the system’s SSD, they’ll even persist after you turn off the console, unplug it entirely, or even take a system update. One of the testers on the team unplugged his console for a week, then took an update, and was still able to continue right where he left off without so much as a loading screen,” the company said. 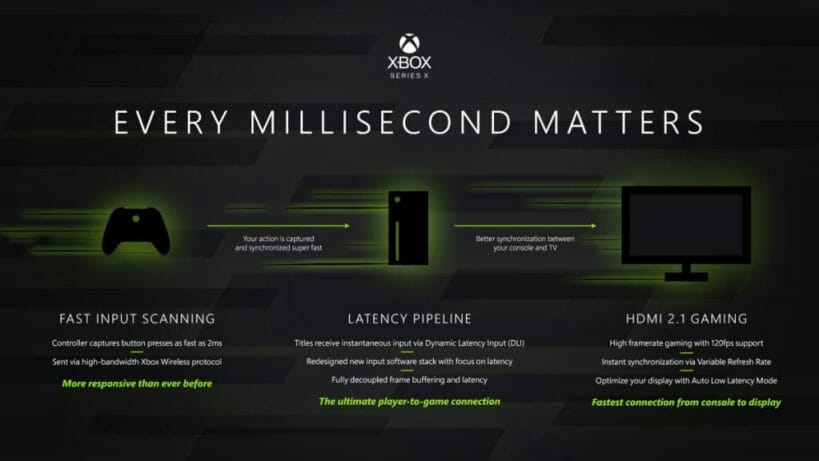 Microsoft’s concluded their long post today with a segment about backwards compatibility: We already knew that Xbox Series X will be able to run all existing Xbox One games, as well as Xbox 360 and OG Xbox games that are already backwards-compatible on Xbox One. However, Xbox One games will run without any emulation on Xbox Series X (unlike how back-compat games are running on Xbox One today), and that will allow Microsoft to use this additional power to run existing Xbox One games at a higher resolution, and possibly higher frame rates as well.

Digital Foundry also revealed that Microsoft is working on implementing High Dynamic Range (HDR) to Xbox One games that currently don’t support it.

We got to see the Xbox One X enhanced version of Halo 5 operating with a very convincing HDR implementation, even though 343 Industries never shipped the game with HDR support. Microsoft ATG principle software engineer Claude Marais showed us how a machine learning algorithm using Gears 5’s state-of-the-art HDR implementation is able to infer a full HDR implementation from SDR content on any back-compat title (…) “It can be applied to all games theoretically, technically, I guess we’re still working through user experiences and things like that but this is a technical demo,” revealed Marais.

There’s definitely a lot of new information to digest today, and we really recommend you to check out Digital Foundry’s post for an in-depth look at Xbox Series X. Microsoft will also discuss Xbox Series X and Project xCloud during the Game Stack online event that will kick off tomorrow, March 17, and we’ll be sure to share more information with you later this week.