Life in quarantine: here’s what I’m using while working from home 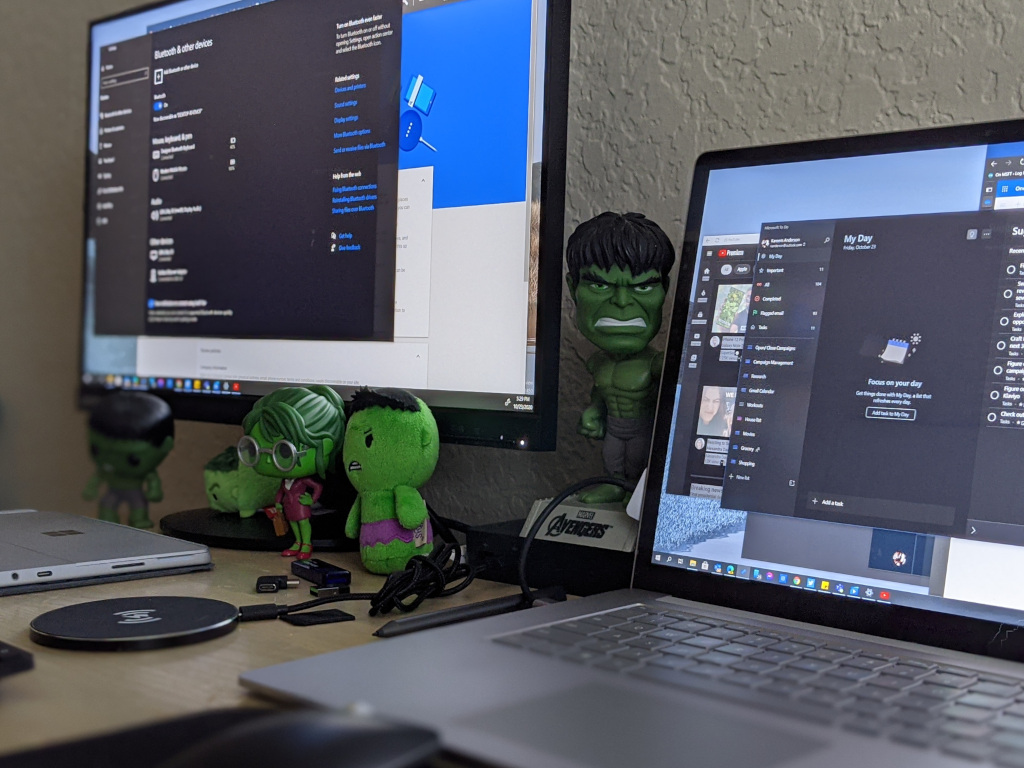 Extended work from home orders has fundamentally changed the way people view home offices. Where once a tiny makeshift desk of a recliner and wobbly lap-placed laptop could suffice for the occasional email triage, is now being replaced with an actually dedicated desk and ergonomic chair for spine alignment considerations during marathon Zoom meetings. Prolonged use of laptops has forced some people to turn them into mobile command centers where sprawling USB hubs extend wired tentacles across desks to power hundreds of peripheral combinations.

As someone who writes and follows tech, I was partially prepared for the unprecedented alternate reality this pandemic has plunged us all into. However, there were some additions I needed to pick up to make it past months of quarantine and increasing workload while I worked-from-home.

Here’s what I used to help stay productive and active during the quarantine, and their Cyber Monday/ Week new deals.

I still haven’t pulled the trigger on a full-blown desk yet, because I’m partially back in my office for my day job. So, I’ve made do with my using what used to be my dining room table as my dedicated work desk. When fully expanded, it’s a 56″ rounded lightly stained Birchwood hand-me-down. 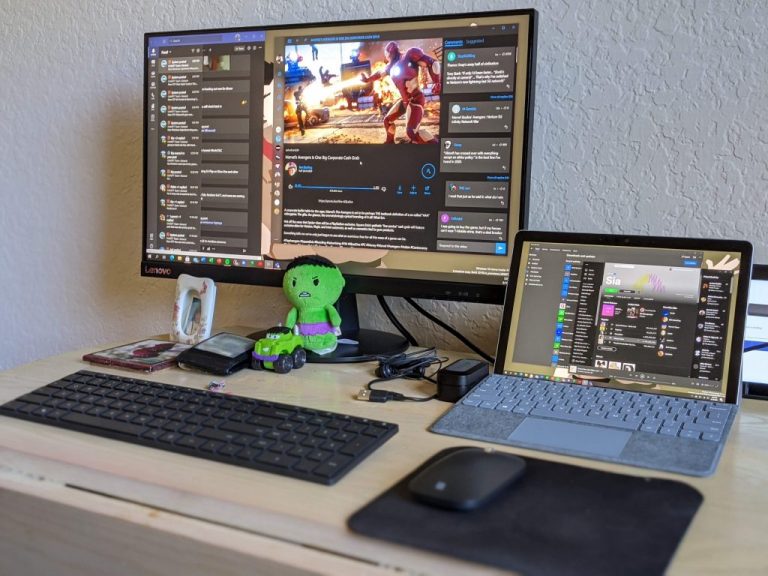 My mother-in-law got it for my family at a swap meet during a road trip in 2018. The sides of the table fold down to a more rectangular desk-like experience. With screw-in bottom placements, the desk can tend to wobble after a few thousand micro-frictions during use. However, on the whole, the dining room table has served as an adequate desk but at some point, I may need to visit a furniture store or Ikea for something more permanent and offering a bit more space for my growing list of computer accessories.

Speaking of which, the heart of my workstation is my recently acquire 15-inch Surface Laptop 3 (Intel). 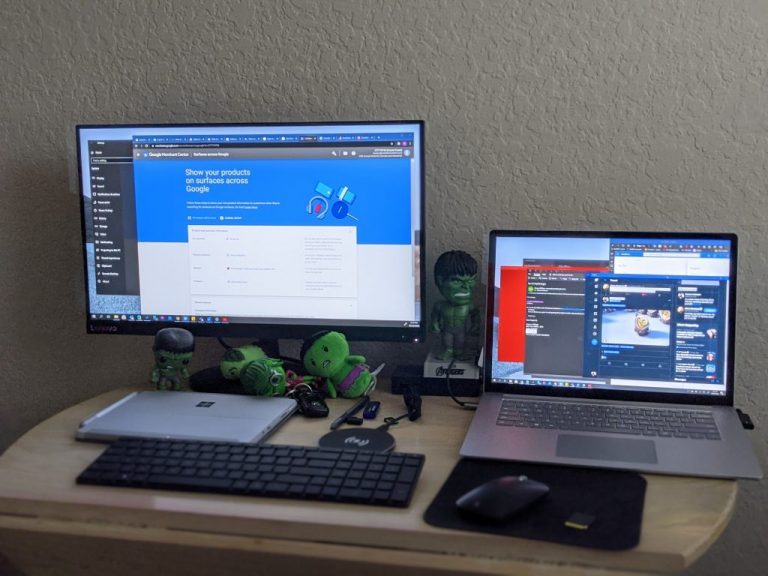 Prior to fellow writer Arif Bacchus selling me his old laptop, I made use of a rotating cast of review units from PC manufacturers such as Lenovo, HP, Microsoft, and Dell. As Microsoft refined the data sync functions of Windows 10 and Edge, it became increasingly easier to shift my data between devices so it made sense to not get shackled to a single device. As a reviewer, I like to make the review unit my main device so I can work through all issues, shortcomings, or improvements offered by the parent company, so there would long periods of time where my own personal computer would simply collect dust. However, recently, I’ve been craving my own personal device and Arif offered a deal I couldn’t refuse.

Perhaps, almost as important as the laptop itself are webcams these days. As we spend more time behind monitors and screens, our meetings have morphed into marathon sessions of Teams, Zoom, Skype, and WebEx where we now have to worry about lighting conditions, fidelity, and background decor. For those times, I use a Logitech C920x, Pro HD Webcam which was recommended by our editor-in-chief Kip Kniskern. The quality when uncompressed is phenomenal at 1080p 30fps, works well in most low-light situations, and the dual mic array serves my voice clearly to my recipients. 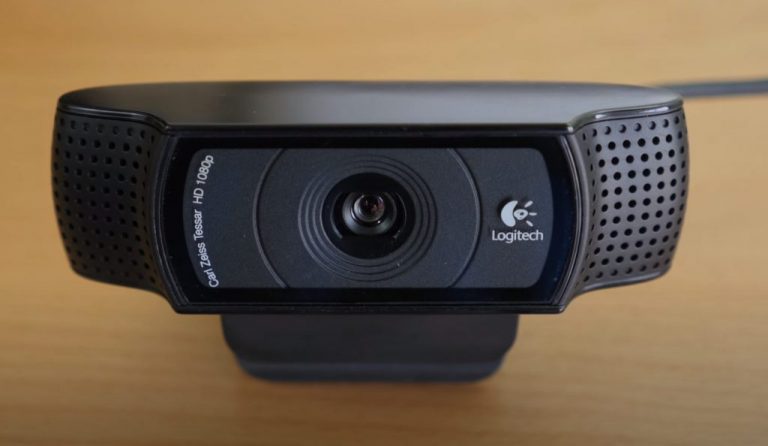 As I mentioned earlier, I used to make do with just balancing my laptop across crossed legs on a single seat and ottoman combination but now that I’m needing to do more than just sort email and push project cards in a CMS, I had to bulk up with a secondary screen. I was fortunate to get a review monitor from Lenovo to write this very piece. I tried out the ThinkVision M14T at first as I made my transition to a secondary home monitor. 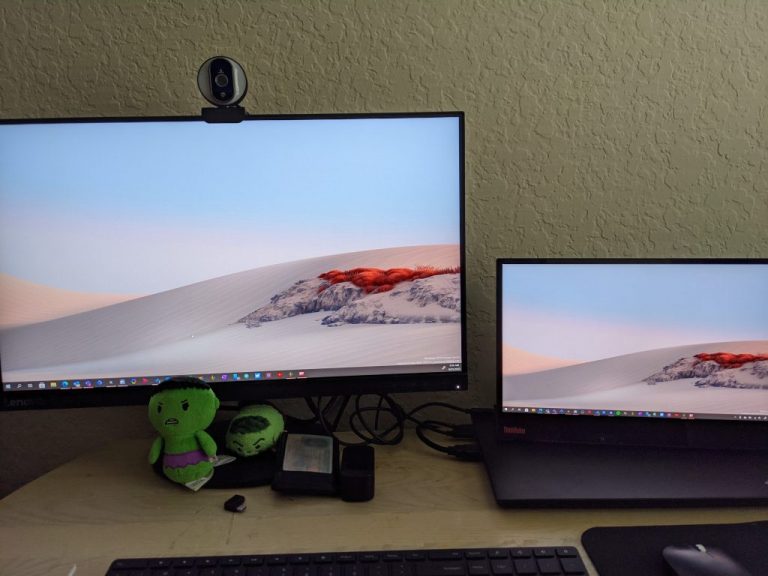 While the tiny plug-in-play monitor was great to tote around the house from room to room, it was just too small to use beyond the occasional extended viewer for minor tasks. The M14T was great as a dedicated USB-C powered gaming monitor while I was able to keep an eye on my streaming setup simultaneously, but beyond tossing a few extra Edge tabs on a different monitor for later reading, I found I needed something a bit more ‘dedicated’ and large.

I finally upgraded to another Lenovo monitor in the Lenovo L24q-30 23.8-inch QHD Monitor. At 23.8-inches, there was just so much room for digital activities.

At 2560×1440 and 99% sRGB and 75Hz refresh rate with AMD FreeSync, the L24q handled everything I threw at it, from graphic design and video editing to game streaming and 4K video playback. Fonts were crisps, details in high dynamic ranges were clear and pronounced and I couldn’t find any instances of tearing when shifting images rapidly. The antiglare coating was useful as were the 178-degree viewing angles when I had to occasionally shift the monitor away from natural sunlight. 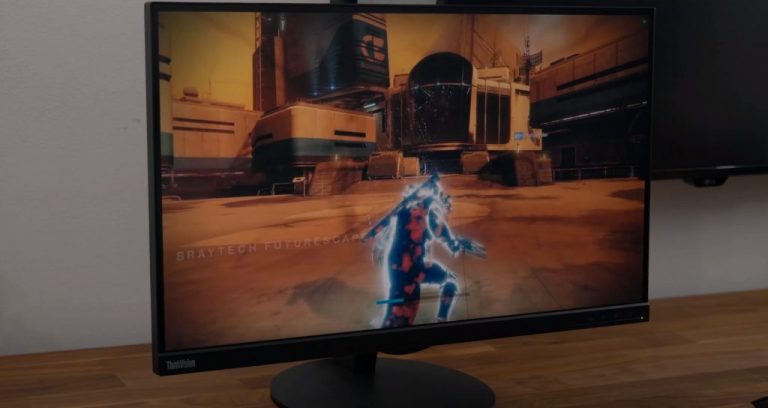 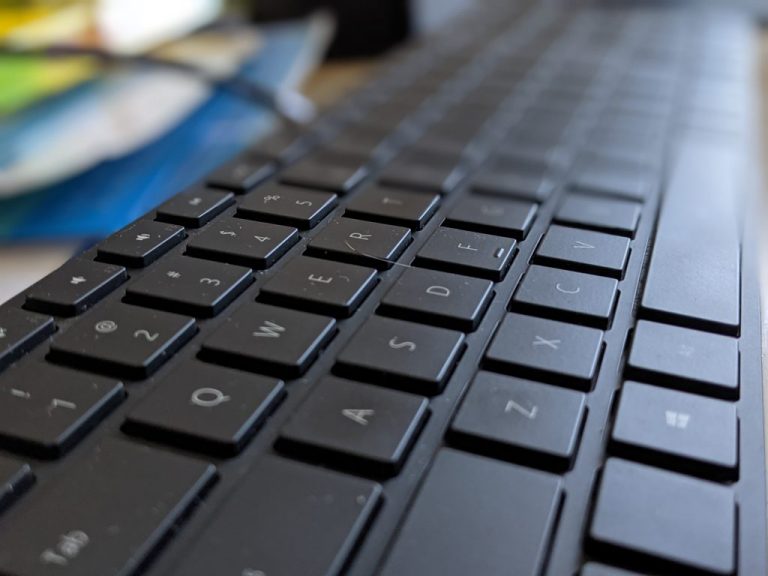 While the Microsoft Designer Mouse isn’t as sleek or cool looking as the Arc Mouse, it’s more than serviceable and for users with long fingers or bigger hands, tends to be more comfortable for a longer period of time. Aside from the key travel and overall feel, the biggest benefit of the Designer Bluetooth Desktop is fewer visible wires and open USB ports when in use. The Bluetooth connection on this combo is super-low latency, the time from a keypress to action on screen is practically instantaneous, and the whole thing can be neatly arranged or even conveniently moved without any fiddling with wires.

Microsoft Designer Bluetooth Desktop from the Microsoft Store starting at $179.99

Cobbling the whole experience together is both the original Microsoft Surface Dock and an Amazon recommended USB-C Hub Multiport Adapter – 7 in 1 portable space aluminum dongle. 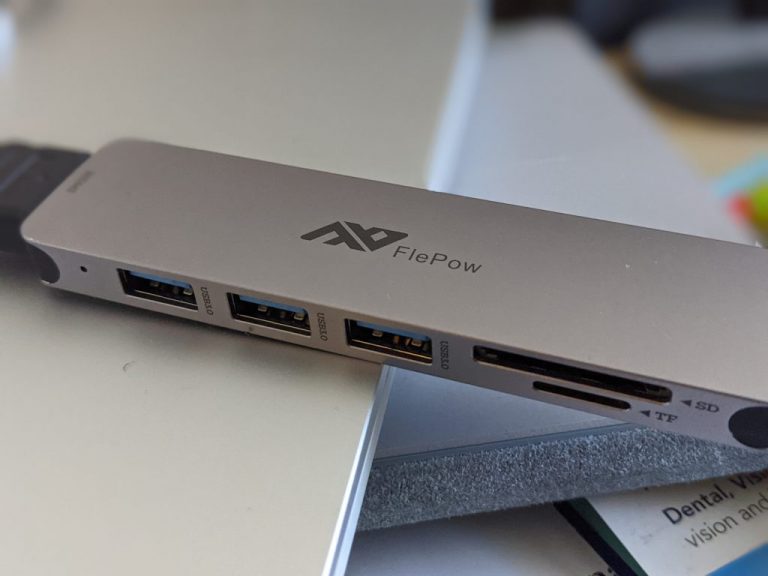 The FlePow isn’t the most discrete looking dongle, but it gets the job done to connect a 4K supported HDMI monitor, 3 USB 3.0 ports, a full-sized SD/Micro SD card, and power and is small off enough to be toted around from desk to desk easily.

With a family of four, all now using the internet, all the time, I beefed up our signal using Rock Space’s Whole Home Dual-Band Mesh Wi-Fi System. With three nodes, I’m able to cover the entirety of my two-bedroom townhome with 3,500 extra sq. ft to spare. 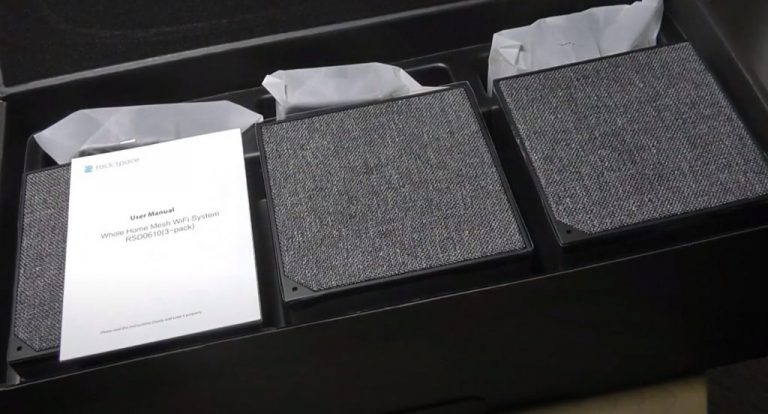 A Rock Space AC2100 Wi-Fi router is helping to push out 1733Mbps on 5GHz and 300Mbps on 2.4GHz, totaling up to 2033Mbps. The Wi-Fi router has helped me test multiple laptops, game streaming services, and a handful of ambient smart home devices all while my daughter’s homeschool via Zoom and my wife hosts her dance classes through various video conferencing software. 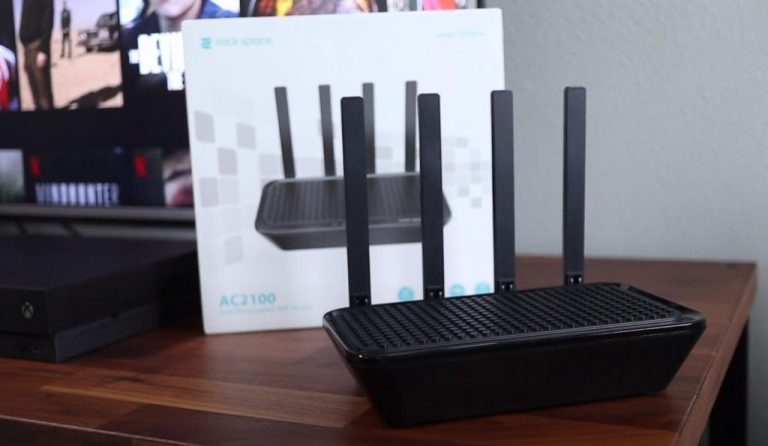 I’ve also gone through a volley of earbuds and earphones to listen to podcasts and audiobooks while working at my desk, doing chores around the house, or going for walks. I oscillate between my Gear IconX (2018) and the FIIL T1X Earbuds. Typically, I spend most of my time on the FIIL TX1’s because of their insane battery life.

The charging case of the TX1’s can be a bit prohibitive because of its relative gaudy size which is why they’re normally homebound and why the Gear IconX’s are brought out. Both have excellent have sound but the FIIL T1X’s offer a bit more bass and play the mids clearer than the IconX’s and for the price, they’re a steal for low latency and super convenient Bluetooth connectivity.

All three of the aforementioned products can be managed from apps found in the Google Play Store which makes for a convenient manageability experience.

When I’m not at my desk, I do the last bit of my work from my AT&T carrier locked Pixel 4XL. Most of my photos and device review footage is captured from my trusty Pixel 4XL. While I flirted with the Microsoft Launcher from time to time on my Pixel, I prefer to keep the stock launcher in place and just load up the default programs with Microsoft powered ones such as Edge, Outlook, Microsoft Authenticator, To-Do Lists, etc. The experience is quite nice, but I am looking to delve into the Surface Duo 2 when that comes out with hopefully a better camera and more consistent software experience. 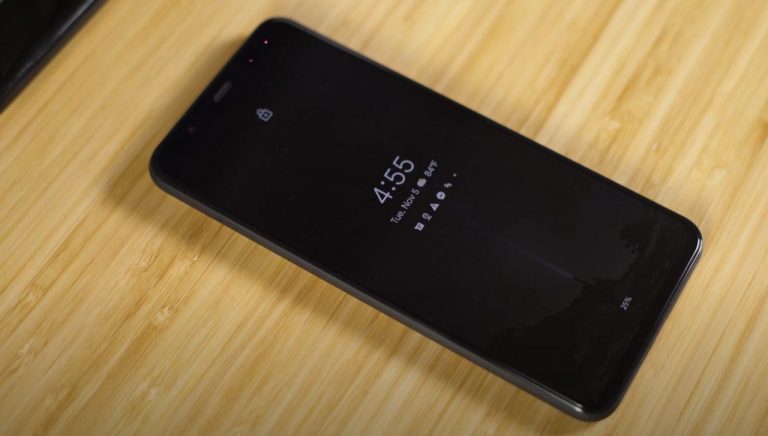 My quarantine gear is constantly evolving as new needs arise, so I plan on doing this again as I refine my productivity, creativity, and workflow into 2021.