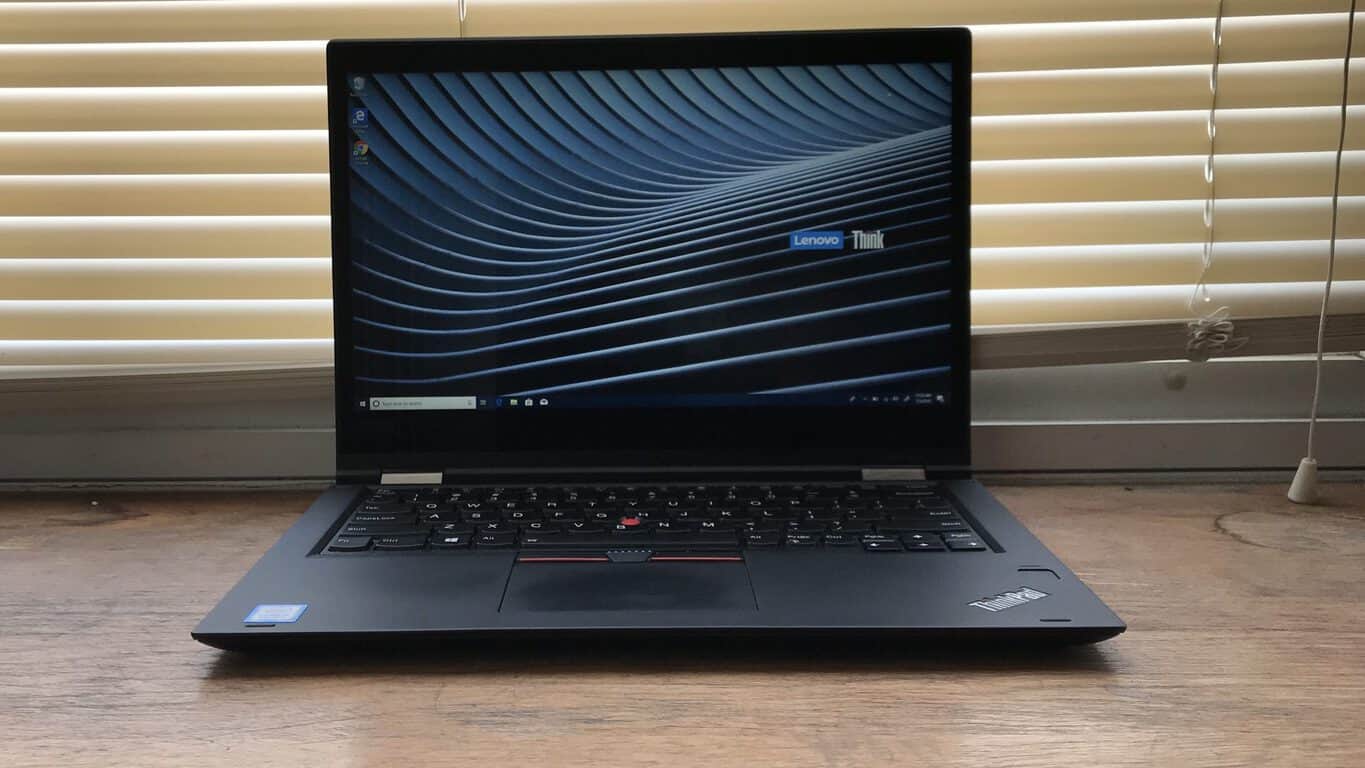 If you're a professional or a student that is always on the go, you likely won't want to lug around a heavy laptop to and from work or school. Enter the X380 Yoga, a compact little device that is designed for those who want the flexibility of a 2-in-1, but also the feel of a traditional ThinkPad laptop. I've been spending the last 3 weeks with this device, and here's more on my overall experience.

Our review unit is powered by Windows 10 Pro, and an 8th Gen Intel Core i7-8650U processor clocked at 1.9 GHz. It comes with a total of 8GB DDR4 2400 MHz RAM and a 512GB PCI-E NVMe SSD. The model we have is available from Lenovo for $1,223, but you can customize to your liking. Other specs which will come up throughout this review can be seen in the photo below.

As with all ThinkPads, the Yoga X380 is made of a black colored carbon fiber hybrid material. It's 12 MIL-STD 810G graded and looks very simplistic--- two things that are very important to me when traveling with an expensive device on the go. Of course, you'll also find Lenovo's patented 360-degree hinges, which work perfectly and are strong enough to switch the device into its four different modes. And, coming in at about 3 pounds and 12.3 x 8.8 x 0.7 inches, the X380 Yoga manages to keep a compact small footprint.

At 13.3 inches and 1920 x 1080 FHD resolution, the display on the X380 is bright and vivid enough for any task. You can expect a total of 308 nits of brightness on this unit, which is the standard on most devices in this price range. This meant that when in laptop mode, I didn't need to keep the brightness high and a medium to low setting was just enough for my needs.

Multi-tasking worked surprisingly well, as I was able to head into the display settings and tune down the scaling for more room for my windows. For my web-based writing work, the brightness also meant text on web pages and images were crisp and clear when rendering. I can see this working well for those who spend time in spreadsheets and word docs, as the screen is pretty easy on the eyes.

I also used the device in tent mode to watch Disney Pixar's Cars 3 in FHD. The reds in Lightning McQueen's paint job were especially bright, and the colors from the other cars on the track popped right out. Though I mainly used the X380 for work, I did enjoy the fun when using it for multi-media too.

Lenovo includes a ton of ports on the X380 for ultimate versatility with your accessories. You'll find both modern ports and classic ports for your older accessories too. This is something that has always made me love the ThinkPad Lineup, and I am glad to see the trend continue.

On the right side of the device, you'll find the power button followed by the slot for the Integrated ThinkPad Pen Pro (more on that later.) There is then the headphone jack, the Micro-SD Card Slot with an option for a SIM, USB 3.0 Port, an HDMI port, and the Kensington Lock.

I liked the option for the Micro-SD card, as these make for a nice way to double up on the included storage without breaking the bank. I also appreciated the HDMI port, since I didn't have to go out and buy dongles just to connect to my monitor. I think these are again two very important things for road warriors who are always on the go.

Anyway, on the left side, things are a little less busy. We have Lenovo's proprietary power port, followed by a USB C Thunderbolt 3 port, and the Mini-Ethernet RJ45 port. Lenovo even throws in another Always-On USB 3.0 port. There's also extra peace of mind since Lenovo protects the port with Anti-Fry technology for when poorly designed USB-C products draw or give too much power.

At the end of the day, you're seeing a mix of modern and traditional ports here, so you won't have to worry about your accessories not working with the X380. You're also getting Thunderbolt 3, which is the USB C that does it all.

Reminiscent of my ThinkPad X200 from way back, the keys on the X380  have a spongey soft touch when mashed down into the chassis. I really liked this feel as it provides some comfort for my fingertips when writing long-form articles.

Another feature that I liked on the X380 keyboard is what Lenovo is calling a Lift n Lock technology. This means that when you rotate the device into each of the non-laptop modes, the keyboard bed will retract into the chassis and lock in place, disabling the keyboard. Again, this versatile feature provided a comfortable feel for when I used the device in the 2-in-1 modes. I didn't have to worry about my fingers jamming on buttons when in tabet, tent, or stand modes.

As for the buttonless touchpad, it's otherwise very standard. It is coated in mylar and comes in at about  3.5 x 2.1-inches, which is more than enough room for Windows 10's touchpad gestures. Lenovo also throws in the TrackPoint nub, which proved a little useful for me when I wanted some more precision clicking. It's just OK, and there isn't anything fancy about it.

Included onboard the X380 Yoga is the Thinkpad Pen Pro. This pen slots into the right side of the device and comes with a total of 2,048 levels of pressure sensitivity. That might be half the sensitivity of the Surface Pen, but I really didn't see the difference on my end.

I honestly never really used the pen very much outside my testing period, but I preferred the convenience of knowing the pen is always there over anything else. When I did use the pen, it was smooth and easy. Access to the two side buttons was tough, but the pen itself easily dragged across the screen with minimal friction. This made drawing easy and nothing held me back between my strokes in Fresh Paint when in tablet mode.

Lenovo tells me that a 15-minute charge in the pen slot will allow for up to 100 minutes of use. There's also a firmware algorithm onboard the X380 Yoga which improves palm rejection. I tested this for myself, and I saw about 4 hours of pen time before it stopped responding on the screen.

The X380 Yoga has options for a Windows Hello Camera, but our unit comes with a fingerprint reader instead. Just as with all other Lenovo laptops, it is speedy and quick. It instantly IDed my finger when I on the Windows 10 lock screen, like an iPhone and many other of my devices. Lenovo also lists that some units come with Intel's VPro technology, but that wasn't on board our device.

I'm not the kind of reviewer that will bore you with full-on tech specs in the terms of performance. I instead put my review units through my own daily real-world testing. That said, the X380 Yoga easily handled all my usual tests, like editing photos and working with 15+ tabs open in Edge. You can take my word for it, or check out the standard Geekbench 4 scoring. The 8th Gen Kaby Lake R processors really make a difference here and give more room for processing power. You can see this in the scoring below in comparison to other Lenovo review units from 2018.

Nothing slows this unit down, but the fans will kick in easily if you stress it out too much. That'll also heat the device up, particularly in the corners right where my hands usually rest. It's just one small fault in an otherwise perfect bit of performance.

As with all devices that come equipped with a touchscreen, you can't expect all-day battery life. In my daily usage of the X380, I got anywhere from 5-6 hours of battery. That's only with web browsing and some slight multi-media usage, so I'm assuming this is what most people would expect in the real world. But with the device supporting Rapid Charge tech with 80% of charge in 1.2 hours, you'll get a charge real quick.

Putting everything into perspective, The X380 Yoga is an all-around solid device. Though it is obviously priced a bit high, you're getting a versatile device that feels just like a traditional laptop. The specs are well up to date, and performance is solid. The display is very bright and vivid, and the Thinkpad Pen Pro is easy to stow away and use. It is like you're getting four devices in one, and with some solid battery life. You can buy the X380 Yoga from Lenovo here, with prices starting at $1,223, going up all the way to $2015.10.

Microsoft opens up a flagship store in Taiwan, the 9th in Asia