Lenovo ThinkPad X1 Nano could be the "lightest ThinkPad ever built"

According to new roadmap leaks, Lenovo appears to be planning a rather significant hardware upgrade to several of its devices for late 2020 into 2021.

While the company remains silent about the leaks, the deluge of images and spec details continue to flow and the most recent find by Twitter sleuth @WalkingCat showcases a new ThinkPad with similar bezels and 17 hours worth of battery life.

Based on the leaked device roadmap, Lenovo plans to release a new ThinkPad X1 Nano, which introduces all-new reduced bezels and a reduction in weight to the flagship chassis of the X1 lineup.

According to the leaked image, the X1 Nano is spec'd to come in at 14.8mm thin with a 13-inch 2K display and options for touch as well as 4G & 5G connectivity. The Nano will also be powered by an Intel Tiger Lake 15W chipset with up to 16GB DDR4 RAM. While the Nano is shaping up to the nicest spec'd X1 to date, the details regarding its I/O could be troubling for some, with the device only reportedly coming with two Thunderbolt 4 USB-C ports and a single audio jack. 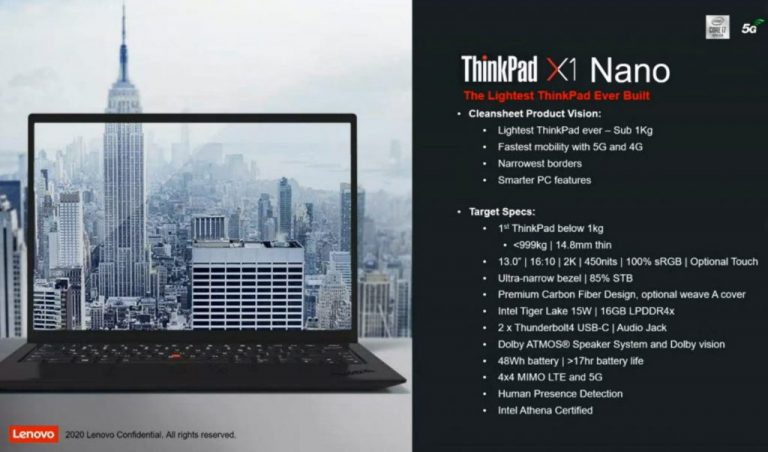 However, if users can get over the limited I/O selections, Lenovo is promising up to 17 hours of battery life, which is a refreshing change from the company's former benchmark phrase of all-day battery life, which usually fell well short of the claim.