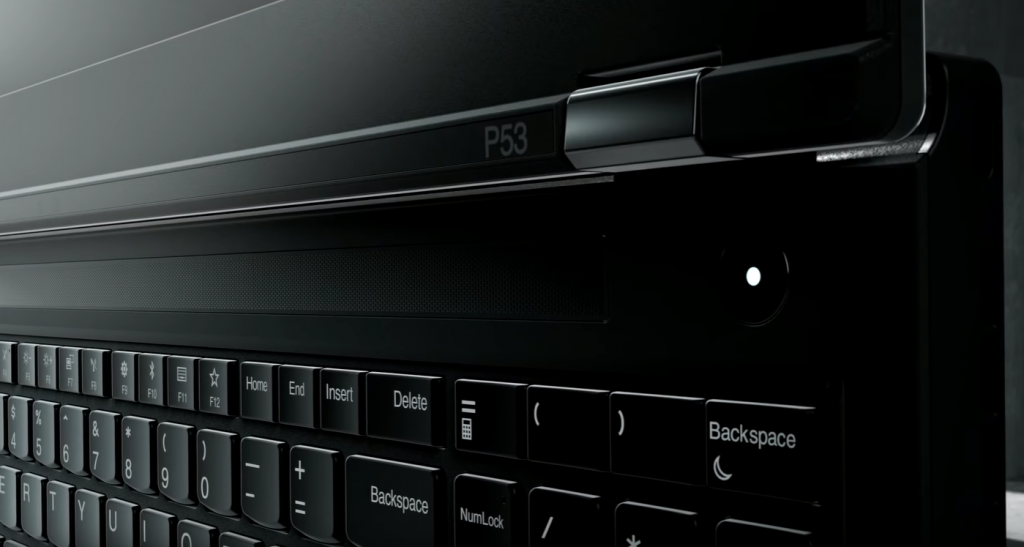 Gonna start this review off by addressing the elephant in the room regarding the definition of a "mobile workstation" being a subjective matter and that something like an iPad connected to a couple of Bluetooth accessories could make for the "ideal" mobile workstation.

However, anyone who is looking to pack a bit more power and versatility, Lenovo's ThinkPad P53 puts an Intel Xeon 8-core E-2276M CPU and NVIDIA Quadro graphics in their latest top-end mobile workstation.

For most consumers, the ThinkPad P53 will not be considered a real option based on design or actual workflow or accessibility, but for those who are actively looking to port around a beast of a computer that isn't gaming related, it should be right up their alley.

Off the top, the Thinkpad P53 can come equipped with a 9th generation Intel Core i-9 vPro with Turbo Boost and 8 cores with 16MB Cache. On the flip side, some owners can power their device with an Intel Xeon E-2276 vPro with up to 6 Cores and 12MB Cache if you're trying to broaden your PC usage to include some light gaming or 4K video editing. 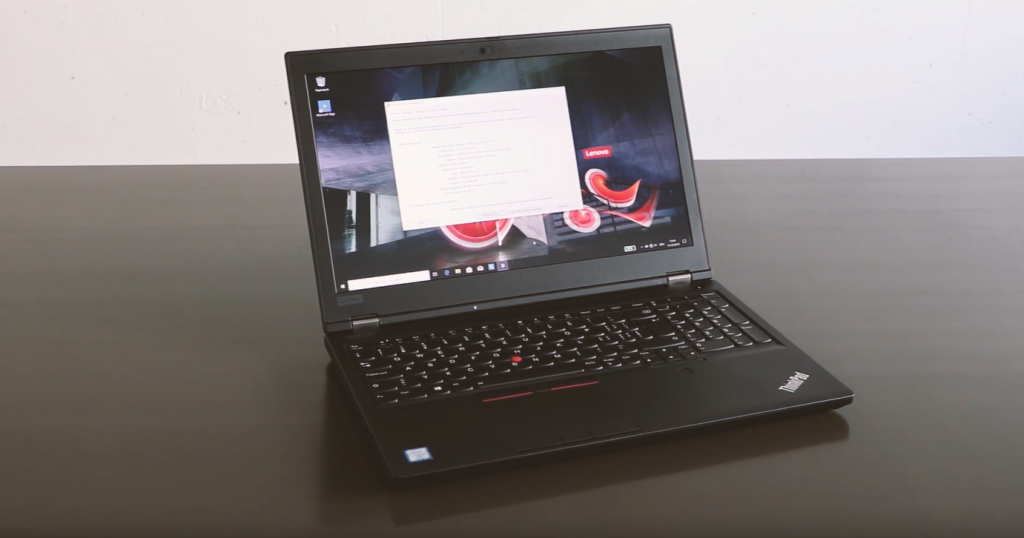 Additionally, the screen propels the graphics being powered by the NVIDIA Quadro graphics chips that help push those Auto CAD, 3D Slash, Blender and LibreCAD designs.

Fortunately, the P53 also comes with up to 128 GB DDR 266 MHz memory to keep all stored application data fresh as well as fly through the often murky OS of Windows 10's older system functions for enterprise use that included trips to the dreaded land of IE 9 and 11.

The P53 is a tank of a device weighing in at 5.51 pounds (2.5 kg) but the heft of the device is warranted as it houses a 90Wh battery that supposed to power 16.5 hours of productivity and a whole host of ports. 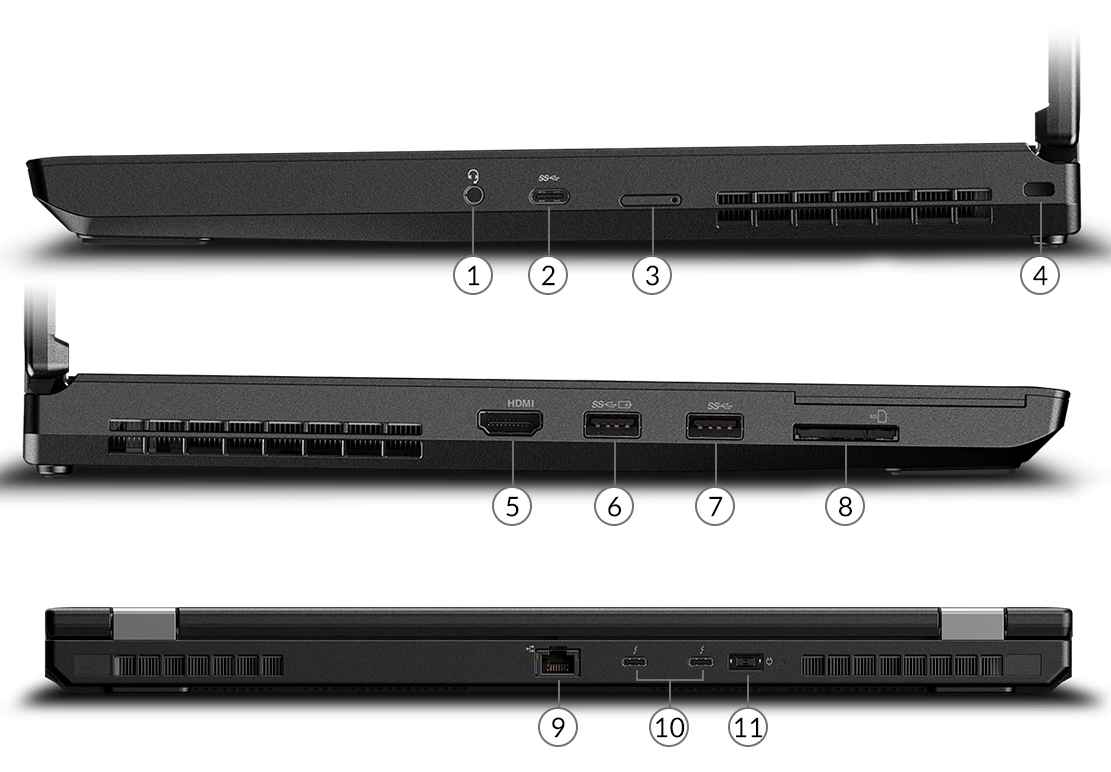 The military-grade combination of magnesium-aluminum alloy and carbon fiber chassis has been tested against 12 -grade requirements and over 200 quality checks to ward against the elements that include sand, heat, cold, spills and even drops.

Lenovo's matte screen technology continues to push limits in its resolution game. For the review unit I received, came with a matte screen that gets plenty bright and clear with its 15.6" HDR FHD panel and anti-glare technology that comes in handy outdoors or in some oddly lit offices. It is not a touch screen but it for something I believe works best with on a desktop hooked to some really nice 4K monitors, I didn't miss the omission. 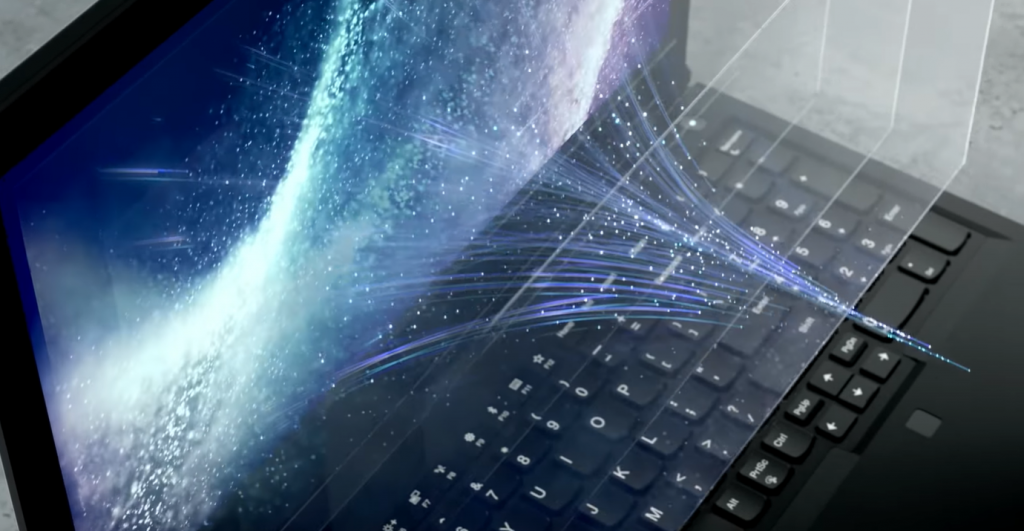 Reviewing PSD files, website editing and watching movies, were as expected from displays in 2019; clear and bright.

The P53 is loaded with ports. It had ports I didn't even know what to do with, so for anyone annoyed with the recent trend in port reduction, the P53 may be the single best option on the market. Lenovo has bucked the trend of slimming its port selection on devices to only USB-C like other competitors, rather optioning to include the famed USB-C port as an addition to its many other options. 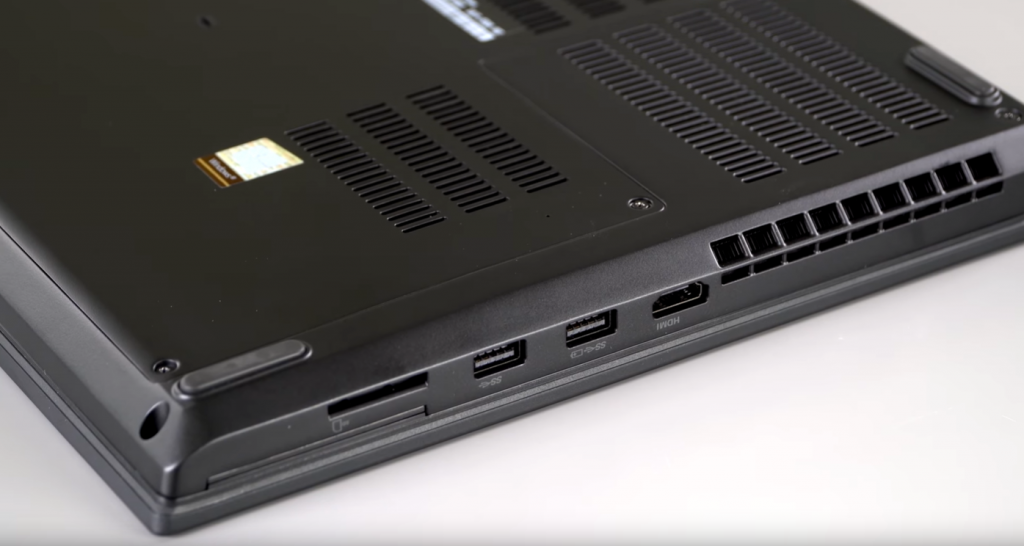 As I said earlier, I really believe this thing is meant to live on a desk with only the occasional lateral movement from its resting spot to maybe a conference room, and then back.

There are seven screws that hold the bottom of the P53 to the rest of the device and replacing or upgrading memory, wifi cards and SSD storage while also easy access to the 90-watt battery to replace when its charge begins to dim.

Also under the hood is the legendary Lenovo U-shaped chicklet keyboard with a touchpad that supports all of the Windows 10 gestures and full numerical keypad for quick Excel work. The red nipple remains in the center of the board and the double button click pad looks to be about the same size as the P52 from last year.

There is also a meek 720p front camera that looks muddy during conferencing but I think most people on both ends, kind of expect that sadly in 2019. Lenovo also tossed in its ThinkShutter switch to block spies and hackers from looking up your nose as you work. 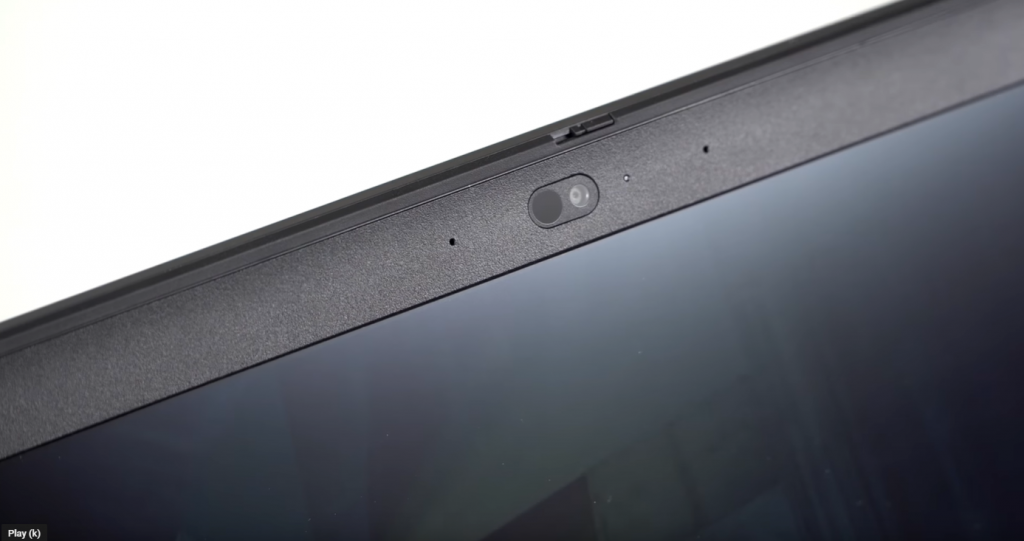 While the P53 does boast about its Dolby Atmos support, the speakers were at best, laptop speakers. The sound remained tiny and pushed shallow bass while still getting pretty loud and crisp treble for most instances.

While not the most stylish package, in my opinion, the P53 does what it's designed to do rather well and my interpretation is moved from desktop to desktop in a relatively convenient manner.

The P53 is heavy, the fans do kick in when engaging in 3D rendering and the magnesium bottom does get heated when using AutoCAD. The battery life is about what one would expect, typically getting 4 1/2 hours of screen time with moderate use and just over 2 and a half when pushing the limits of its GPU and memory. 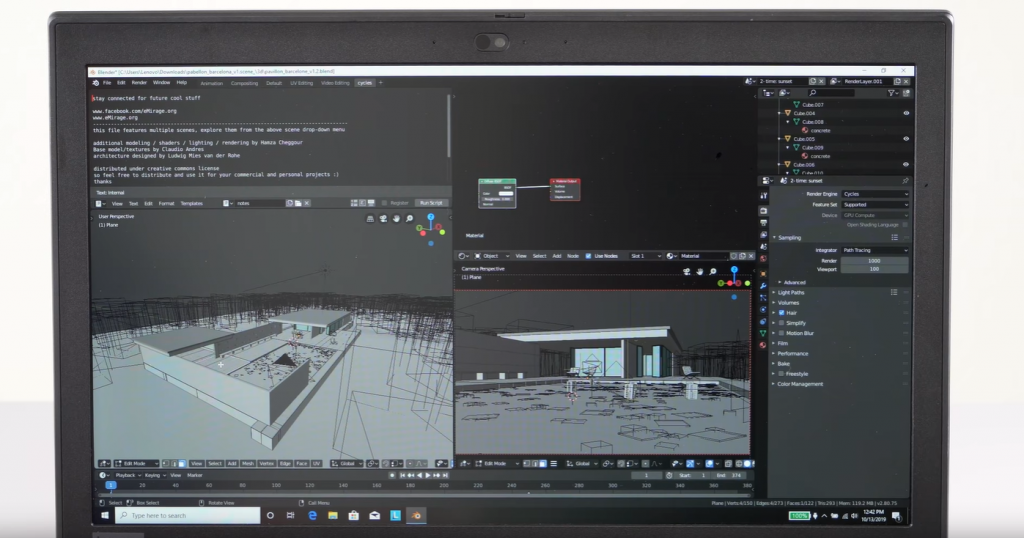 What really sets the P53 apart from say a ThinkPad P1, P72, or decked out Dell 5000 series is its expandability and its jump in Quadro graphics support. Not many in the mid-high tier workstation price brackets come with Quadro T3000, T4000, T5000 graphics chips for the price. 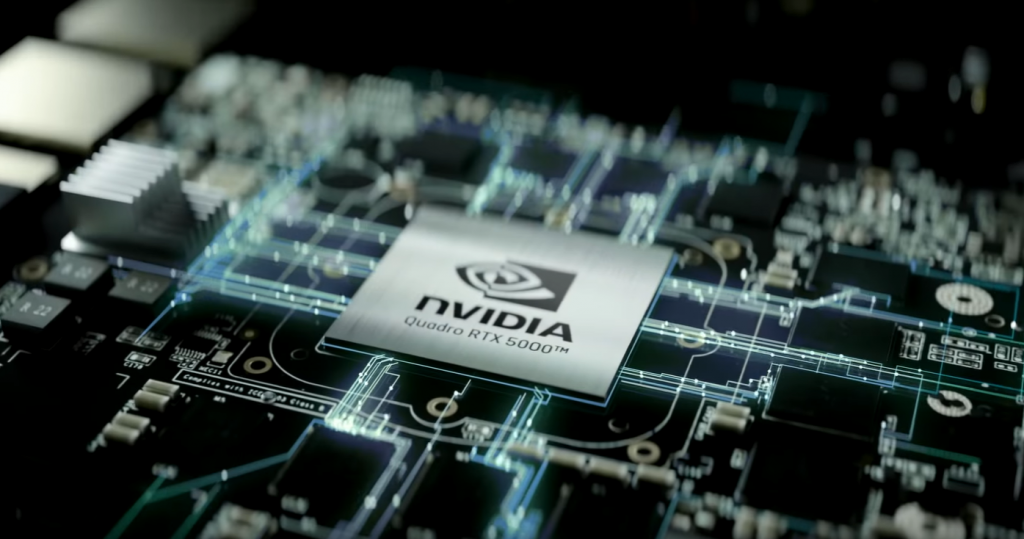 For a little under $1,800 (assuming wholesale prices are even cheaper) an engineer (or student), architect artist or designer can lug around a system flexible enough to render complex AutoCad line types, process multilayer musical tracks as well as import and export hundred plus layer Photoshop images with ease.

I personally work in marketing and spend much of my day downloading and exporting PSD files, surfing multiple open tabs in Edge and Chrome, manipulating formulas in Excel and putting all that data into multimedia slides in PowerPoint, SharePoint, and Teams.

When reviewing something like the P53 I have to go out of my way to push its limits and barring the relatively poor battery life experience, it's a device that can check a lot of boxes for people who know how to use it.

I did make use of the numerical keypad when it wasn't connected to my Bluetooth keyboard which also has a numerical keypad. Not having to reach up to my number row to input pricing, formulas and bid adjustments was a time-save in my opinion. 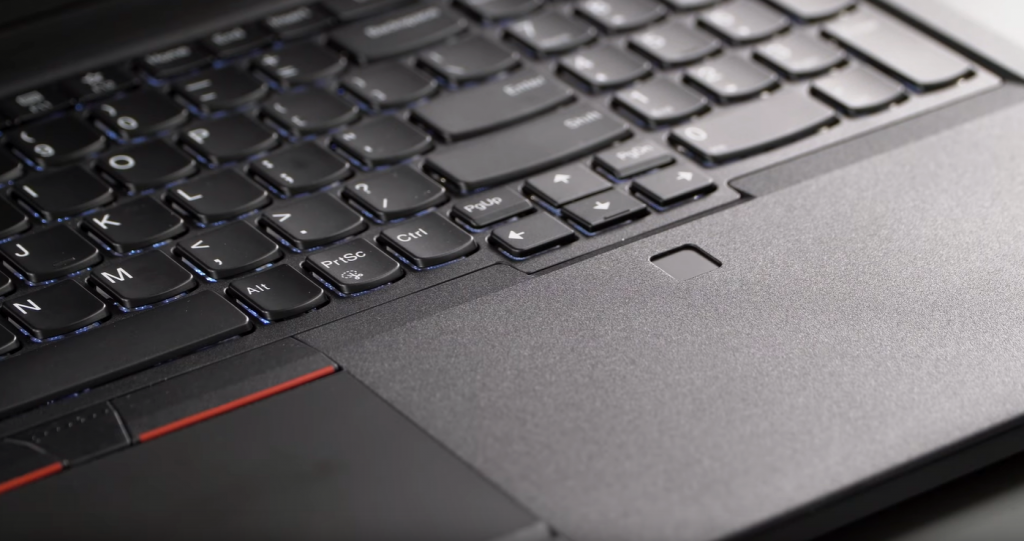 Another benefit of the P53 was the ability to play around with a wifi enabled device. I don't currently have a separate data plan for my laptops but I chucked my review SIM into the P53 and it worked like a charm. In my brief testing, the P53's WiFi-6 certification offered little to no buffering in most situations when pushing and pulling data from FTP's on the go.

In the end, the P53 is a very niche device that handles its niche fairly well. The only reason it's getting an A- from me is that in 2019 claims of 16.5 hours of battery life at least need to be within the ballpark. Routinely, the P53 would need to be charged (when not in desktop use) every four or so hours, which well short of the 16.5 claims.

I understand this is a "mobile workstation" but I feel part of the mobility comes when I can work just as hard on the device away from the desk as I do at my desk and that wasn't the case most of the time. When on battery mode I had to delegate my workload to review dense files rather than creating them, as I did at my desktop.

Aside from the short battery life, the P53 is a solid improvement on the P52 and comes with a nice little Quadro bump making it a worthwhile investment with longevity in increasingly resource-hungry work environments.