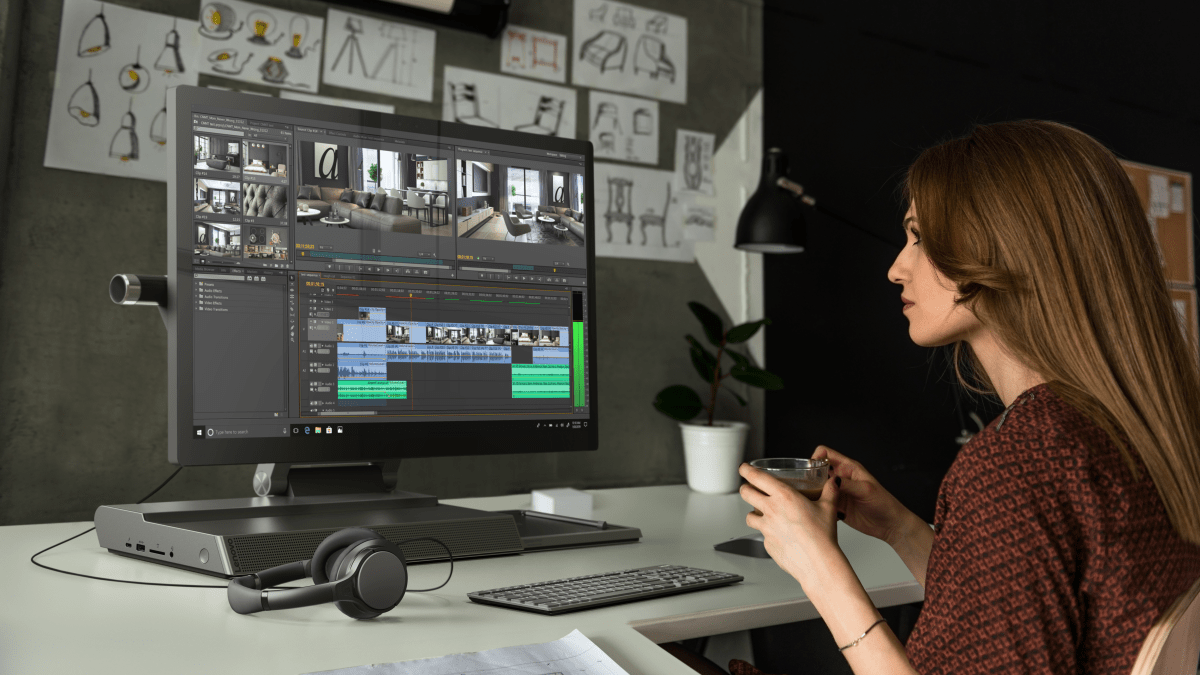 According to Microsoft, its Surface line of devices are meant as reference points for PC related hardware, despite many of them competing directly in sales at retail stores. Many of Microsoft's OEM partners are encouraged to follow in Microsoft's footsteps in designing aspirational devices such as the Surface Pro, Surface Book, Surface Laptop (perhaps experimenting with 3x2 screen aspect ratios) and Surface Studio but at a more consumer-friendly price range.

However, until recently PC manufacturers have only been baited into testing the waters of the 2-in-1 form factor of the Surface Pro while refining their own traditional clamshell Surface Laptop competitors.

That was until Lenovo crafted an All-in-One computer that is eerily reminiscent of the Surface Studio.

I believe the Lenovo A940 is the first device with an articulating hinge and USB connected in-app control dongle that matched wits with the Surface Studio's hinge and Surface Dial. Comparatively speaking, it seems Lenovo took into consideration a workflow beyond its designer-friendly 27" sliding display, unlike the Surface Studio, by including the processor, I/O ports and graphics chips necessary to be a well-rounded workstation.

In addition, Lenovo made economical space considerations with its AIO base to incorporate a tray area for users to store their Bluetooth connected keyboard and mouse as well adding a spot for support of the multitude of wireless powered devices the average person carries these days.

I spent the last month day in and day out with the Lenovo A940 while only having some cursory time with what I believe is its direct competitors in the Surface Studio and even Apple's iMac 27-inch.

On paper, the Lenovo IdeaCentre A940 is every bit as competitive as the iMac and Surface Studio and in some ways a more well-rounded piece of kit.

Out of the box, Lenovo packs the A940 with the latest Intel Core i7-8700 processor that includes a Turbo boost (3.20Ghz) and up to 4.60 GHz, 6 Cores with 12MB Cache. Comparatively speaking the Surface Studio rocks an Intel Core i7-7829HQ quad-core 45W CPU which tweaked laptop-class processor.

Another area where the A940 increases its competitive lead is with memory out of the box sporting 32 GB DDR4. The Surface Studio offers a model configuration that also includes 32GB but customers will be paying a premium for that upgrade to the tune of $3,499.00.

Where the A940 does come up short is its GPU support which may keep some 3D, movie and visual effects designers from plopping this onto their desks this iteration. The A940 makes use of an AMD Radeon RX 560 with 4GB memory capacity which is slightly below the iMac's 570X and even further behind the Surface Studio's NVIDIA GeForce GTX 1060 and 1070. 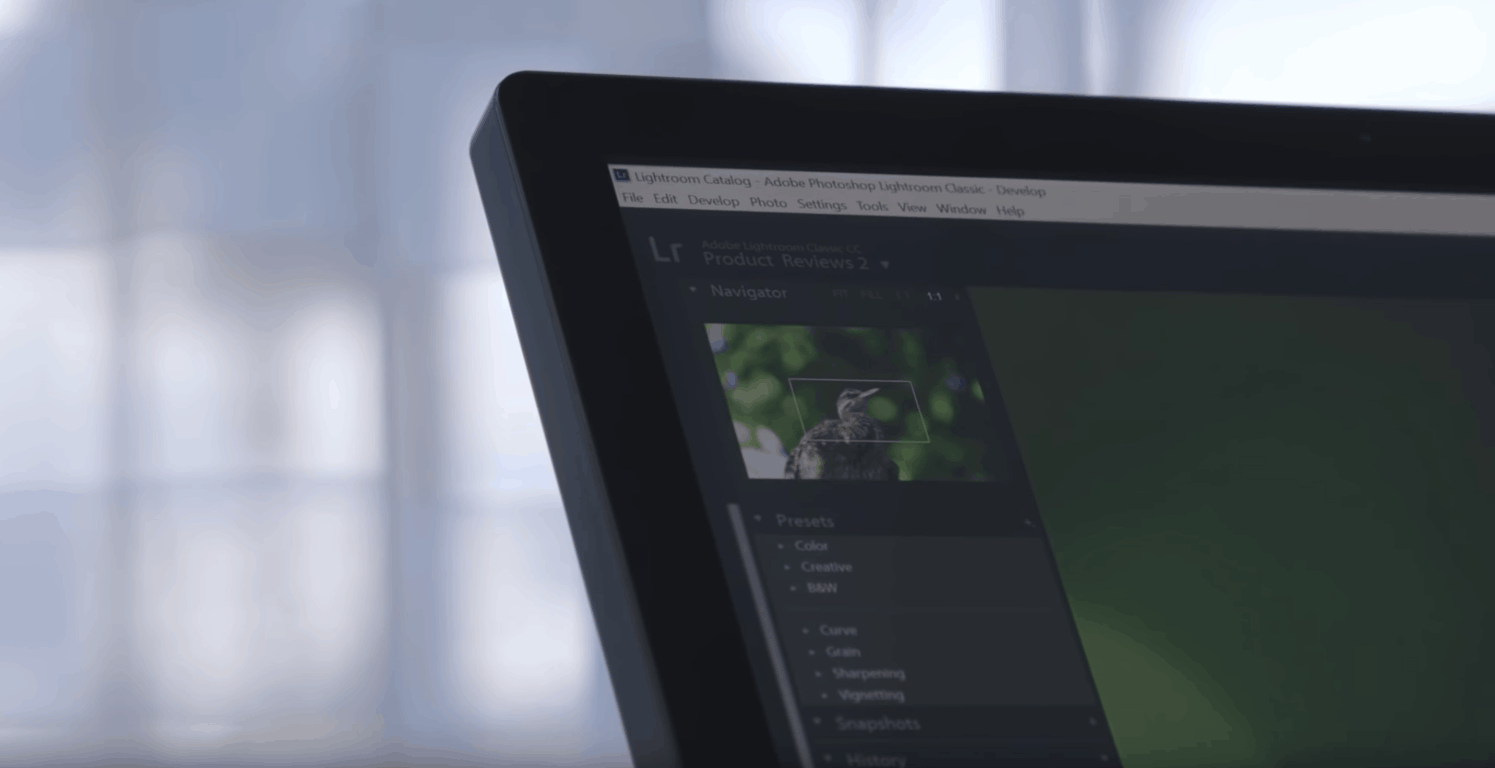 The entire A940 package is rounded out by the inclusion of 1TB of mixed storage with 256 GB of PCIe SSD allocated, an Intel Thunderbolt port, 5 x USB 3.0 and 3.1 ports, 3-in-1 card reader, HMDI slot, audio jack and IR camera with Windows Hello support.

However, in real-world workflows, the A940, Surface Studio, and even the iMac at either an i5 or i7 perform outstandingly. As I said, I only had brief in-store time with the iMac and Surface Studio but I attempted to replicate much of my web-based workflows and substituted downloadable program-specific tasks with a performance test.

While I'm not a Pixar level designer or artist, I did try and operate the A940 as it's being primarily marketed by Lenovo.

Meet the Yoga A940. Featuring a 27" tilting 4K display with pen support, a content creation dial, and other innovative solutions, it's an all-in-one PC engineered to provide the ultimate workspace for your creativity.

I often rotated the hinged screen to its 20-degree angle for notes, doodles, drawings, and Adobe image projects. Thanks to the handy side implemented Content Creation Dial, I had little worry about resting portions or all my weight on the screen during long periods of drawing or image editing. 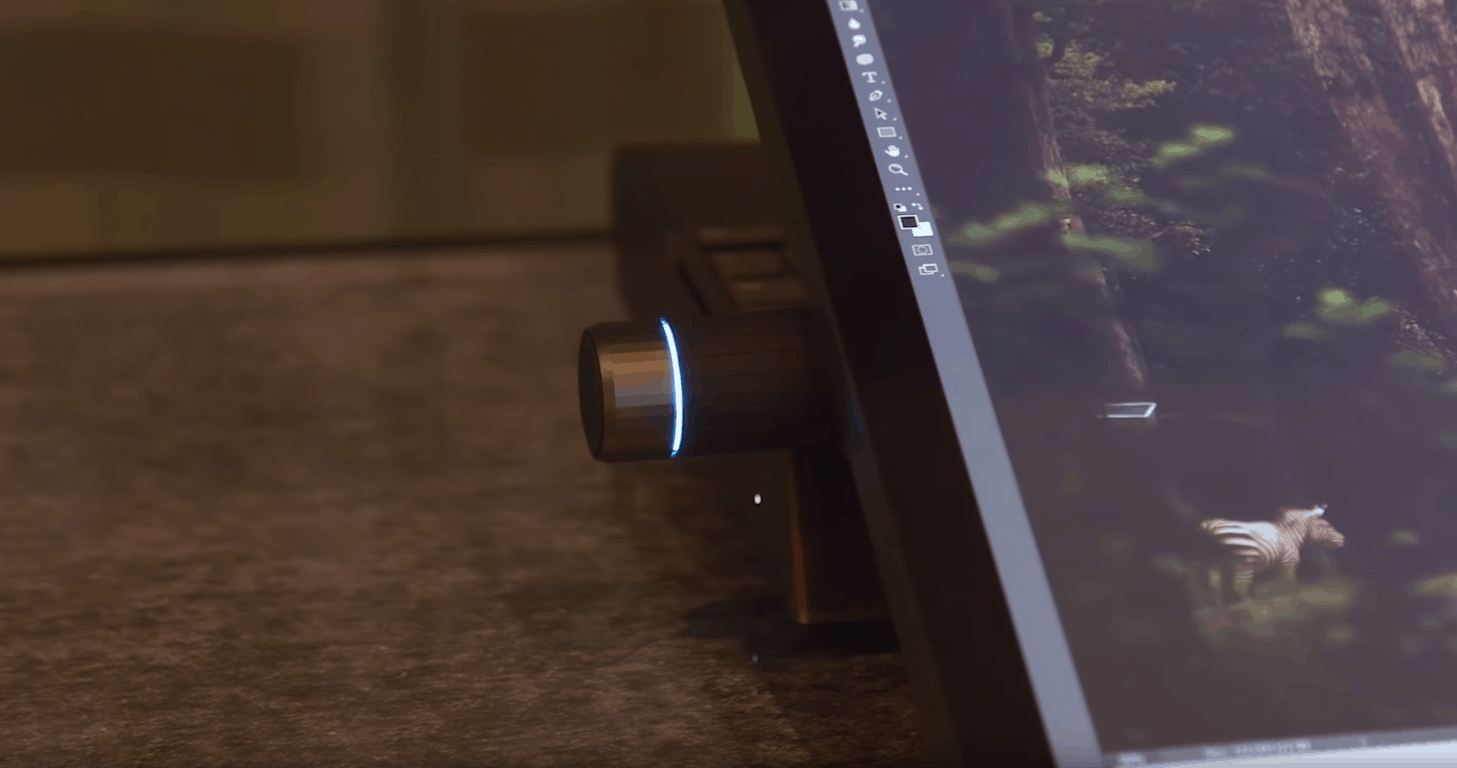 Despite the lower spec'd GPU in the A940 most of what I worked on, went rather smoothly, the only time I got some hiccups in performance was during some 4K video editing, gaming and heavily layered PSDs. Alongside some pixel drag, the machine would go into leaf blower mode quite often making night work with two light sleeping toddlers practically impossible.

For the tasks related to my day job, the A940 flew through all of it with ease, from multiple Marcos Excel docs to multiple instances of open Chrome and Chromium Edge tabs loaded with extensions.

Gaming on the A940 is average, as expected. Despite the beefed-up RAM, the GPU and graphics chip, there is no real benefit to gaming on this device over a dedicated gaming rig. If the idea is to consolidate devices and expenses, then the A940 makes for a decent desktop gaming experience depending on the fidelity of the game.

One of Lenovo's big selling points for its devices is its out-of-the-box experience where keyboards, mice, and pens come included with the sticker price and ready for use immediately. In the case of the A940, all of the aforementioned accessories are included in the package as well as its pivotal Precision Dial, unlike the Surface Studio and its Surface Dial.

Instead of the screen mounted magic of the Surface Dial, Lenovo approached its Precision Dial implementation with a more practical side USB attached connection. 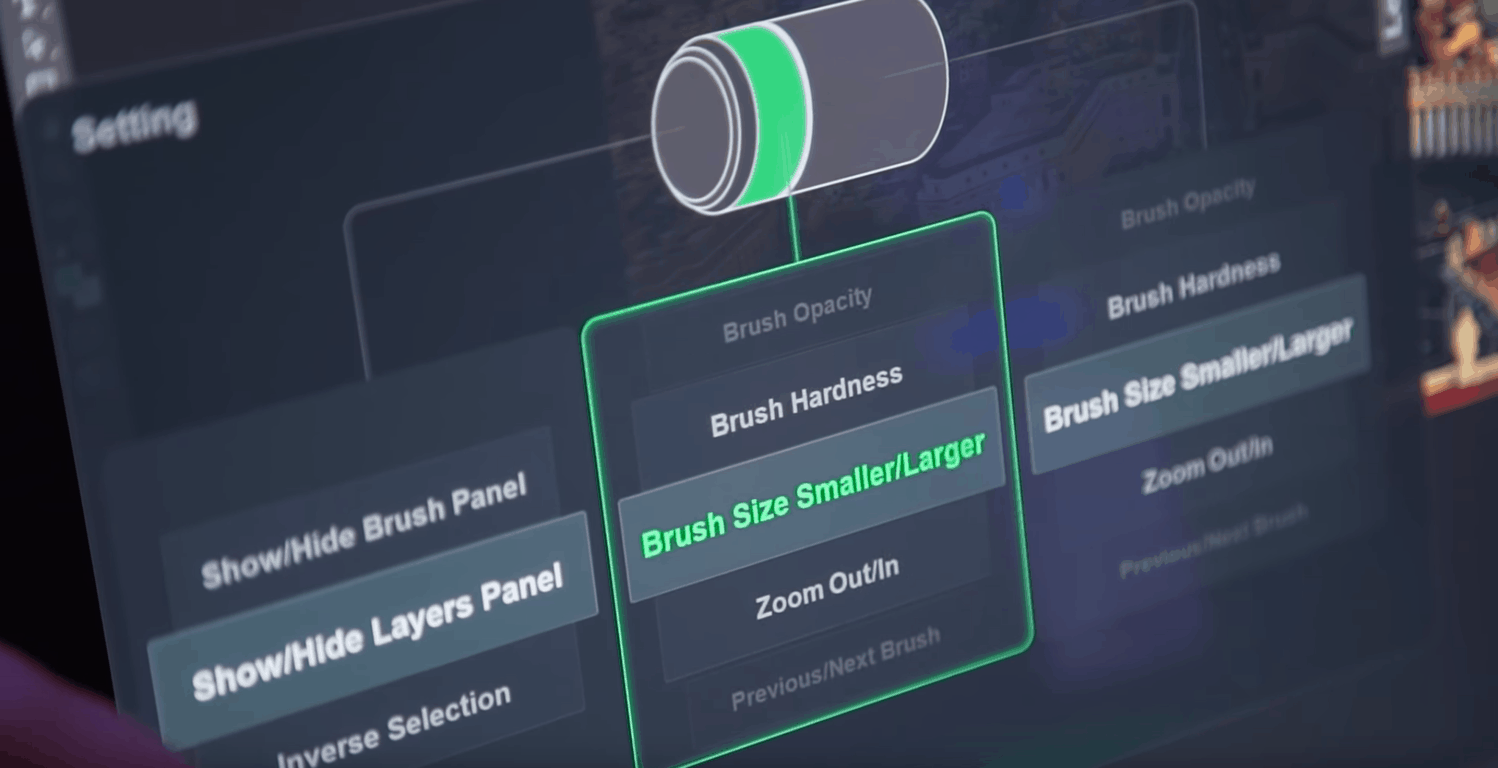 The dial can be attached on either side of the screen via a dedicated USB port and comes with nifty LED that can be tagged to specific software use. There are only a handful of applications that work with the LED on the Precision Dial, but Lenovo plans to offer more in the coming months. Other Precision dial features include volume adjust, zoom, display brightness and in-app sensitivity controls such as color, hue, and saturation as well as pen density and shading.

As mentioned, Lenovo packs a wired/wireless keyboard and mouse in the box which works adequately or well depending on your familiarity with Lenovo's U-shaped chicklet buttons. On laptops, I enjoy a good Lenovo keyboard and button design but for desktop, I found myself often replacing the Lenovo sanctioned hardware with my designer Microsoft keyboard and mouse for speed and accuracy. Either way, both options fit neatly on the base and under the screen when I was in creative screen mode (I don't think that's a thing, but I'd like to start it as one.) 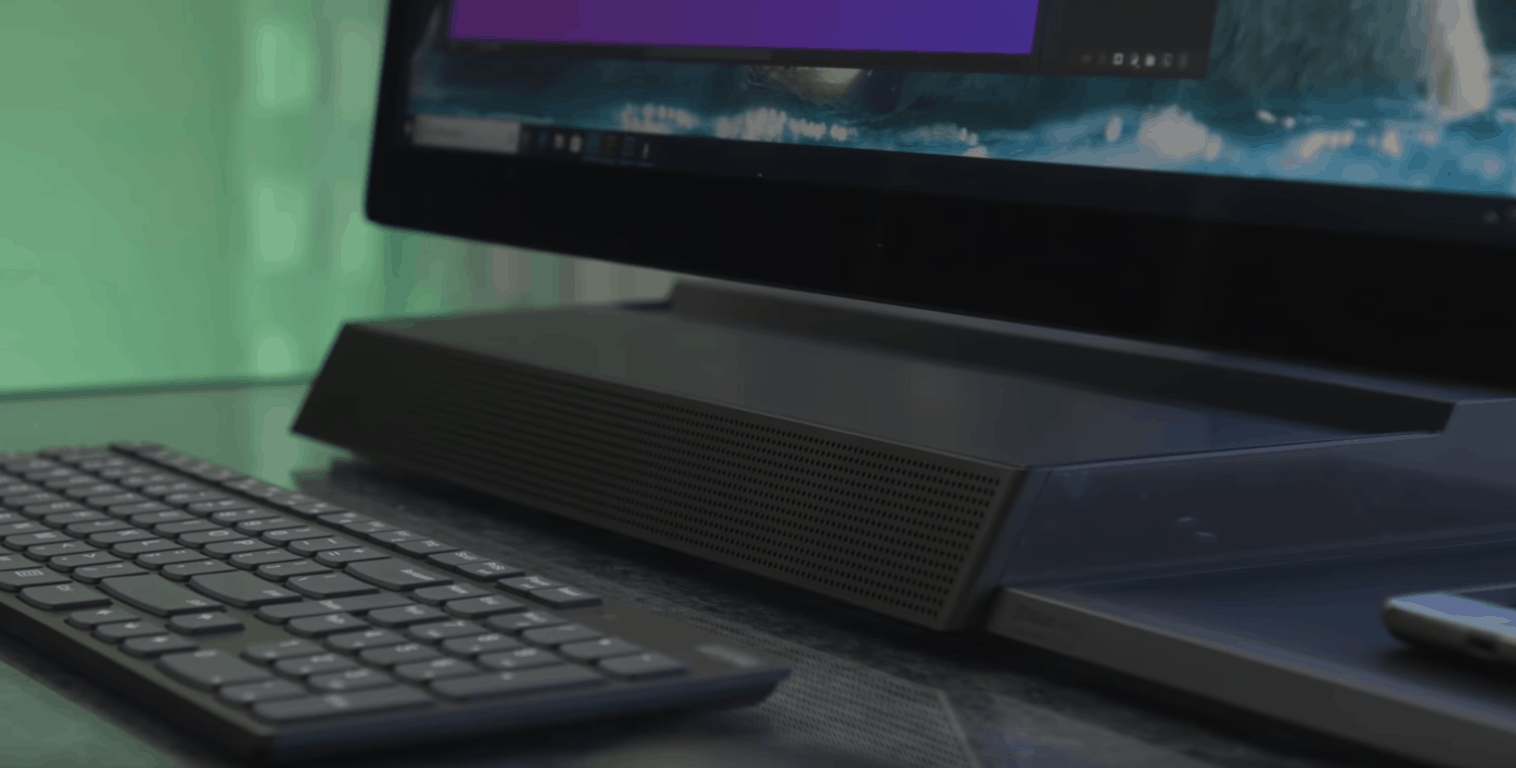 From a purely aesthetic design point of view, I prefer the Surface Studio's more minimalist approach but Lenovo's functional consideration will probably win over most consumers.

The screen of the A940 is slightly thicker width-wise than the  Surface Studio and iMac (at its edges) and seems to also carry a larger bezel ratio than the Surface Studio.

At 27-inches and with a 4K UHD IPS Multi-touch display, the A940 holds its own against the Surface Studio's 28-inch PixelSense Display with 10 point multi-touch.

Both panels support pen input which drops the iMac out of contention. Lenovo has come a long way with its pen technology and now 4,096 levels of pressure sensitivity.

Unfortunately, the A940 does not rotate as low as the Surface Studio but thanks to its side-mounted Precision Dial, it doesn't have to. The articulating hinge is slightly thicker on the A940 which should give users a bit of comfort when handling the device on move from one desktop to another.

Although, I'm not sure how often people will be moving the 32 lb device with much of the weight in the base of the device.

The base of the device is where Lenovo steals the race and shines a light on the ingenuity of its hardware team.

Unlike the base of the iMac or Surface Studio, the A940's base is the width of the computer matching its 27-inch screen counterpoint and is packed with a clear and robust Dolby Atmos speaker/soundbar system as well as sections carved out for storage a standard size keyboard, mouse, and even wireless smartphones.

The A940 matches wits with an iMac and Surface Studio well on a myriad of fronts.

Perhaps, Lenovo could have sprung for a better graphics experience by implementing the latest NVIDIA GPU or pay some attention to its relatively subpar webcam but overall, the package feels more thought out than the either of its competitors.

Including a wireless keyboard, mouse, pen and creative content assisting tool in the box for a price a thousand dollars cheaper than either of its competitors could be the revival of the All-in-One for the market.