AdDuplex published today its latest Windows Devices Statistics Report for the month of February 2017, giving us fresh new data about the health of the Windows 10 ecosystem. The cross-promotion network for Windows Phone and Windows Store apps and games didn’t publish any report last month, so it’s interesting to see what’s changed since last December.

As usual, the report is based on data collected from around 5,000 Windows apps running the AdDuplex SDK v.2 and higher. This time, the company took a closer look at Windows 10 PC manufacturers, PC screen resolutions, Surface popularity and more, but as usual we’ll start with the current state of Windows Phone.

Looking at Windows 10 Mobile devices worldwide, the most significant change was the Lumia 650 moving from fifth to second rank over the past two months with a 12.3% market share. “Overall, newer devices are slowly climbing up the chart while older devices are sliding down, as expected,” added the company. Please note that all handsets from third-party manufacturers are buried in the “Other” category, which means that the HP Elite x3 or the Alcatel Idol 4S have yet to get real traction. 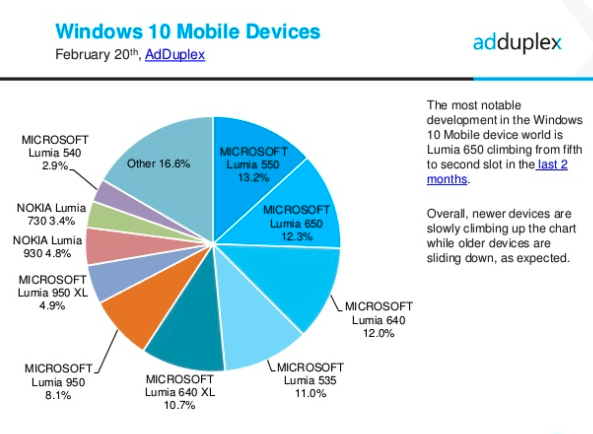 First of all, the Windows 10 Anniversary Update has continued to gain ground since last December: six months after its global rollout, it’s now running on 90.3% of all Windows 10 PCs worldwide. 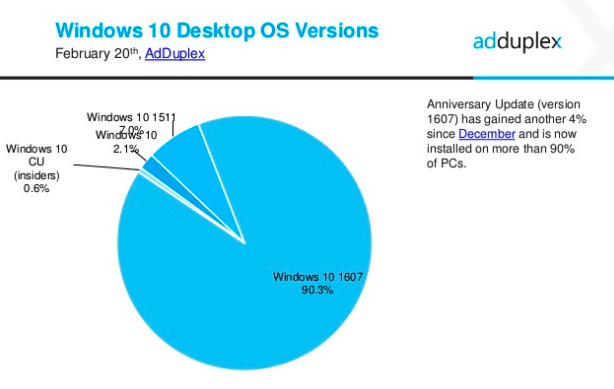 AdDuplex saw minor changes in the top 10 Windows 10 PC manufacturers, with MSI and Medion entering the chart at #9 and #10, respectively. HP remains the most popular manufacturer with a 23.8% market share, followed by Dell (13.8%) and Lenovo (12%). 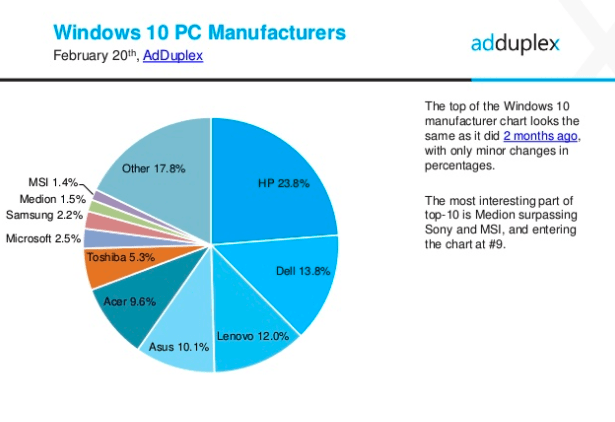 According to the company, 1366 x 768 is the most popular PC screen resolution, being found on 33.3% of all Windows 10 PCs. Only 27% of Windows 10 PCs have a full HD screen or higher, and it would be interesting to know the (presumably low) proportion of 4K screens in the market. 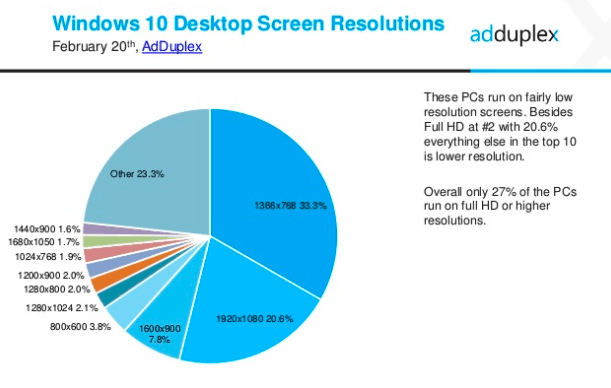 Lastly, if you were wondering what were the most popular Surface devices in the market, the Surface Pro 4 and its older Surface sibling are the clear winner with a 40.4% and 26.7% market share, respectively. Below the 10% mark, it appears that the Surface Book is still a niche device (6.3%), though the “ultimate laptop” is still more popular than the just released Surface Studio all-in-one PC (0.1%). 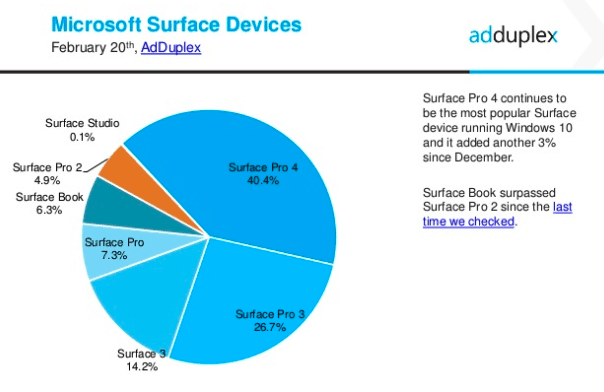 As we reported last week, it seems that a Surface Pro 5 is definitely in the works and we hope to see the new 2-in-1 device launch alongside the Windows 10 Creators Update in the spring. However, we don’t know yet if Microsoft is working on a Surface 4, though it could make sense for the company to launch a cheaper Surface model running Windows 10 on ARM or the recently discovered Windows 10 Cloud.

Anyway, with nothing much happening on the mobile side recently, it seems that future AdDuplex reports may increasingly focus on Windows 10 PCs going forward. PCs are clearly the most vibrant element of the Windows 10 ecosystem right now, and we would be fine with that.