Latest AdDuplex numbers show Surface Pro is off to a good start - OnMSFT.com Skip to content
We're hedging our bets! You can now follow OnMSFT.com on Mastadon or Tumblr!

Two weeks ago, Microsoft started shipping its new Surface Pro and Surface Laptop in 25 markets, and the new devices are already showing up in AdDuplex's latest Windows Device Statistics Report. The cross-promotion network for Windows Store apps and games also shared an update about the propagation of the Creators Update on Windows 10 devices, noting that the major update is progressing faster on Windows phones.

As usual, keep in mind that the AdDuplex's data comes from around 5,000 apps running the AdDuplex SDK, so the sample is not necessarily an accurate reflection of the Windows 10 ecosystem as it exists today. However, this is better than nothing as Microsoft rarely shares hard data about Windows 10 devices in the market these days.

AdDuplex introduced its latest report with some interesting stats about Surface devices: while the aging Surface Pro 4 continues to dominate Microsoft's Surface lineup, the Surface Laptop (0.4%) and new Surface Pro (2.2%) already appear in AdDuplex's sample. "Looks like familiar Surface Pro already has some edge over brand new Surface Laptop, but it is probably too early to make any conclusions," noted AdDuplex.

As for the propagation of the Windows 10 Creators Update on Surface devices, the company's sample shows that the Surface Book seems to be the most up-to-date model, while the Surface Pro 3 is curiously lagging behind. 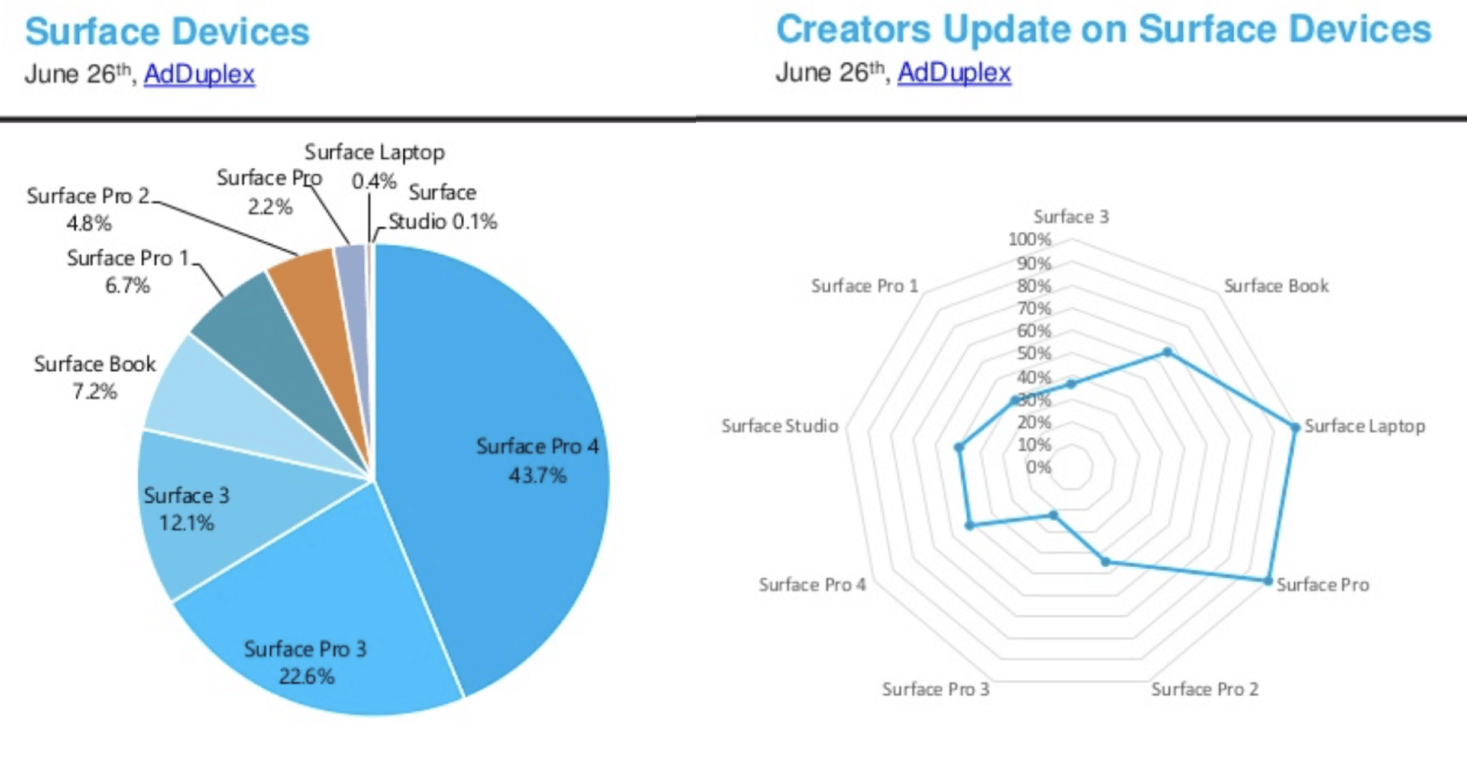 Moving on to Windows 10 OS versions, 35.7% of Windows 10 PCs from the sample are already running the Creators Update. AdDuplex noted that this progression "seems to be inline with how the Anniversary Update spread," and the company expects to see an infliction point next month when the latest major update should finally become the most popular Windows 10 version on the market. 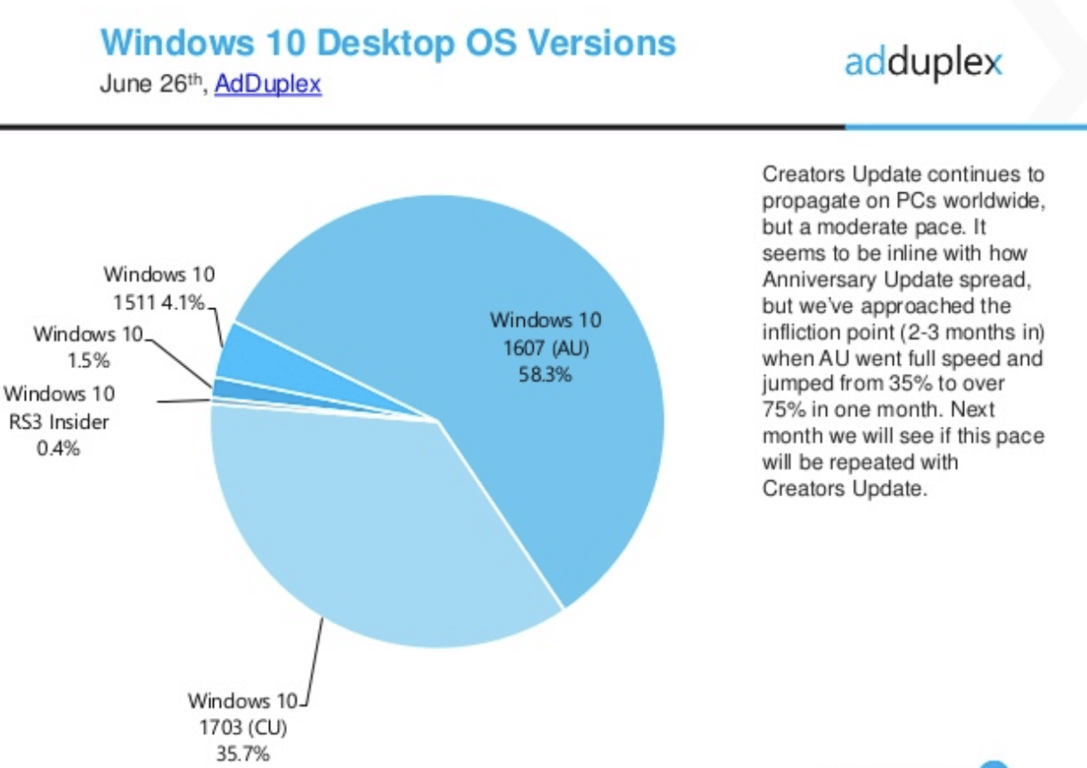 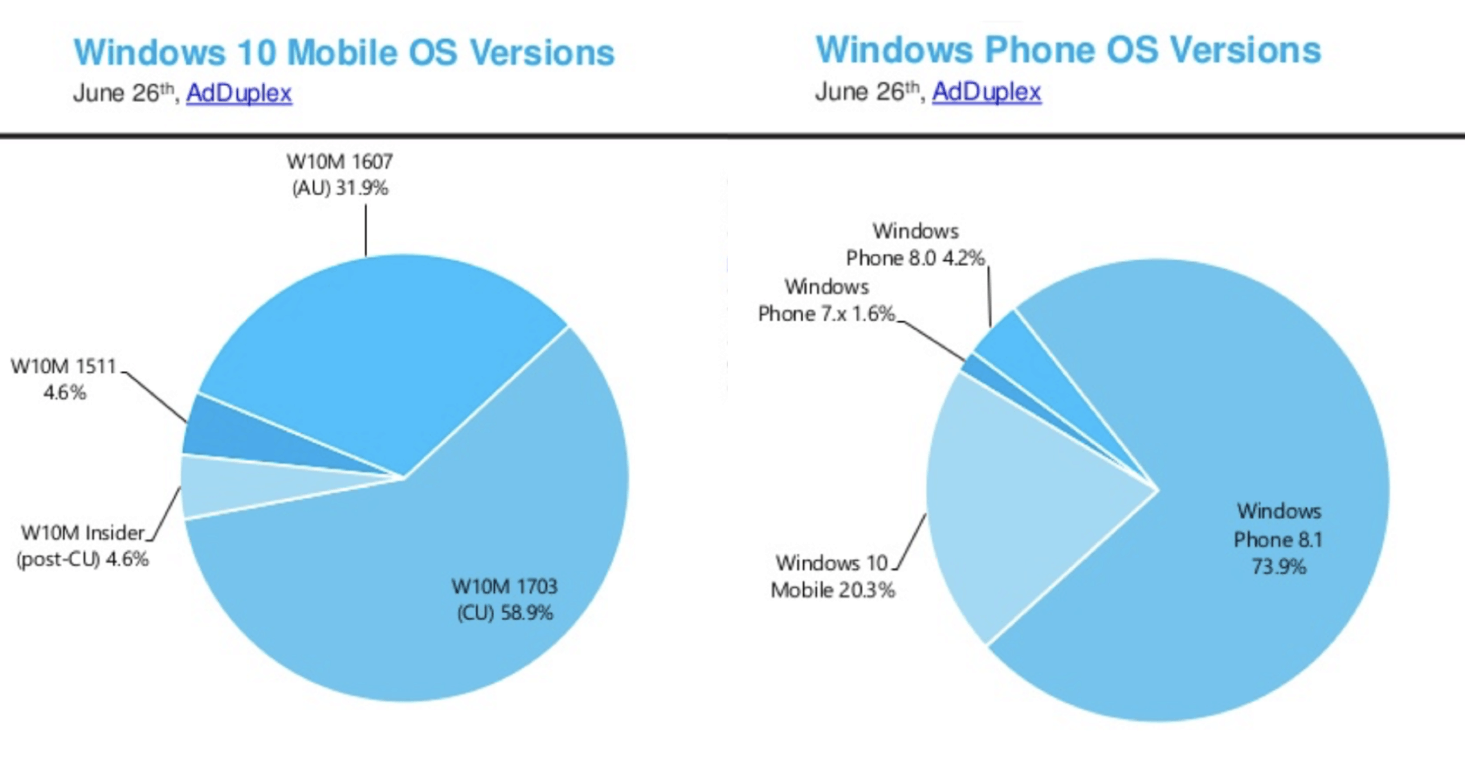 "With Facebook Messenger, and now Skype, abandoning WP8 it's not unlikely that this trend will accelerate as time goes on," added the company. That's a pretty pessimistic point of view, though there is likely some truth in it. As a reminder, Microsoft will end official support for Windows Phone 8.1 on July 11, and we expect more users (and developers) to abandon the platform going forward.