Microsoft and Apple have always been great frenemies, competing aggressively in some areas of computing and cooperating in others. Microsoft has for a long time offered a version of Office for Apple’s Mac platform, and Apple recently invited Microsoft on-stage to demonstrate Office Mobile for the iPad Pro. The two companies have become the best of friends and the worst of enemies.

In all such relationships, things are often said that are sometimes carefully crafted, others, sometimes off-the-cuff–and sometimes engineered to look like the latter when they’re really the former. The last couple of years have been particularly rancorous, however, as Microsoft has started to encroach on Apple’s turf by introducing hardware that directly competes with Apple’s core business. 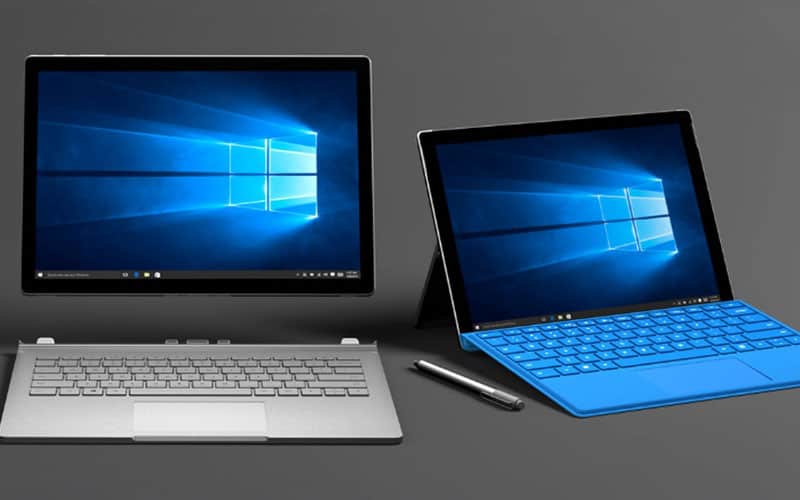 Apple CEO Tim Cook has had a couple of sharp comments about Microsoft’s Surface line of hybrids, that range from calling the strategy “diluted” in the sense of not being focused on one type of machine over another to comparing the Surface to a toaster-fridge that does nothing particularly well. That mythical creature even made an appearance at Microsoft October 6, 2015, hardware event where the Surface Book–an even more direct competitor to Apple’s MacBook line–was unveiled to much fanfare.

“Microsoft really wants you to only carry one device for tablet and PC use,” explains Laycock, speaking to us at the Consumer Electronics Show 2016 in Las Vegas. “Whereas the iPad Pro is always going to be a companion device.”

He adds: “The strategies are very different.”

“We don’t see it as a one-to-one comparison, because this is a full PC, you’re running full apps,” Laycock adds.

That’s fairly on-target if your goal is to point out how limited is Apple’s strategy when it comes to productivity devices. We’ve written before that comparing the iPad Pro to the Surface Pro 4 is a silly proposition–they’re very different devices that don’t really accomplish the same things.

The Surface/iPad Pro observation seems to be Laycock’s point that an iPad Pro is a productive device only up to a point, and it’s at that point that you need to hand off a task to a full PC like the Surface (or any other Windows 10 PC or Mac). Certainly, Office 2016 mobile is capable of productive work, but it’s a mere shadow of the full Office suite, and so an iPad Pro is necessarily limited in terms of creating the kinds of complex documents that are used in today’s organizations.

Calling an iPad Pro a “companion device,” then, makes sense for anyone whose productivity needs go beyond light editing of documents, photos, and video–not to mention all of the other functionality that a full OS and universal peripheral support provides. That’s likely quite a few people, particularly in Microsoft’s core target market of business professionals and the enterprise.

Laycock also pointed out the utility of the Surface Pen, in another oblique dig against Apple’s messaging:

“At one point in time, Apple declared that if there’s a stylus, that’s failure,” continues Laycock. “We’re a huge believer in the pen; we know our customers love it.”

The Communications lead goes on: “So to see Apple do something that feels a little bit similar, that is clearly skewed for a bigger screen, and more productivity built in, and the ability to use a pen.”

That’s a refreshing statement for all of those people who once used Microsoft’s visionary (but defunct) Tablet PC platform and recognized active pen–not capacitive stylus–as a powerful tool for note-taking, drawing, and other tasks requiring precise input. We’re glad someone made this point, even if it is someone so personally invested as Laycock.

As always, it’s fun to watch two technology giants duke it out on the public stage. But we’d be remiss if we failed to acknowledge that Microsoft makes some valid points here. The company has implemented some very intelligent strategic moves, from pushing the solutions cross-platform to investing heavily in the cloud. Another is creating the Surface line to highlight the benefits of Windows 10, which is already bearing some fruit as OEMs continue to produce their own ‘innovative’ products to join Microsoft’s own profitable hybrids.

We’ll continue to keep out eye out for more competitive banter, so keep tuned. We’re guessing 2016 is going to be a fun ride for Microsoft fans.

Who threw the craziest party at CES? Microsoft, of course