An Intel exec has apparently leaked the company’s new Thunderbolt 5 technology by mistake. Gregory Bryant, EVP and GM of Intel’s Client Computing Group posted a couple of pictures of his trip at Intel’s R&D facilities in Israel yesterday, and he posted then deleted a picture that included some details about Intel’s upcoming Thunderbolt 5 protocol.

Day 1 with the @intel Israel team in the books. Great views…incredible opp to see @GetThunderbolt innovation …a validation lab tour and time with the team…can’t wait to see what tomorrow brings! pic.twitter.com/GKOddA6TNi

The deleted picture was saved and explained by the experts AnandTech, and you can see it below. It’s a bit blurry, but you can see a ‘80G PHY Technology’ at the top of the poster on the wall, which according to AnandTech refers to a physical layer (PHY) for 80 Gbps connections. Intel’s Thunderbolt 4 and Thunderbolt 3 protocols is currently capped at 40Gbps, so Thunderbolt 5 will apparently offer twice the bandwidth. 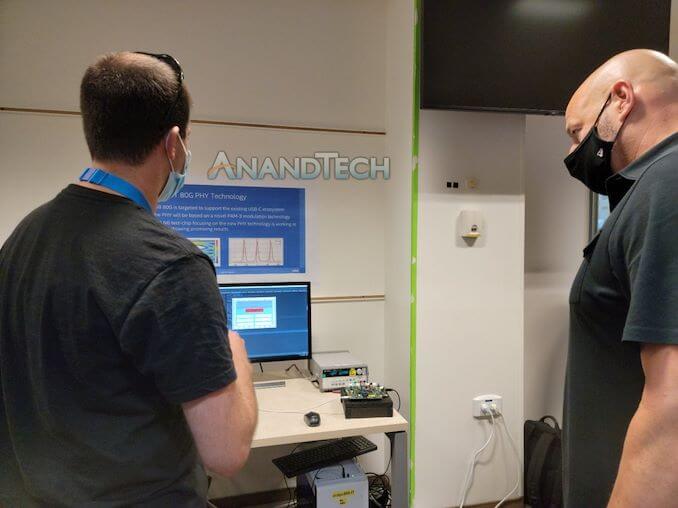 The second line on the poster mentions that “‘USB 80G is targeted to support the existing USB-C ecosystem,” which is good news for consumers. Versions 1 and 2 of Thunderbolt used the same connector as Mini DisplayPort, but Thunderbolt 3 and 4 have been using USB-C ports exclusively.

Right now, the USB-C ports you find on PCs may or may not support Thunderbolt 3 and 4 to offer more power and bandwidth than standard USB-C connections, but some PC manufacturers like Microsoft have chosen to completely ignore Thunderbolt on Surface devices. Intel’s Thunderbolt protocol evolves independently from USB standards, though the recent USB4 specification used Intel’s Thunderbolt 3 as its base after Intel made the spec royalty-free in 2019.

The coexistence of different Thunderbolt and USB versions is certainly is a source of confusion for consumers, and according to what Surface inventor Panos Panay said a couple of years ago, the complexity is one of the reasons why Microsoft has been reluctant to embrace Thunderbolt on Surface devices. The upcoming Thunderbolt 5 will likely add some complexity to the PC ecosystem, though it could be some time before Intel is ready to officially announce it.