It seems that Microsoft’s Surface Hub has opened up a new avenue of competition for the company, as another company begins to expand on the original design. InFocus is releasing their own upgraded version of the collaboration screen declaring the new product with a 70″ 4K resolution screen as Mondopad Ultra.

Targeted for businesses and corporations, the whiteboard screen works almost identical to the Surface Hub. Using the touch screen, users are able to write notes, perform presentations, and hold video conferences on the large device.

Neowin’s article lists the key specs of the 70″ version of the Mondopad Ultra:

It is obvious that InFocus wants to one up the Surface team with its 4K resolution and even bigger screens than before. The Mondopad Ultra will have three different sizes: 70 inches, 80 inches, and 85 inches. The promotional PDF shows exactly how InFocus originally marketed the Mondopad in comparison to the Surface Hub. 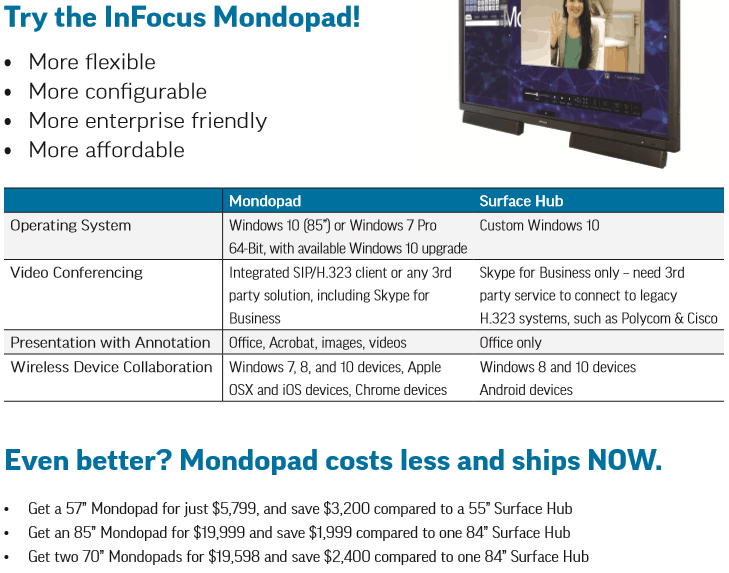 With obvious swipes at the Surface Hub’s mess of a release, it will be interesting to see if Mondopad Ultra can put its money where its display is. After only a few months, Microsoft had already sold 500 Surface Hubs which was more than what they were expecting. We’ll see how the $13,999 price tag measures up next month when it releases.

Until then, what do you think? Will the Mondopad Ultra be able to exceed the sales that Microsoft managed? Or will it fall flat due to first come, first serve with corporations already invested in the Surface Hub? We want to hear your opinion in the comments below!