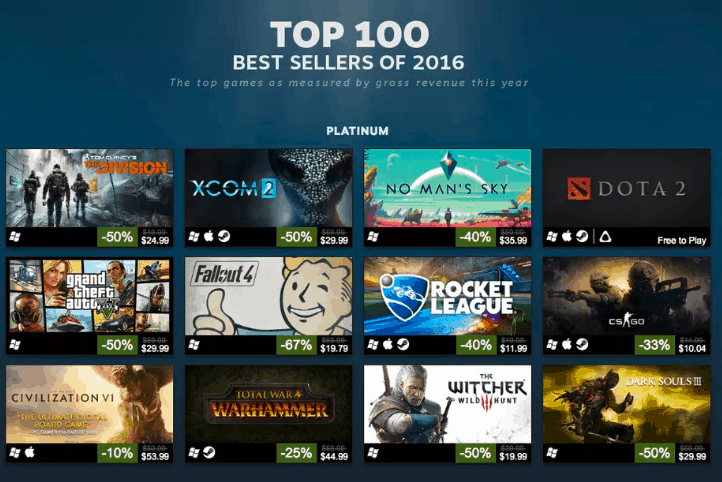 While Steam’s Winter sale is coming to a close this morning, the digital retailer has just announced its 100 best selling games of 2016 (via Polygon). Instead of sharing revenue details for each game though, the company only split these 100 games into four different tiers (platinum, gold, silver and bronze) and in random order, so we don’t know what was this year’s best-selling either.

It’s worth noting that some of these games such as CS:GO and Dota 2 are already pretty old. The second one is also a free-to-play game with some lucrative in-game purchases, apparently. As for No Man’s Sky, it looks like its disastrous release in June didn’t affect sales that much, even though we’re still seeing a majority of negative reviews on the store listing as of today.

Most of Steam’s 100 best selling games are still being discounted during the company’s Winter Sale which ends in less than 2 hours at 11 AM PST. Hurry up if you want to take advantage of up to 80% savings on all of these games.

Start off 2017 with four new Games with Gold free titles including World of Van Helsing, The Cave