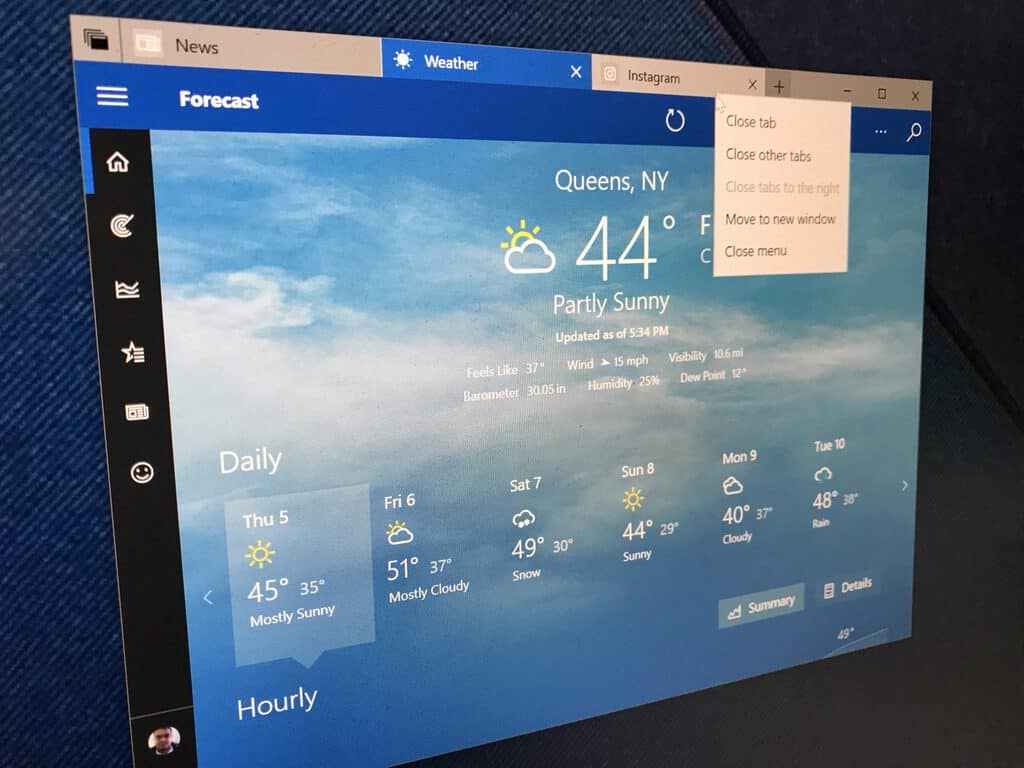 Just last week, I wrote about how Sets in Windows 10 could become an excellent time-saving multi-tasking feature. Though I found that Sets improved my workflow (and put everything I usually worked on front and center,) I also noted a few areas where Microsoft could improve the experience. Well, with the recent release of Skip Ahead build 17639, Microsoft did just that. So, here's a hands-on with the new and improved Sets.

With this latest build, Microsoft has finally made it possible to drag and drop tabs within and between Sets windows. Though a simple feature, it is useful for when you have two instances of Sets open side by side, and when you want to switch a tabbed app from one side of the screen to the other. The feature works as it sounds, and you just need to click on a tab to drag it around the Set. Unfortunately, though, you still can't drag and drop Microsoft Edge within Sets. The experience is also quite buggy, and sometimes an app will disappear when dragging out, as the Twitter app did here.

Anyone who uses Edge is familiar with the context menu which pops up when you right-click on a tab. Well, Microsoft now added this feature to Sets to help you leverage your options when having multiple tabs open at once. You can now close tabs, close other tabs, close tabs to the right, or move a tab to the new window with a simple right-click on any open tab. Pretty nifty, and time-saving right?

In my previous piece, I complained that I was not able to properly restore previous Set tabs that I had open. Well, Microsoft has finally improved the restore feature. It now works as intended, and you can pick and choose which previous tabs you want to restore, instead of just restoring all tabs. This also comes as a change over the previous version, where you only could have restored tabs when the primary window was a document. Microsoft even added a nice animation to show you when there are no previous tabs available to be restored.

The tabbed File explorer is pretty cool, and with the latest version of Sets, it gets even easier to use. No longer do you have to press control when in the new tab page in order to launch a File Explorer window in a new tab. Now, pressing on CRTL+T whenever File Explorer is in focus will open a new File Explorer tab. This will automatically open the same instance of what you were working on before! It is pretty cool, especially since Microsoft also added a new UI to the File menu in file explorer, showing an option to open in a new tab or new window, and a new "open in new tab" option when right-clicking on folders.

Switching to Tabs in Sets with Alt+Tab

Switching between Tabs in Sets is now even easier in this build. You no longer have to depend on the previously announced shortcuts to move between your open tabs without a mouse. Now, you can switch between Tabs with just ALT+TAB, if you've enabled the feature in settings.

Finally, Microsoft updated the Settings for Sets so that it now is searchable via Cortana and Windows Search. Sets now has a settings page where you can change the Alt+Tab behavior to use the classic Alt+Tab to switch between Windows only, or Sets tabs only. This will be appreciated for those who turn Sets off, or want to use the classic keyboard controls for moving between Sets.

Though the above changes are the most significant, Microsoft also made some minor changes to the Sets experience based on user feedback. The company fixed an issue where the active tab color wouldn't be visible until you hovered over it, and also made changes so the transition between tabs much quicker. Other fixes include reliability enhancements for restoring tabs, and a fix for the issue where closing a tab in a Set and then opening a new tab might unexpectedly maximize the tab.

At the end of the day, these improvements are very much appreciated. Sets still has a long way to go, and there are many things which Microsoft is still working on, including enabling Sets for more Win32 apps, and for Office. With Redstone 4 development almost done, it is highly likely that Sets will get more attention soon, but for now, it will have to do. Keep using Sets, and keep the feedback coming to Microsoft, as it only helps makke the feature better for everyone else.