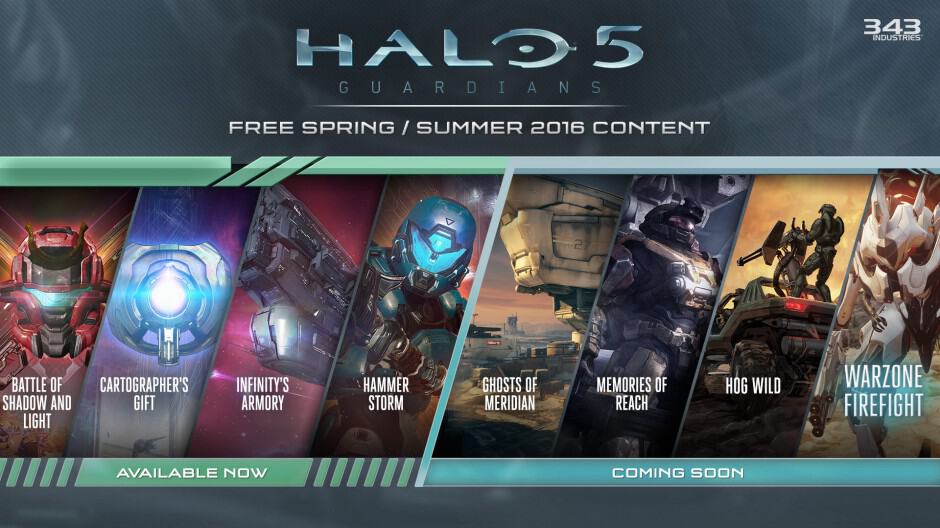 Halo 5: Guardian's developer 343 Industries has just announced that the Hammer Storm update for the Xbox One exclusive game is now available to download. Sticking with their promise to bring monthly new content to Halo fans, the developer is bringing back the Griffball mode as we told you yesterday as well as a lot of new content making this update "the most extensive post-launch content plan for a Halo game ever".

Like previous free content releases, the Hammer Storm update will automatically be installed when you launch the game on your Xbox One, and here are the most important highlights:

If that seems a lot of new content to enjoy, 343 Industries is not done with fan service as the developer is also teasing us today with "“Warzone Firefight”, an upcoming PvE mode that will let Halo 5 players battle together against common foes. This new game mode will be released in the coming months along with other goodies ("Ghosts of Meridian", "Memories of Reach" and "Hog Wild") that the developer still has to reveal. But 343 Industries want to reassure fans that it continue to listen to players feedback:

"We’ll continue to listen to all of the valuable feedback provided by you, and will use it to help inform the addition of new content, refine the gameplay, and address issues or concerns raised by our incredible community.

It's great to see Halo 5 receiving this kind of support (the developer is counting 11 new maps, 12 new modes and more than 180 new REQ items, all for free), and we think the Xbox One exclusive is still one of the best multiplayer shooter games of this current consoles generation. We can't wait to get our hands on this Hammer Storm update, please tell us in the comments if you share our excitement!