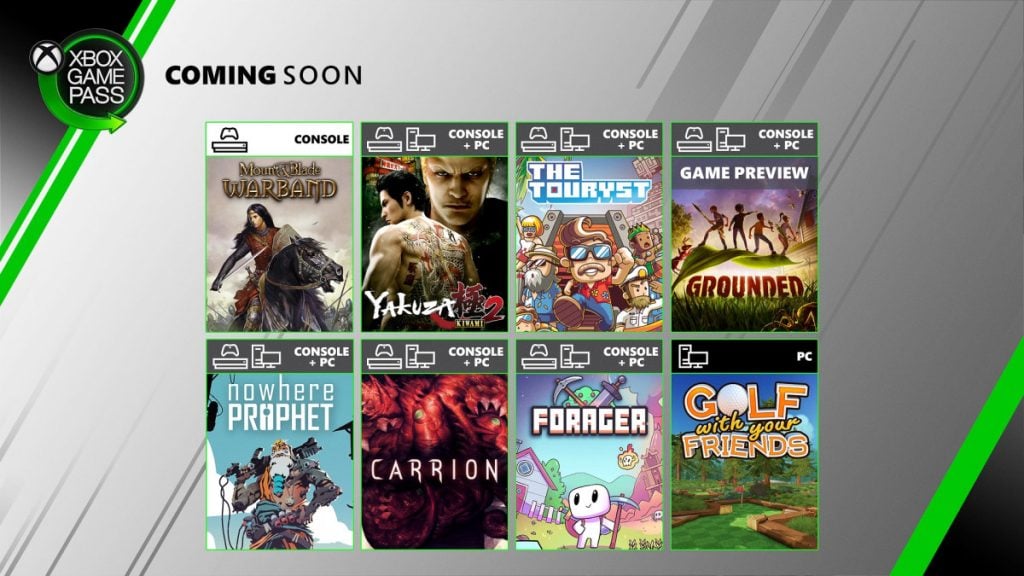 Microsoft has just announced eight new games coming to Xbox Game Pass this month, with six of them to be available on both Xbox One consoles and Windows 10 PCs. Two new games will be available starting tomorrow, July 16, with the 2D open-world game Forager and the strategy sandbox title Mount & Blade: Warband (Console only).

Two more games will follow next week on July 23: The horror game Carrion, along with the PC version of Golf with your Friends (already available on Xbox Game Pass for Console). Grounded, the new survival adventure from Obsidian Entertainment will also launch in preview on Console and PC on July 28, and the game is already available for pre-download on both platforms.

Last but not least, Xbox Game Pass subscribers will get three more games on July 30 with the adventure puzzle game The Touryst, the card game Nowhere Prophet, along with Yakuza Kiwami 2 (the first game is already available on Xbox Game Pass for PC and Console).

In case you missed it, Halo 3 has just launched on Xbox Game Pass for PC yesterday, and we hope that Halo 3: ODST and Halo 4 will soon complete Halo: MCC on PC. Two new unannounced games have also joined the Xbox Game Pass catalog this month, including the roguelite action-platformer Neon Abyss, and the turn-based strategy game Endless Space 2 (PC only).

That's it for July, but August should be another exciting month for Xbox Game Pass subscribers. The much-anticipated Microsoft Flight Simulator game will be available on PC on August 18, and it's already available for pre-download through the new Xbox beta app for Windows 10. A closed beta will also be available on July 30.