A Google Play Services issue appears to be nuking Surface Duo devices (with workaround) - OnMSFT.com Skip to content
We're hedging our bets! You can now follow OnMSFT.com on Mastadon or Tumblr! 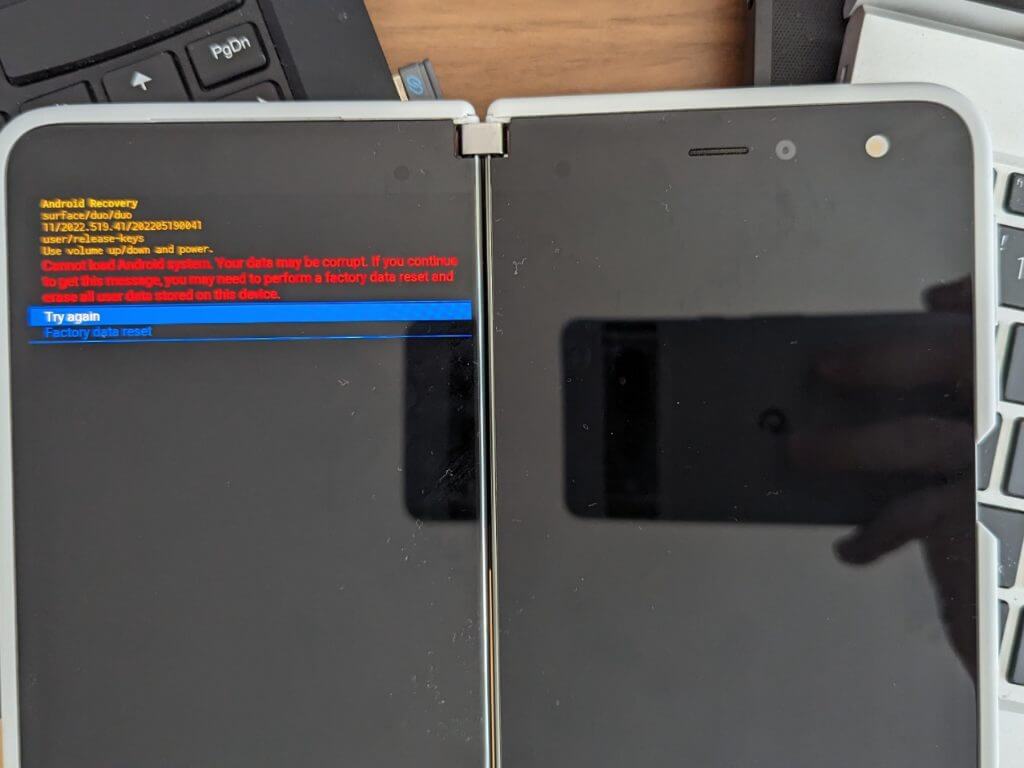 While the Android 12L Update for Surface Duo owners has gotten its fair share of coverage regarding the touch-and-go nature of the release, some handset owners have been quietly fighting a seemingly separate battle involving a Factory Reset loop that makes the smartphone practically inoperable.

For many, the Factory Reset Loop issue has occurred devoid of the Android 12L update and appears to be common among mostly, if not entirely, original Surface Duo owners.

The occurrence of this new issue with Surface Duo owners is bubbling into more than an isolated incited among a one or two owners and has spawned a couple of dedicated Reddit threads with the following anecdotal scenarios.

I just got my SD1 last weekend and have been using it all week. This happened to me yesterday- after 5 days of use. I wasn't actively using it at the time, but it was charging and I had a timer going. I picked it up to find it in the recovery factory reset mode. I tried to reboot without wiping, but would get to the home screen and it would force me back to recovery with nothing changing until I finally gave in and factory reset it. Very annoying for sure. I'm thankful I hadn't loaded it up with everything yet, just a few apps. I came here to see if it was something known already. When I didnt find anything I was hopeful it was a one time thing. Now, you have me worried. I really, really, want to like this device. There is so much I do enjoy with it and since I got it for much less than it was I'm willing to stomach it not being a perfect experience, but still- I expected more. -/BHSaint

Others in u/EastLansing-Minibike's Reddit thread chimed in with similar experiences that involve a working Surface Duo randomly tossed into a Factory Reset Loop.

When visiting related official Surface Duo support pages, there is little in the way of advice, workarounds, solutions, or even explanations offered to owners, however, in the same Reddit thread, there have been theories bandied about that point the finger at a Google Play Serivces issues.

While neither Microsoft nor Google have officially addressed the issue yet, Redditor /jhk0528 seems to have pinpointed a very plausible reason Surface Duo devices have randomly begun needing a Factory Reset.

I found out this was happening due to an Android feature called the "Rescue Party" that tries to detect repeated crash events and suggest a factory reset as the last resort to recover from a potential boot reboot loop. See --

- The system_server restarts more than 5 times in 5 minutes.

- A persistent system app crashes more than 5 times in 30 seconds.

In my case it was the 2nd bullet, where com.qualcomm.location kept crashing. I was able to gather this from adb logcat. That all said, I still don't know how to get around this issue 🙁

It seems the issue has little to do with Android 12L and more to do with two Android protective services clashing with one another due to a bug that's crashing Play Services particular to Surface Duos.

Fortunately, there is a workaround suggested to get devices out of the loop and back up and running relatively untouched by the Rescue Party feature.

Found the culprit for com.qualcomm.location crashing. For whatever reason it was having issues with the latest installed com.google.android.gms (Google Play Services). After uninstalling the update and reverting back to the stock version (adb uninstall com.google.android.gms), I'm no longer seeing the forced factory reset trigger happen. I'm unsure yet what sort of incompatibility the older stock version might have, but so far I'm able to use all Google apps normally.

I turned off Auto-update apps from the Play Store just in case this problem comes back. Who knows, maybe taking the 12L update eventually will fix this permanently on my device. Mine is an unlocked AT&T version.

Anecdotally, I experienced the issue over the weekend and have been speaking with Shane Craig over at ScaryifLiteral who has become somewhat of a community lead source for Surface Duo info, and we've managed to simply a solution that has worked for me, so far.

While it is not ideal, a Factory Reset has bought me the time needed to put in place some safeguards that have prevented the Factory Reset and should help me going forward if it does reappear.

For those looking to be a bit more thorough, you can do all the above and upload an APK mirror of an older Google Play Service build from here and do a process of elimination to identify which version may be causing the crash.

Again, there is no official word from either Microsoft or Google regarding the Factory Reset Loop for Surface Duo devices, and the above suggestions should be taken with caution.

However, if you're at your last resort for options, please try and let us know how your experience has gone. Hopefully, this Factory Reset Loop can be addressed by Android 12L if and when it hits original Surface Devices officially.

Microsoft starts rolling out the Microsoft 365 app for the web