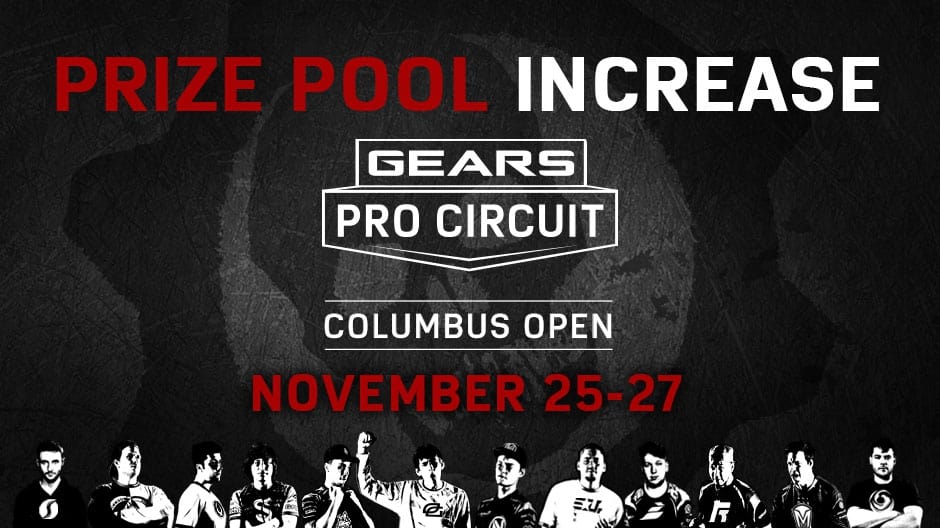 Xbox and The Coalition announced that the Gears Pro Circuit Gears of War eSports event is raising its prize pool offering to $300,000 (USD). Previously, the prize pool was valued at $250,000, but eSports upped the amount based off sales of Gears of War 4 eSports Supporter Packs and support from the eSports fan community.

The $300,000 is the largest prize pool offered in Gears franchise history to date. Here is the new prize breakdown for the top 16 finishers:

This is the first ever Open LAN event for the Gears Pro Circuit and will take place November 25-27 at the Greater Columbus Convention Center in Columbus, Ohio. Future Gears Pro Circuit live events will be scheduled in cities such as Paris, London, Mexico City, and Las Vegas. The Columbus Open still has general admission ($35), VIP ($150) and competitive team ($200) passes available for purchase through the Major League Gaming (MLG) Store.

The Gears Pro Circuit Columbus Open starts at 5 PM ET on Friday, November 25 and you can view it here. Special prizes will be available for those who tune in, including an Xbox One S Gears of War 4 Limited Edition Bundle. In the meantime, don't forget to check out Xbox One's Gears of War 4 (and other Microsoft Store products) Black Friday deals.

Hot deals: Windows 10 laptops and desktops from Dell, and more

Despite paying $26B for LinkedIn, Microsoft plans to be handsoff according to CEO Satya Nadella