Fujitsu is launching a 6-inch Windows 10 tablet in Japan 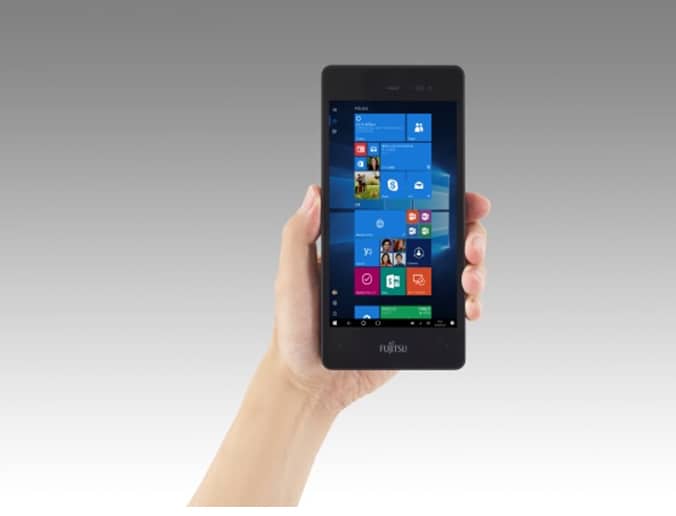 Japanese manufacturer Fujitsu has announced today a new PC lineup for the Japanese market including business laptops, desktop PCs as well as a handheld Windows 10 tablets with a 6-inch screen (via Techradar). It’s quite unusual to see a manufacturer using a phablet form factor for a Windows 10 tablet, but it also seems to go against Microsoft’s official minimum hardware requirements for Windows 10: as of today, Microsoft indicates that Windows 10 is designed for devices with a 7-inch screen or greater.

Fujitsu’s first handheld tablet is the ARROWS Tab V567/P which weighs just 280g and is 85mm wide, with the company claiming that the design is “roughly the same as a personal organizer, preventing fatigue even with lengthy operations.” While the handheld tablet runs Windows 10 Pro, Fujitsu didn’t provide any details about the specs for now. At 147,300 JPY ($1,303), it also seems quite expensive.

Like we said, Windows 10 isn’t designed to run on small tablets, unlike Windows 10 Mobile which has been designed for phones and tablets with screens smaller than 9-inches. Is Windows 10 really usable on such a small screen? Well, we assume that the Japanese manufacturer did extensive testing to make sure that hit targets are not too small for the average consumer, though we guess than adjusting text scaling may be a good idea.

The ARROWS Tab V567/P tablet should be available in mid-January in Japan (we didn’t find a store listing on Fujitsu’s website yet), with three more expensive models (up to 198,900 JPY, or $1,759) to be released between early February and March. Let us know in the comments if you think this handheld tablet an interesting addition to the Windows 10 ecosystem.