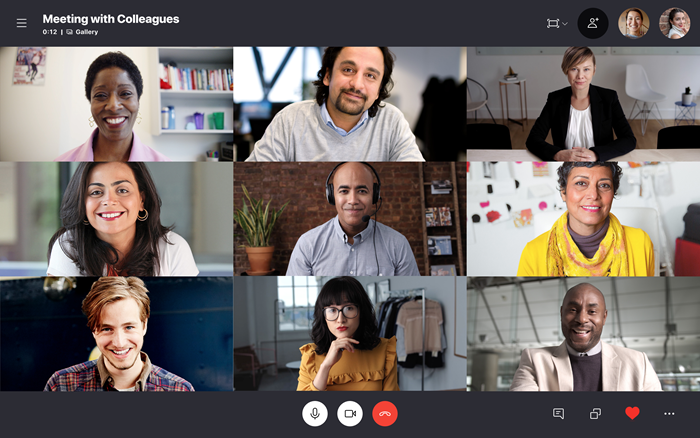 Microsoft is rolling out a new 3×3 video view for Skype video calls, and desktop users can now see the video feed of nine participants on their screens at a time (via Windows Central). This feature was first introduced in Microsoft Teams, and the 3×3 grid of video feeds is now exclusively available on Skype for Windows, Mac, and Linux. To turn the feature on during the meeting, click the Switch View button and select either 3×3 Grid view, Grid view or Speaker view from the menu.

In addition, Microsoft has also released support for moderated groups in this update. This particular feature has been requested by the education community since the beginning of the COVID-19 crisis. Teachers can now create moderated groups for Skype video calls where only select users can be defined as administrators to start video calls. Here’s how you can create a Moderated Group to control the flow of conversation in a classroom:

Note: Any groups previously created with assigned roles (Admins/Users) have transitioned to Moderated Groups. In Moderated Groups, only Admins can start calls, including starting calls via the /golive chat command.

It should be kept in mind that when you create a new group, you are the Moderator/Admin by default and other members of that group are titled as Users or Members. If needed, you can use the available Skype chat commands to promote Users to the Admin role (so that they can start group calls), remove a participant from the group, and more.

Some other handy features included in this release are some new keyboard hotkeys for performing certain actions when the Skype window is minimized. There is also the ability to customize the list of message reactions, which would now appear in your preferred order. Finally, some usual fixes and stability improvements are also packed in this build. According to the official support page, Skype version 8.60 started rolling out on May 18, 2020, but the changelog was published this week. We invite you to check the official changelog for more details.