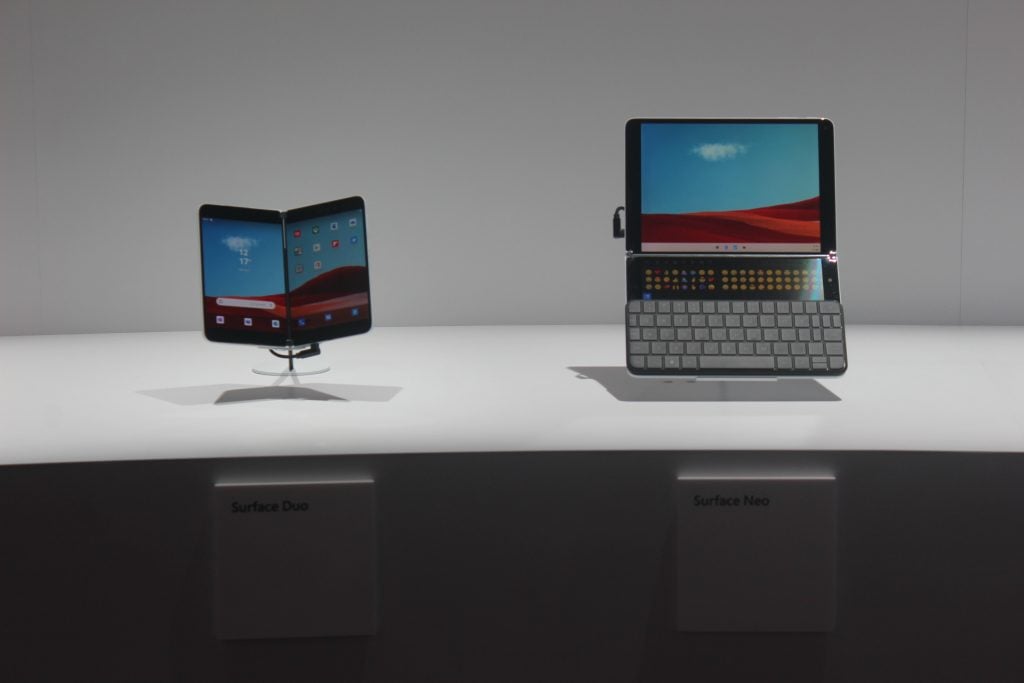 Microsoft pulled back some more of the covers on Windows 10X, Surface Neo and Surface Duo today during its online Microsoft Developer Day, with CVP for Windows Developer Platform Kevin Gallo hosting the festivities. While it's still too early to fully digest all that was announced, here are some first reactions.

The most glaring issue coming out of today's event was the multiple times both Neo and Duo failed during demos. At one point, Gallo was showing off a simple "move Google Maps into both screens" task, but it froze up the Duo he was live-demoing on. Luckily, he had another Duo in his back pocket, but after just a minute or so, that device locked up too.

Now Microsoft is to be commended for getting these devices out in the open early, and having demos fail this early in the process is probably just par for the course. However, it's still not a good look for what isn't much more than some UI controls running on top of Android, in the case of the Duo. With Surface Neo, which also failed in demos, the brand new Windows 10X may have a bit more of an excuse, but these failures show that if nothing else, these devices are no where near ready for release.

Perhaps the most important news coming out of the event today involves Windows 10X and the revelation that Win32 apps will run on Windows 10X in containers, separate from the operating system. The new system will work similar to, and is actually based on the work Microsoft has done to get Linux to run on Windows via the WSL2 Windows Subsystem for Linux:

Running all apps, not only UWP apps but Win32 apps as well in containers means that not only do the apps run more securely, unable to write to the core operating system, but also makes it possible to streamline that core OS. Windows 10X will be able to update "in as little as 90 seconds," and will significantly improve battery life.

Running in a container has a number of advantages, but some legacy Windows apps will have trouble running in this new system. Over the years, developers have pushed to get their apps to run as fast as possible, and to cut a corner here and there to get the most out of their applications. So, not every Win32 app will work on Windows 10X, but most will. Each of the three types of containers handled by Windows 10X (Win32, MSIX, or UWP) has their own advantages, as developer Ginny Caughey points out (click through to check out the thread):

Microsoft has a long history of supporting existing apps. pic.twitter.com/dm7dH2Vkuu

Microsoft continues to insist Windows 10X is for dual screens only... why?

Faster, safer, quicker to update, and with most or all of the legacy crap removed. Those are features that are appealing to consumers whether they use dual screens or not, yet Microsoft continues to insist on locking down Windows 10X to dual screen devices. We get that Microsoft really wants dual screen devices to succeed, and to lead in the next generation of computing, but there are a number of downsides to dual screens, too (cumbersome, bulky, expensive, unproven, etc., etc.), and we continue wait for the other shoe to drop. So far, Microsoft is sticking to its dual screen guns, but we can't see any reason why Windows 10X couldn't run on a single screen tablet, other than having to go head to head with the iPad. There may be technical reasons why Windows 10X only works on as-yet unreleased devices, but we doubt there's a technical reason why these devices need dual screens.

Dual screen devices for Microsoft are the smoke and mirrors to let it develop 10x, or specifically win32 app containers in broad daylight.

Windows 10x is the future, not foldables.

We're not too worried about the buggy performances, it is early, and we're glad that Microsoft is willing to suffer a few embarrassments in the cause of openness. We still have to hear how real world apps work in Win32 containers, or if developers will have to do a lot of work to get their legacy, but important apps to run (hint, they won't). And we're going to continue to hold out hope for a Windows 10X future beyond dual screens. Again, it's early.

What do you think about Windows 10X, Surface Neo, and Surface Duo? Let us know in the comments below.