Final Fantasy VII, Darksiders: Genesis and more are coming to Xbox Game Pass in August - OnMSFT.com Skip to content
We're hedging our bets! You can now follow OnMSFT.com on Mastadon or Tumblr! 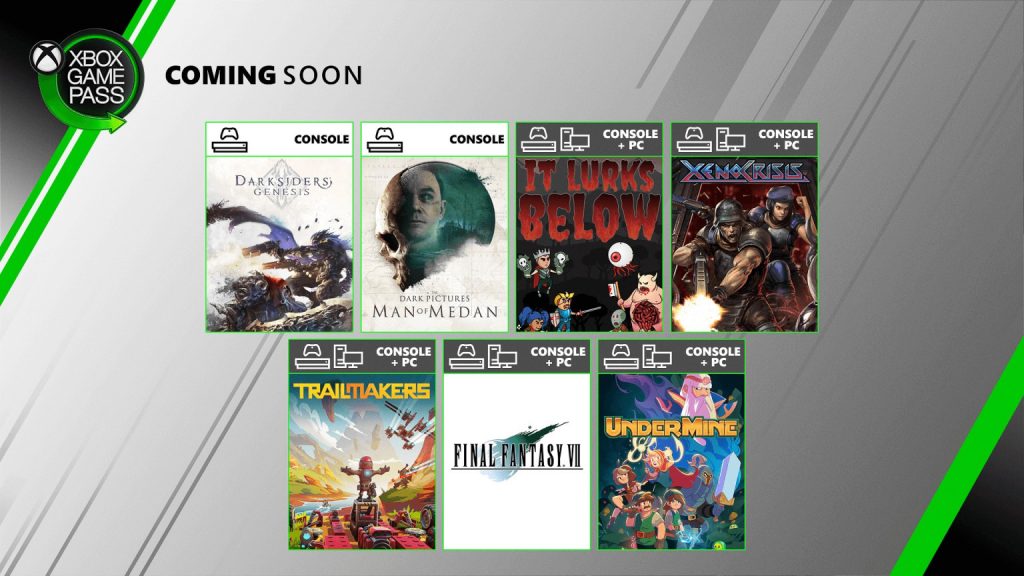 Microsoft has just revealed the latest games that will join Xbox Game Pass for Console and PC in August. No less than six games will be available starting tomorrow, starting with Darksiders: Genesis and The Dark Pictures Anthology: Man of Medan on Console. In addition, It Lurks Below, Trailmakers, UnderMine, and Xeno Crisis will all be available on both PC and Console tomorrow.

A last game will join the Console and PC catalogs next week on August 13, and it’s a true classic: Final Fantasy VII, one the best J-RPG of all times that got the remake treatment on PlayStation 4 earlier this year is coming to Xbox Game Pass, and it will join other episodes such as Final Fantasy IX and Final Fantasy XV. The Xbox One version of the game was released in March of last year, and it’s not clear yet if the PC version will support cloud saves and Xbox Play Anywhere, as Final Fantasy IX does.

Overall, this is a solid update for Xbox Game Pass in August, and if you haven’t played Final Fantasy VII yet, you should absolutely give it a try. If the PlayStation 4 remake received critical acclaim earlier this year, this game and recent Final Fantasy episodes have never really managed to recapture the magic of the original PlayStation game released back in 1997.

How to set up a Microsoft Teams meeting in Outlook