Halloween is almost upon us, which means that the month is coming to an end. That also means that it's time to turn back the clock and look at everything new in Teams for October. From a new Whiteboard experience, to live Transcript in unscheduled meetings, ‘Standout’ in PowerPoint Live, and more, we have you covered with a look at all the new features added this month in Teams.

When it comes to meetings in Teams, there were a few new features added this month. The first of those is the new Whiteboard experience. This new experience brings 40+ new customizable templates, the ability to insert images and shapes, and 8 new reactions while using Whiteboard in Teams meetings. Oher meeting features added to Teams this month can be seen below.

In addition to these features, Microsoft also added Live Transcript for unscheduled and Channel teams meetings. This makes it easier to see who is saying what during pop-up meetings. To use this feature, you have to have the Allow Transcription policy to on. 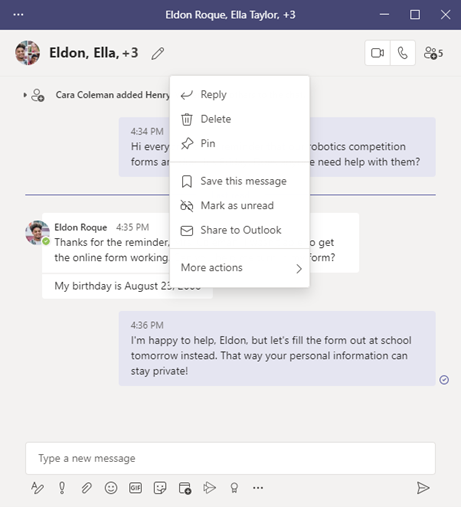 Chat is the core experience of Teams, and in October, Teams chat picked up new features for education users. At the top of that list is the ability for chat supervisors to delete messages. The feature is designed to remove inappropriate, off-topic, or other messages in a Teams chat.

Also falling in line with that is Suggested Replies in chats. For education users, there will be up to three recommended responses to choose from in the context of a chat. This functionality will be enabled by default for teachers and faculty and completely disabled for all students.

As expected, Microsoft did add some new calling features to Teams in October. At the top of the list is Better together for calls on Teams phones and displays. This allows Teams devices to seamlessly integrate with your PC for cross-device interaction and allowing you to answer a call, mute/unmute.

In addition, it became possible to use 1:1 calling in Safari on the web with Teams. To do this, you can head to the calls App or just the Call button in the header of a 1:1 chat. See below for some of the other calling news, related to devices.

Other features & other tenants

We hit the highlights for most features that people are likely to notice. But if you're using Teams for government or education, or are a Frontline worker, there are a bunch of new features for you, too. Check out Microsoft's full recap for more. And, see you again next month for another recap!

Microsoft Whiteboard gets new collaboration features on all platforms