Eve-devices recently unveiled its upcoming crowd-developed gaming monitor, Spectrum just a few weeks ago and now the company is looking to churn the hype cycle of its upcoming sequel to its flagship 2-in-1 tablet computer within in the same calendar year.

Earlier today, Eve-Devices teased visuals and suggested specs of its 2nd crowd developed 2-in-1 that follows its niche Eve-V competitor to Microsoft's Surface Pro from 2017.

The unnamed sequel project has already been making the rounds within the Eve Community feedback forums. Eve-Devices executives have asked members to help widdle down the number of reference design directions to five, that take into consideration lapability, weight, repairability, eGPU support, speaker placement, heat ventilation, and more. 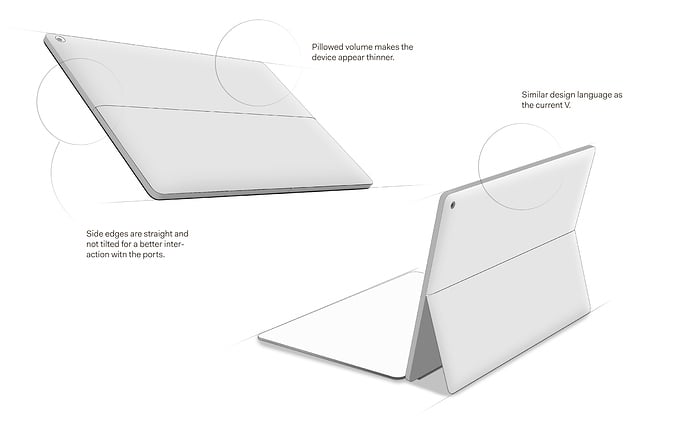 Other considerations being accounted for during this round of crowdsourced brainstorming for the untitled Eve V2 project also includes material options for the casing such as plastic, aluminum or metals to help with look-and-feel as well as functionality.

While the team is still collecting suggestions and thoughts, the leaked image from the company hints at a potentially similar design aesthetic as Google's Pixelbook Go with dual tactile arrangements that utilize partial ridges on the back panel in an effort to address heat sink using passive cooling design.

Eve-Devices has also hinted at some concrete hardware designs that appear to already be set in stone that include Thunderbolt 4 support and multiple USB-C ports.

Eve-Devices plans to have the Eve-V successor on shelves by the fourth quarter of 2020.

As the company flushes the shelves of its remaining Eve V devices and accessories, customers can snatch up one of the best Surface Pro competitor devices at a substantial discount from their online store.

If you have thoughts on a device supporting Thunderbolt eGPUs, speaker placement on handheld devices, hinges, kickstands, and physical switches, you may want to visit Eve forums while the company is brainstorming all ideas for the moment.

Currently, the Eve crowd is asking members to choose between Workhouse, Powerhouse House, One+One or Boosted Keyboard configurations for its potential 2020 offering.