E3 2018: Microsoft’s Xbox had the most popular conference, 77% of viewers male

Brandwatch has released their report on this year’s E3 which measures the popularity of each company’s conference and video game titles by studying social media reactions to events as they unfold. With the results in, one thing is clear; E3 2018 was a great time for Microsoft and Xbox One video games. 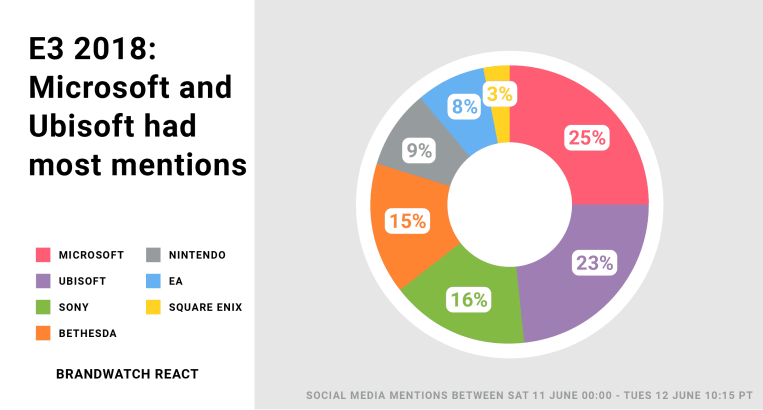 Out of all of the presentations at E3 this year, Microsoft’s Xbox conference was the most talked about with 25% of social media mentions, easily beating rival console makers Sony and Nintendo who received 16% and 9% respectively. Of particular note was Ubisoft’s conference which garnered 23% of social mentions, just 2% below Microsoft. Square Enix trailed far behind the others at only 3%.

E3 2018 was also a good year for video games coming to Microsoft’s family of Xbox One consoles. The top three most talked about games of E3, Fallout 76, Kingdom Hearts 3, and Cyberpunk 2077 will all launch on the Xbox One when they come out, though they will admittedly also arrive on Sony’s PlayStation as well.

Interestingly, the most mentioned game on social media from Microsoft’s conference was the Kingdom Hearts sequel (7.8K mentions) though overall talk of Xbox at E3 peaked when the Cyberpunk 2077 trailer aired. Halo: Infinite, which was teased at the beginning of the conference, was the second most talked about game with 4.4K mentions on Twitter. 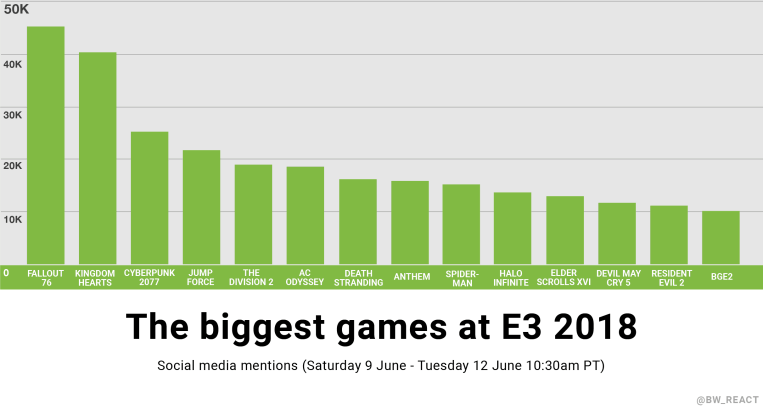 While gender diversity in tech and gaming has been a hot topic recently, this year’s E3, at least as far as social media interest is concerned, was overwhelmingly male with 77% of total E3 mentions coming from male accounts. Each conference hovered around the 80% mark when it came to male interest with Nintendo showing the highest appeal to female gamers with only 72% of mentions coming from male viewers.

Are you surprised by any of these stats? Did you expect certain titles or companies to rank higher or lower in popularity? Share your thoughts with the community in the comments below and don’t forget to follow us on Pinterest and Twitter for more Xbox One and video game news. Need to catch up on all of the big E3 2018 announcements? We’ve got you covered here.

Report: Google looks to a Windows 10 Certification for its Pixelbook