Due to “overwhelming public outcry,” iFixit tears down the Surface Dial 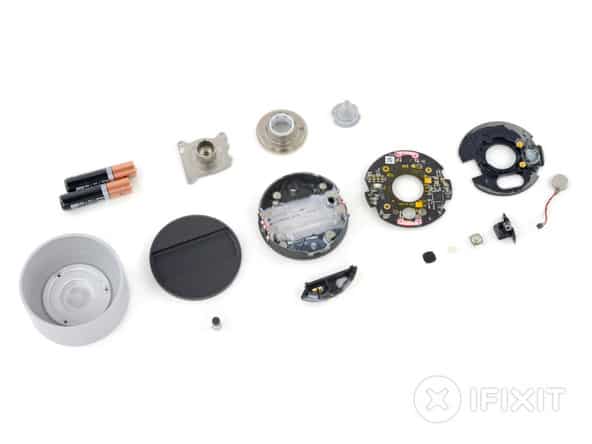 Announced earlier this year, Microsoft’s Surface Dial is a handheld haptic peripheral that can be placed on a Surface monitor to open up a new way to naturally interact with the device. With a rather simple design on the outside ran by two AAA batteries, popular repair site iFixit prepared their tweezers and screwdrivers ready to uncover what makes it spin.

The team was most impressed by the ability to switch out the batteries easily. The rubber footing is held on by magnets alone without screws or prying. Besides the batteries, there is a sync button that connects the peripheral to the Bluetooth.

While the iFixit team was taking the device apart, they didn’t realize there was a sticker inside the battery compartment. Behind the model number is a small hole. Whenever the device is turned just right, a screwdriver is all you need to start taking it apart. Similarly, the guts are able to be removed from the Surface Dial’s plastic casing. But that’s where things get a little messy.

To service the vibration motor, the microswitch that controls the clicking, or the optical sensor, iFixit had to pop the greasy bearing apart. Not an easy feat for most users without hurting the rest of the Surface Dial. After all of that hard work, the team revealed the 2.4GHz chip: Nordic Semiconductor nRF52832Bluetooth Low Energy SoC.

In the end, iFixit gave the Microsoft Surface Dial a rather low repairability score of four. In fact, they stated that the components most likely to fail are hard to replace without damaging the device.