Eurogamer’s Digital Foundry was able to unearth some initial benchmark specifications for Microsoft’s new Xbox One X. As noted on Reddit, Richard Leadbetter posted a YouTube video guide where he details Microsoft’s Xbox One X benchmarks, as well as discusses 4K scaling on 900p and 1080p Xbox One game titles and backward compatibility performance. 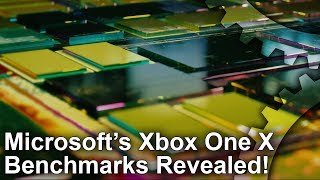 Eurogamer's Digital Foundry was able to unearth some initial benchmark specifications for Microsoft's new Xbox One X. As noted on Reddit, Richard Leadbetter posted a YouTube video guide where he details Microsoft's Xbox One X benchmarks, as well as discusses 4K scaling on 900p and 1080p Xbox One gam

Leadbetter noted that Cook gave a detailed look at Scorpio Engine GPU, with “detailed performance profiling.” Leadbetter explains that the numbers presented in his report were not provided by Microsoft, but instead, “we sourced them via developer contacts and we further verified them before publishing.”

While it is hard to know for sure how the Xbox One X will perform in real-life testing, Leadbetter found some great insight and a look at Microsoft’s advice to game developers.

“The fundamental architecture of the Xbox One X GPU is a confirmed match for the original machine with additional enhancements. There are other features, including AMD’s delta colour compression, which sees performance increases of seven to nine per cent in two titles Microsoft tested. DCC is actually a feature exclusive to the DX12 API. In fact, DX11 moves into ‘maintenance mode’ on Xbox One X, suggesting that Microsoft is keen for developers to move on. There are benefits for both Xboxes in doing so – and there may be implications here for the PC versions too. We could really use improved DX12 support on PC, after all.

Expect an easy port to Xbox One X with a baseline 4x resolution boost, start with your high-end PC settings, use the memory well and fill any extra frame-time with additional effects. Guard carefully against increased loading stalls and – yes – consider techniques like checkerboard rendering and dynamic resolution. We’ve certainly seen representation of the latter techniques already, but as we move closer to Gamescom and the run-up to the Xbox One X launch, these early benchmarks are fascinating – and how the scaling demonstrated here translates into final shipping software should be fascinating to track once we have hardware and games to test.”

We will have to wait until the Xbox One X release on November 7, 2017 to see whether or not Leadbetter’s benchmark findings are correct.