This one is going to be classified as very interesting. When Twitter users were doing searches on Twitter for the term 'Firefox' were being led to a 'Promoted Tweet' featuring Internet Explorer 9. Did Microsoft have something to do with this or was it merely a coincidence?

As ZDNet reports, searches on Twitter for the term 'Firefox' were pointing to a 'Promoted Tweet' featuring IE9. Since this is no longer the case on twitter, a screenshot was captured to forever remember this moment.

Apparently, this was spotted by none other than Mozilla's Tech Evangalist, Paul Roget, who tweeted and mentioned that Microsoft bought the 'firefox' keyword to promote IE9 on tiwtter and that Microsoft should stop being lame. 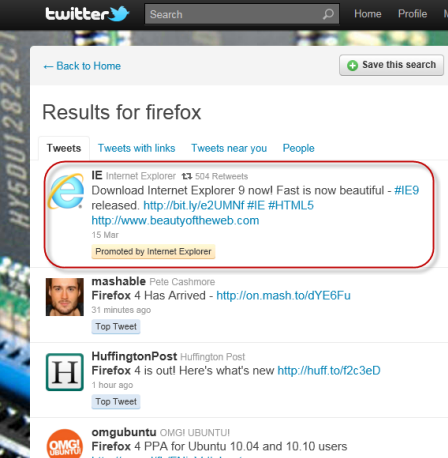 Do you think this was a covert tactic on Microsoft's part or a mere coincidence?