Despite not disappearing from store shelves quite as fast as its closest competitor, Microsoft’s Xbox One is still a fine choice for gaming and entertainment, and with a strong line-up of upcoming exclusives, as Microsoft is ever too keen on reminding us, you can’t go wrong with having one in your house in time for the upcoming holiday season. And what better time for a financially smart purchase, than on the upcoming Black Friday (only 37 days away) ? Just in time, since BestBlackFriday.com found a crazy-good doorbuster deal for the machine from the Dell Store for you. 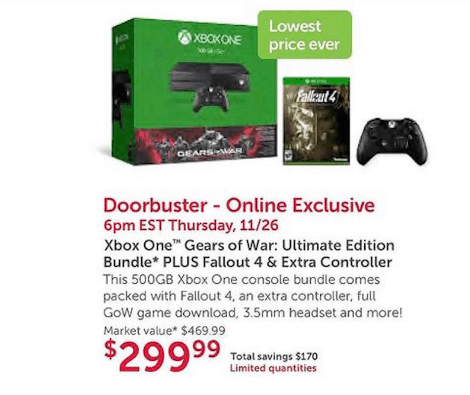 Specifically, from 6pm EST Thursday, November 26, the Xbox One Gears of War: Ultimate Bundle WITH Fallout 4 and an extra controller, will be available from the Dell Store for the freezing-cool price of $299. That’s a 500GB Xbox One with all bells and whistles with a game, plus a controller and an upcoming AAA title which should retail for no less than $60, for $50 less than the price you would normally pay for a normal, unadorned Xbox One. Heck, it’s even cheaper than that Gears of War: Ultimate Bundle we told you about (that one has a 1TB hardrive, but it’s easy enough to get your own.) If you’re in the market for an Xbox One, there’s absolutely no reason for you to pass this up.
Be sure to stay tuned for upcoming Xbox One news, deals and much more.