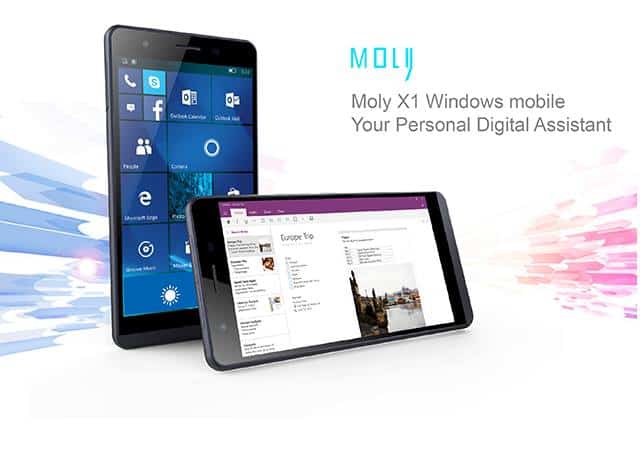 Chinese manufacturer Coship is one of the few Asian manufacturers along NuAns, Lenovo and VAIO that have introduced new Windows 10 Mobile handsets this year. One of these phones is the Moly X1, a 5.5-inch handset featuring a Snapdragon 410 SoC, 2 GB of RAM and 16GB of storage that is still available to purchase on Amazon as of today.

While the Moly X1 didn’t exactly set the Windows Phone crowd on fire, the company has published several posts on its Facebook page earlier this month to announce its plans to launch a new version on the Moly X1 "with a new build of Windows 10 making the phone working much better than before." (via Windows Central). Yesterday, the company shared more details by answering to comments on its Facebook page, adding that it would "rebuild the new Software and optimize the RF bands." Additionally, the manufacturer explained in another answer that it will launch the new handset through a crowdfunding campaign on Indiegogo later in October.

While we don't have much detail about this new handset for now, it remains to be seen if a crowdfunding campaign is a good go-to-market strategy. As a reminder, Japanese manufacturer NuAns also launched a crowdfunding campaign to release its NEO Windows 10 Mobile handset in the US back in July, but the company did not manage to get enough Windows Phone enthusiasts to make the campaign successful (though the company has since announce that it may give it another shot).

Windows phone definitely remains a difficult market for OEMs, and the much bigger Lenovo also announced earlier this week that it was no longer interested in Microsoft’s mobile OS, doubting Microsoft’s long-term support for the platform. However, as Microsoft's Lumia range appears to be on the exit it's now up to third-party manufacturers to keep the platform alive, even though it's still not clear how these OEMs could succeed where the Redmond giant obviously failed.