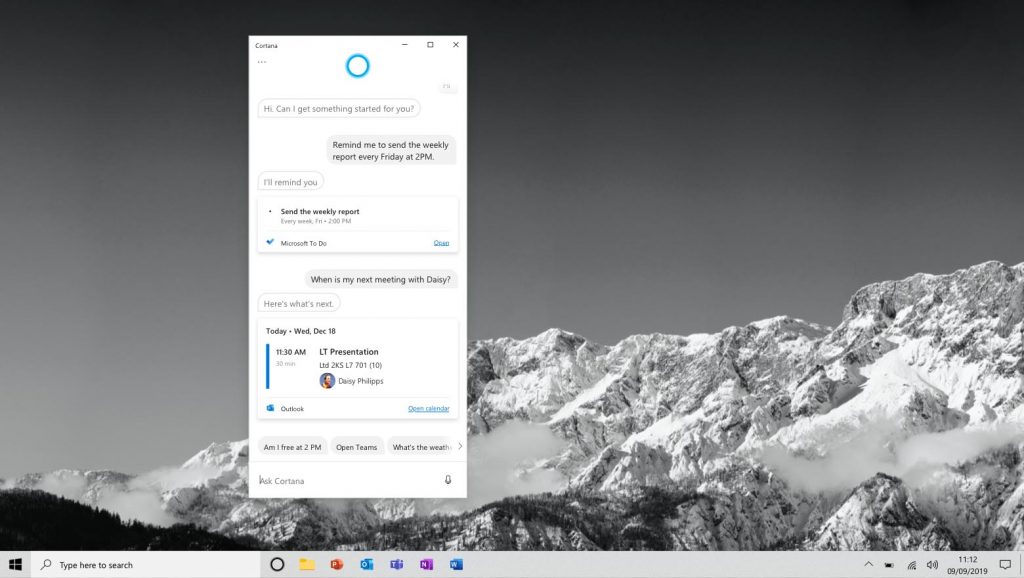 Microsoft has been using Windows Insiders to test a new standalone Cortana app for quite some time now. The new Cortana for Windows 10 has a new conversational UI and a draggable window, and it can now be updated more frequently through the Microsoft Store.

However, we’ve just learned that the digital assistant is about to lose some features in the next Windows 10 update. Andrew Shuman, CVP of Cortana at Microsoft, shared all the details about "the next step in Cortana’s evolution" on the Windows blog today.

"As part of Cortana’s evolution into a personal productivity assistant in Microsoft 365, you’ll see some changes in how Cortana works in the latest version of Windows 10. We’ve tightened access to Cortana so that you must be securely logged in with your work or school account or your Microsoft account before using Cortana, and some consumer skills including music, connected home and third-party skills will no longer be available in the updated Cortana experience in Windows 10,” explained Shuman.

We asked Microsoft if the Cortana/Alexa integration would still be supported, and the company confirmed that it’s still being worked on. "Microsoft is still working closely with Amazon to bring new and updated innovations to the integration between Cortana and Alexa,” a Microsoft spokesperson said. This is important as Amazon's Alexa currently has far more consumer skills than Cortana.

For those of you still using a Cortana-powered Harman Kardon Invoke speaker, Microsoft also told Mary Jo Foley from ZDNet that those speakers will continue to work, though users will need to switch to the Cortana app for iOS and Android to control them. Microsoft will also be ending support for Cortana on unsupported versions of Windows 10, Windows 10 Mobile, as well as the Microsoft Android Launcher in April.

Shuman did emphasize today that the updated Cortana experience would "help you achieve more with less effort.” For users in the US, Cortana will get new productivity features allowing users to find people or files, check or create emails, or add items to lists on Microsoft To-Do. The digital assistant will also still be able to provide answers from Bing, set alarms and timers, or tell jokes.

For users outside of the US, though, the updated Cortana experience will only provide the new conversational UI, in addition to Bing answers. "We plan to enhance our international experience with more productivity-based capabilities in the future,” Shuman said today.