Now that you’ve grown accustomed to having the Elytra glider on consoles, introduced in the Minecraft Ender Update 1.0 last December, Mojang and 4J Studios thinks you’re ready for the next step. How better to show off than with some new content?

Tomorrow, a free update will be rolling out for Minecraft on Xbox One and PS4 with Glide, a free minigame designed to test your gliding skills. Announced earlier today, Glide is described as a “beat the clock” Time Attack mode with updrafts, speed boosts, and rings to fly through for points.

Glide will support up to sixteen players, boosting up the max in the patch for other games as well and adding a ‘more spacious lobby’ for between game.But it looks like the maps for it will need to be quite large, seeing how the team could fly through their favorite Cavern Battle map in a matter of seconds. 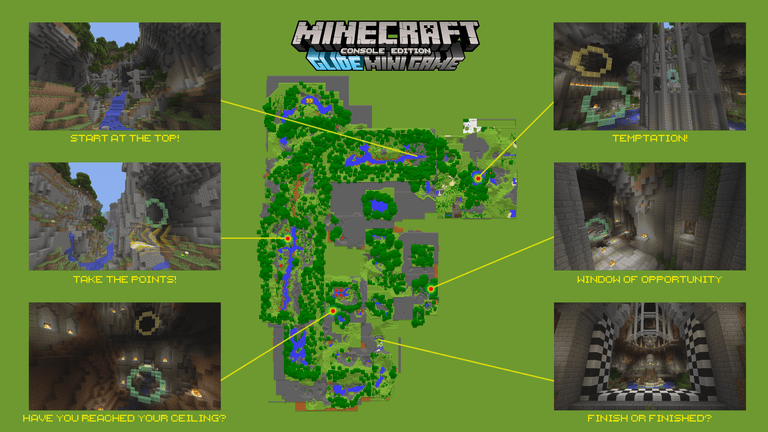 In the announcement post, Mojang also hosted a developer’s interview with 4J Studios about how the maps were created. It’s definitely worth a look to learn more about the background of Minecraft development. It’s also worth noting that more maps are planned for the future, both as free and DLC additions to the game including a large-scale dragon you’ll get to fly around!

“The first DLC pack going out will be themed around beasts,” says David. “We have a kraken-themed level which takes inspiration from Battle’s Cove map. You burst out into a huge open area with two battling ships and a giant, giant kraken that you fly right up and over. It’s a really great experience. Then we have an exciting glacial track that uses the Ice Spikes biome as inspiration. We have lots of yetis running through the map and giant fossils for you to avoid and to fly through. And the final one uses the Chinese Mythology pack – you’ll be flying alongside dragons and around the fantastic, epic terrain of China!”

Mojang is currently streaming a preview of the new minigame. If you miss it, there will be a replay available on Twitch.tv.