Check out this Windows Timeline demo from today's Windows Insider Webcast - OnMSFT.com Skip to content
We're hedging our bets! You can now follow OnMSFT.com on Mastadon or Tumblr! 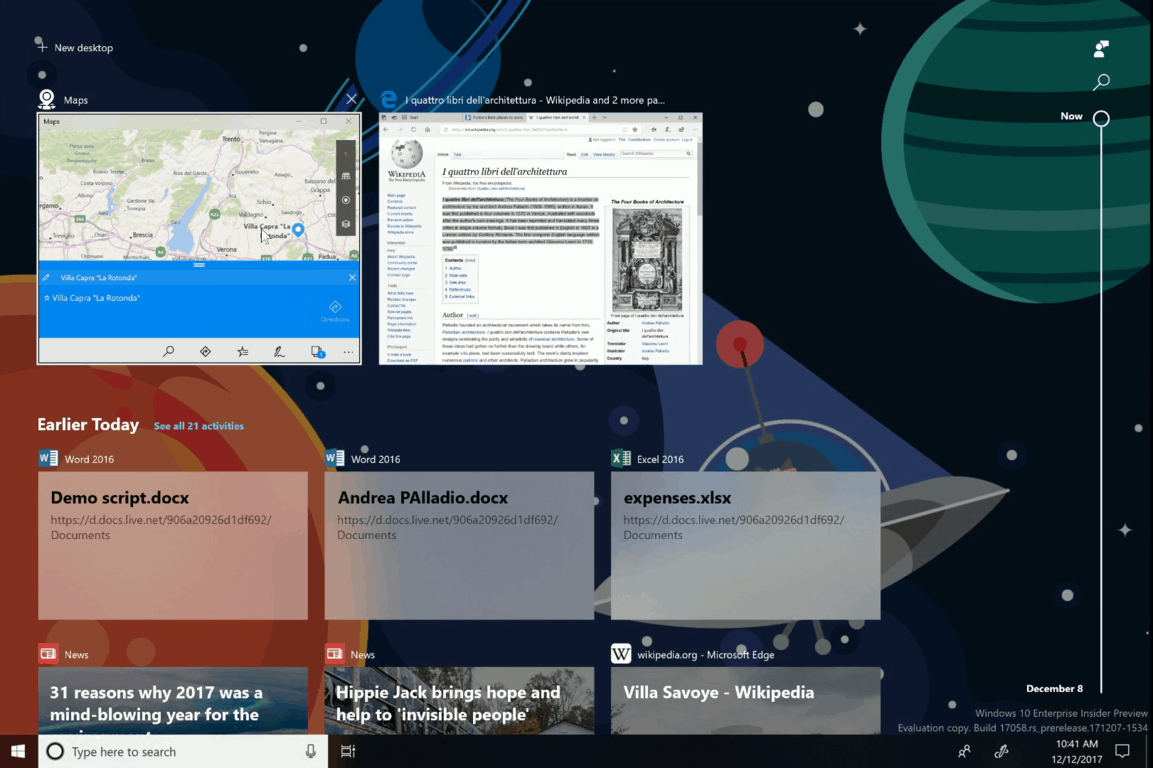 There won't be any new builds until Thursday at the earliest, but if you're eager to see the upcoming Windows Timeline feature in action, now is your chance. During today's Windows Insider webcast, the team gave a live demo of Windows Timeline and all of its features. Feel free to check it out on demand here (starting at the 17 minutes and 25-second mark.)

The demo gives a good look at the new Taskview icon, showing that the Taskview has not gone away, but is instead now showing directly above the Windows Timeline space. There's also a cool look at how items for each of the Timeline activities are organized across a total of 30 days (which is the time limit on all devices) via a main day view, and then by hours in a subview.

For developers, the Windows Insider team explained that they will need to update their apps for them to appear in Timeline. Microsoft apps including Edge, News, Sports, Weather, Money, and Maps have already been modified to work and will contribute activities to Windows Timeline across devices.

Activities from the Office apps (across platforms) are also included in Windows Timeline. Interestingly, the team explained if you have a file open scenario from File Explorer saved in Timeline, the application which does the opening will get a generic Activity card if the developer of the app has not yet opted to update their app for Windows Timeline.

To wrap up, the Windows Insider team provided a look at how to search for activities across days in Timeline. The team even said that there will be a link for developers to learn on how to get their apps working with Windows Timeline in the new blog post for an upcoming build.

The Q&A session from today's webcast revealed that you'll have full control of Windows Timeline. The data collection aspects of it can be turned off, with the option to remove which activities you do not want. Another question showed there's not currently an option to permanently exclude an app from Timeline, but Microsoft is working on it and would like your feedback.

Overall, this is definitely some very exciting stuff. We'll be looking forward to trying this out for ourselves, and remind you to stay tuned to OnMSFT for all your Windows 10 news and information. Dona Sarkar teased the blog post for the upcoming build is 25 pages long, so there definitely will be a lot to play with soon!