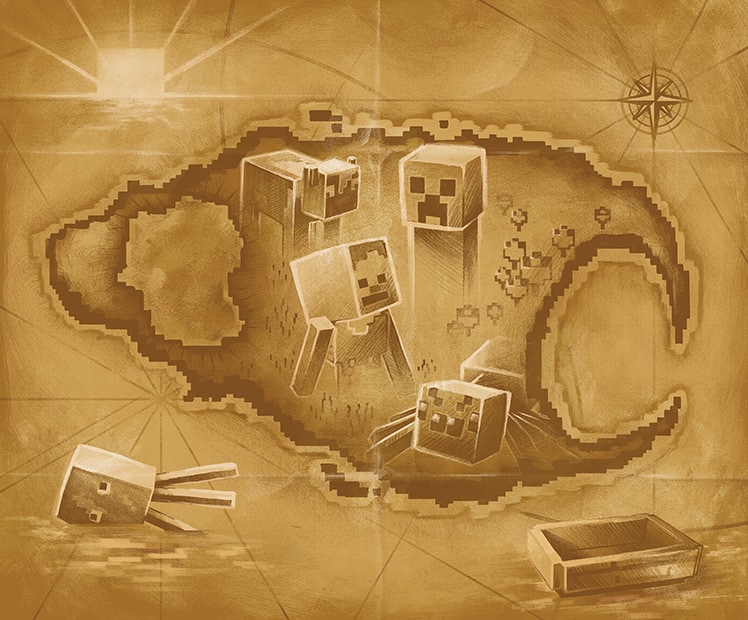 Nearly a year ago, Mojang announced that its very first official Minecraft novel was in the works. Today, Minecraft: The Island is launching in bookstores and can also be bought online.

Minecraft: The Island is a chapter book written by Max Brook, the author of popular zombie fiction World War Z. for ages 8-12 years (or grades 3-7) with 288 pages. The story follows a castaway on, you guessed it, an island and their attempt to survive in the world of Minecraft.

Washed up on a beach, the lone castaway looks around the shore. Where am I? Who am I? And why is everything made of blocks? But there isn’t much time to soak up the sun. It’s getting dark, and there’s a strange new world to explore!

The top priority is finding food. The next is not becoming food. Because there are others out there on the island . . . like the horde of zombies that appear after night falls. Crafting a way out of this mess is a challenge like no other. Who could build a home while running from exploding creepers, armed skeletons, and an unstoppable tide of hot lava? Especially with no help except for a few makeshift tools and sage advice from an unlikely friend: a cow.

In this world, the rules don’t always make sense, but courage and creativity go a long way. There are forests to explore, hidden underground tunnels to loot, and undead mobs to defeat. Only then will the secrets of the island be revealed.

Minecraft has been known as a subject of many community creations, books included. Many are on children’s reading lists, giving them a connection between one of their favorite games and increasing their reading level. But Minecraft: The Island is the first officially released book and if the announcement is any indication, there will be more to follow.

While currently, the official store page appears to be unavailable, you can now purchase the book from Amazon as digital or hardcover for $11.02. You can also read the first chapter over at Minecraft.net.