If Microsoft’s new Xbox Series X and Series S consoles won’t start shipping until November, the company has shipped some dummy units to a couple of publications this week such as GameSpot and The Verge. We’ve already seen both next-gen consoles side by side in video trailers and marketing images, but we now have pictures of the two consoles taken from all angles, as well as a side by side comparisons with the Xbox One X.

Microsoft has said that the Xbox Series S would be nearly 60% smaller than the Xbox Series X, and the console is indeed much more thinner as well as slightly shorter in height. Both consoles look pretty great vertically, and they also both come with a single USB port on the front (they both have two more USB ports on the back).

When put horizontally, the Xbox Series X is just as wide as the Xbox One X, though it’s much taller. However, the Series X is quite shorter in length, and in that position, the top fan will fire hot air on the side instead of the top. It’s clear that the vertical position is probably best for the Xbox Series X, and all marketing images actually also show the console in the vertical position. However, depending on the dimensions of your cabinet, laying the console horizontally is possible.

Compared to the Xbox Series X, the Xbox Series S looks much better in horizontal position, and it’s actually quite similar to the Xbox One S with the large fan on the right. Overall, the console is much smaller than the Xbox One X, and GameSpot also noted that both consoles have about the same height. Considering that the Series S packs the same powerful CPU as the Xbox Series X plus a GPU that will support 1440p/60FPS gaming and DirectX Ray Tracing, this compact design is pretty impressive. 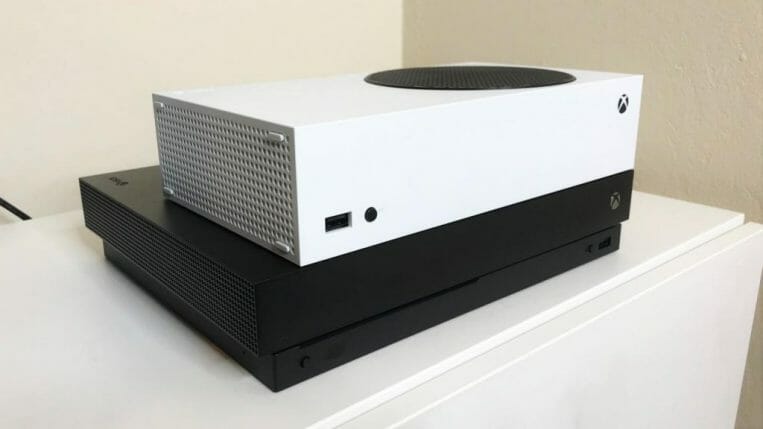 Again, you’re looking at non-functional consoles which have just been created for taking side by side pictures. Microsoft has already shown bits of gameplay footage on its next-gen consoles, though we have yet to truly see how next-gen features like DirectX Raytracing and Variable Rate Shading will make a difference on the Xbox Series X and the Xbox Series S. It will also be interesting to see how next-gen games will look on the latter, which will target 1440p at 60FPS but still be able to upscale every games to 4K.

This holiday season, Microsoft will have the most powerful next-gen console with the $499 Xbox Series X, which will target 4K at 60FPS. However, the cheaper Xbox Series S may well be more attractive for gamers on a budget or everyone else who doesn’t obsess about playing games in native 4K. The smaller form factor may also be a big selling point, and the Xbox Series S is indeed the smallest Xbox console ever created by Microsoft.