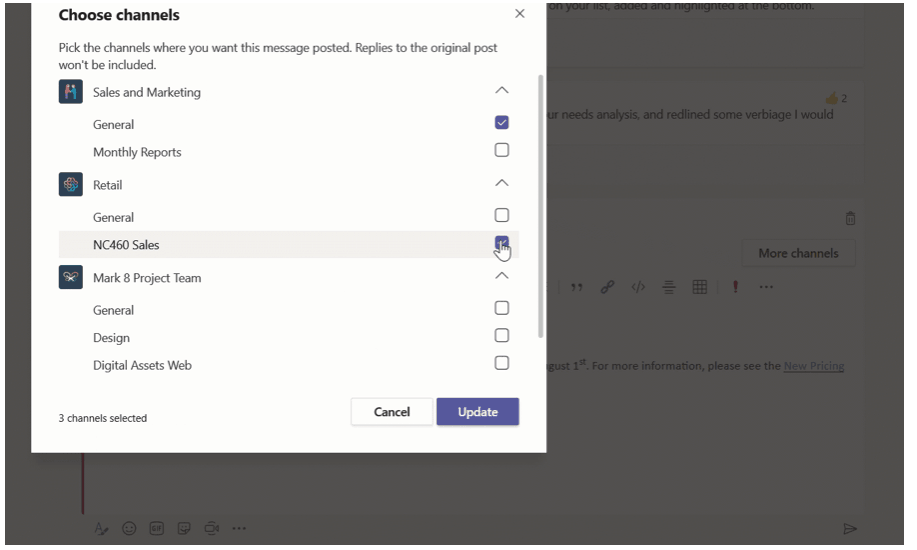 Microsoft announced earlier this month that Microsoft Teams had now reached 13 million daily active users, and on this occasion the company also introduced a couple of upcoming Teams features that may have gone under the radar. One of them is the ability to post a single message in multiple channels at the same time, and it will work with a new “Select channel” button at the top of the message box.

Coming soon to #MicrosoftTeams: Channel cross posting allows you to post a single message in multiple channels at the same time. https://t.co/rMdnLnezOl pic.twitter.com/mucNvVe5Rx

Microsoft didn’t share a precise ETA for channel cross posting, but it’s probably a feature that will require users to have some self control to avoid creating too much noise. Other incoming Teams features that Microsoft announced earlier this week include read receipts in chat, priority notifications for time-sentivie messages, and giving channel moderators some control over what gets posted in a channel.

Microsoft often says that Teams is the fastest growing apps in the Microsoft 365 galaxy, and it's certainly one that gets a lot of attention with frequent updates on both desktop and mobile. A little bit more than two years after its launch, Teams now has more daily active users than Slack, though Slack CEO Steward Butterfield doesn't seem to worry about it. There's definitely room for both, but there are many reasons why Teams can offer more value to business users, especially in companies already using Office 365.

Can Project xCloud save Microsoft's Mixer, or will it become another Windows Phone?

Play the Gears 5 Tech Test, Overwatch and more for free with Xbox Live Gold this weekend