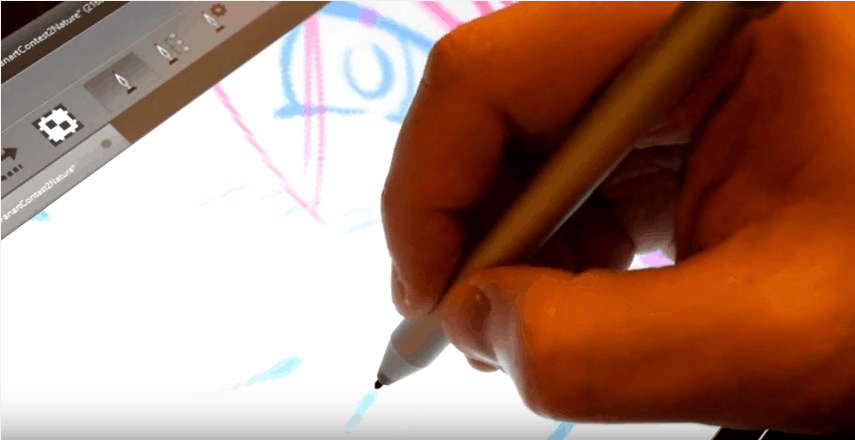 Wacom is the undisputed leader of digitizer technology bar none: For decades, Wacom pens, drawing boards and tablets has been dominating digital art and production: its electro-magnetic resonance (EMR) pen tech is still regarded as the gold standard for responsiveness and natural feeling.

Notable challengers have shown up in recent years however; biggest of which is N-Trig, with their Active Electro-Static -powered pen that brings some unique advantages over traditional EMR, including lower parallax, better edge performance, and thinner digitizer layer, leading to lower cost. The tech was so competitive, in fact, that it was adopted by Microsoft for the highly-successful third iteration of its Surface tablet line, formerly adorned with Wacom ERM solution. That lead to an acquisition, and now Microsoft devices are firmly in the N-trig camp, delivering great improvements with the current Surface generation.

It seemed as if Wacom was slow to compete and would lose its crown, until it unveiled its own AES solution. The tech immediately worked better than N-Trig's then-nascent efforts, offering 4 times the pressure sensitivity (2 times at the present), improvements on AES's inherent quirks, and a lower cost than EMR.

Initially appearing in the Toshiba Encore 2 Write, the solution has quickly been adopted by nearly all major hardware makers including Lenovo, HP, and Dell. The fragmentation was a problem, however: there was no universal stylus from Wacom for the tech, leading to each manufacturer making their own AES pen version with no cross compatibility. At CES, Wacom has finally introduced the one pen to rule all pen(abled devices), and it's called the Bamboo Smart.

Design-wise, the Bamboo Smart is suprisingly like Microsoft's N-trig-based offering, the Surface Pen, specifically the Surface Pro 3 version. The straight barrel is a smooth, matte metal, compared to the rubberized texture on Wacom's usual EMR styluses and the strange shape often found on those accompanying Wacom tablets. There is a cap - complete with a clip - to protect the nib, however, something the Surface Pen lacks, and it makes the Bamboo Smart ever more pen-like

The first signal of the Bamboo Smart's digitizing nature is the two side-buttons. Microsoft decided to move the eraser to the top of the newest Surface Pen, and Wacom seems to disagree with that decision here. The two buttons are notably programmable. The inside is the usual Wacom AES standard fare with 2048 levels of pressure sensitivity. Wacom doesn't seem to have found a way to cram tilt sensitivity into its new stylus, something Apple has accomplished with its thinner Pencil (Wacom started it with its EMR tech however).

As stated, Wacom's AES tech has been adopted by most major PC makers in selected new offerings, and the pen should work well with these machines without much hassle. The listed devices include the Dell Venue 10 5000, Dell Venue Pro 10 5000, HP Elite x2 1021, Lenovo ThinkPad P40 Yoga, and Toshiba dynaPad N72 (New). The new ThinkPad Yogas and just-announced X1 Yoga are also confirmed for Wacom AES support, and I'm quite sure the Bamboo Smart would work well with these machines as well. Interestingly, Wacom stressed that the pen would work with compatible devices "no pairing required," probably from the confusion some consumers have had with Microsoft's Surface Pen (which also doesn't require pairing to function, the Bluetooth is only for the top button to call up OneNote and Cortana).

The new Bamboo Smart will have a starting price of $39.95, much cheaper than other solutions, and will be available from February this year. We will be keeping a close eye and update you once more information comes.