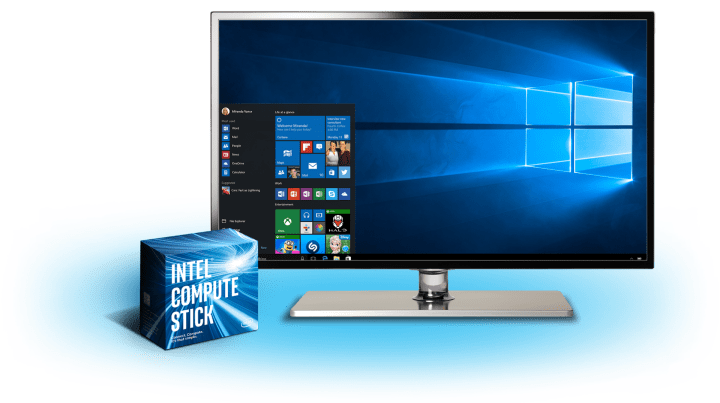 If you fell in love with a monitor unveiled at CES or just happen to have a monitor already setup, Intel has announced new Compute Sticks that can turn any monitor into a full PC. The new ones from Intel are smaller than previous models while packing new CPUs for improved performance.

There are two Intel Core M models, one runs on the Intel Core m5-6Y57 vPro for $499 and the other runs on the Intel® Core™ m3-6Y30 for $399. It’s worth mentioning that the m3 model comes with Windows 10 while the m5 version comes without an operating system. Internally these have 64GB storage and 4GB or RAM. They come with three USB ports and Dual Band Wireless AC 7265 and Bluetooth 4.1. The expected production date is February 2016.

There’s also an Intel Atom based model which is very affordable at $159. As one would expect, at less than half the cost of the Core M based compute sticks, the Atom based model has much less power. Depending on who is interested, that may not matter. It runs on an Intel® Atom™ x5-Z8300 quad-core processor, has 32GB of storage and 2GB of RAM. It only has two USB ports compared to its bigger higher end siblings and sports the slightly lower Bluetooth 4.0 and the same dual band wireless connectivity (AC 7265). The Atom based compute stick is already in production.

Compute sticks are portable, affordable, and becoming more powerful. Intel has a solid foothold in this market already and these new models appear to be welcome additions. Intel has a full webpage dedicated to these as well if you’d like to find out even more specific details.

This is the Microsoft Lumia 650