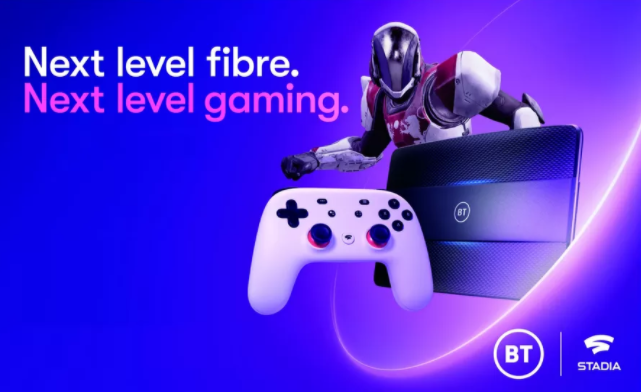 BT, the biggest mobile carrier and ISP in the UK has teamed up with Google to bundle free access to Google Stadia with some of its broadband plans (via The Verge). Consumers opting for BT’s Superfast Broadband 2, Ultrafast Fibre 100, or Ultrafast Fibre 250 services will get a free Stadia Premiere Edition ($129 value), which includes a Chromecast Ultra and Google’s Stadia controller.

Google Stadia launched to tepid reviews back in October, and this new partnership with UK’s biggest ISP was quite unexpected. This is a first of Google Stadia, and this sounds like a good way to put the cloud gaming service in more hands. BT also has a new marketing campaign in the pipeline for these new Stadia bundles in the UK, and Google certainly needs the help to increase Stadia’s brand awareness.

"Looking at our upcoming lineup, we are tracking more than 120 games coming to Stadia in 2020, and are targeting more than 10 games in the first half of this year alone that will be only available on Stadia when they launch," Google said in a note to press yesterday (via Eurogamer). "We're working with our partners to share more on those games soon,” the company added.

Three months after launch, it’s hard to know how Stadia is really performing so far, but there are already some signs showing that early adopters are slowly losing interest in the platform. According to data from Sensor Tower (via Pocket Gamer), downloads of the Google Stadia app for iOS and Android have halved since November.

Forbes’ Paul Tassi is also reporting today that the number of Destiny 2 players on Stadia has decreased to 5,500 according to tracker Charlemagne.io, which represents "less than a third of what it was near launch, and just half a percent of the game’s entire population across PC, PS4 and Xbox One." Destiny 2 was a launch title for Google Stadia, so these numbers definitely not a good look for the cloud gaming service.

Steam may be coming to Chromebooks according to new report