Most of the correspondence between the Bill and Melinda Gates Foundation and the public is done through press releases after philanthropic donations or programs have been initiated.

However, for the past ten years, Bill and Melinda have set aside a small portion of their time to directly interact with the public at large through their foundation’s annual letter which normally touts the year’s achievements. For 2018 though, Bill and Melinda decided to offer a bit of insight into their personalities and ventured to take on “10 tough questions that we get asked.”

Bill and Melinda’s new Q/A session is a bit heavier and more philosophical than other outreach endeavors we’ve seen such as Bill’s AMA’s or secret Santa interactions. As presumed, some of the questions on the list come from the Gates Foundation’s most staunch critics looking for real commentary on how and why Bill and Meldina believe they can impart their influence, financial or celebrity related, in areas, they are relatively nascent at.

Addressing the concerns of how impactful the Bill and Melinda Gates Foundation has been at tackling education, the two have opted to post a lengthy 13-page letter as well as a reference to a recent interview of the foundation’s overall optimism for the future, despite growing geological and economic turmoil.

The Gates Foundation reports spending about $4.5 billion a year, consisting of $500 million in the United States, primarily on educational programs; and $4 billion towards global health, agriculture and other efforts in developing countries. Throughout the letter, the Gateses address with some humility the evolution of their philanthropic strategies, and Melinda repeatedly raises the importance of women’s empowerment.

In terms of education, the Gates Foundation primarily targets high school-related endeavors and also supports early learning and postsecondary education. The letter recounts lessons learned and missteps and notes that newer initiatives focus on helping U.S. middle and high schools “develop and implement their own strategies for overcoming the obstacles that keep students from succeeding” (emphasis theirs) rather than delivering top-down solutions.

Bill and Melinda also clarify the position of their own wealth redistribution, when asked in a round-about way why they spend so much on philanthropy, by stating that, “If we think it’s unfair that we have so much wealth, why don’t we give it all to the government?”

“The answer is that we think there’s always going to be a unique role for foundations. They’re able to take a global view to find the greatest needs, take a long-term approach to solving problems, and manage high-risk projects that governments can’t take on and corporations won’t.

“They do feel like they’d rather give their money away than have it captured by estate taxes,” he said. “Philanthropy is a more high-leverage tool.”

While the letter attempts to address commonly asked criticism of the foundation, Bill and Melinda also put together a more lighthearted video that attempts to further humanize the ultra-wealthy pair. In a minute and half long YouTube video, we see the second set of more enduring questions being asked that include what Melinda actually looks like and if Bill Gates is even alive anymore. 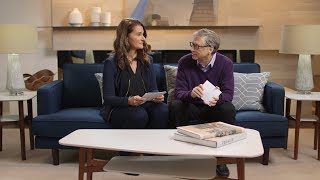 Most of the correspondence between the Bill and Melinda Gates Foundation and the public is done through press releases after philanthropic donations or programs have been initiated. However, for the past ten years, Bill and Melinda have set aside a small portion of their time to directly interact wi

The exchange is fun and lighthearted and should be watched by fans of the Bill or Melinda, education or philanthropic endeavors.