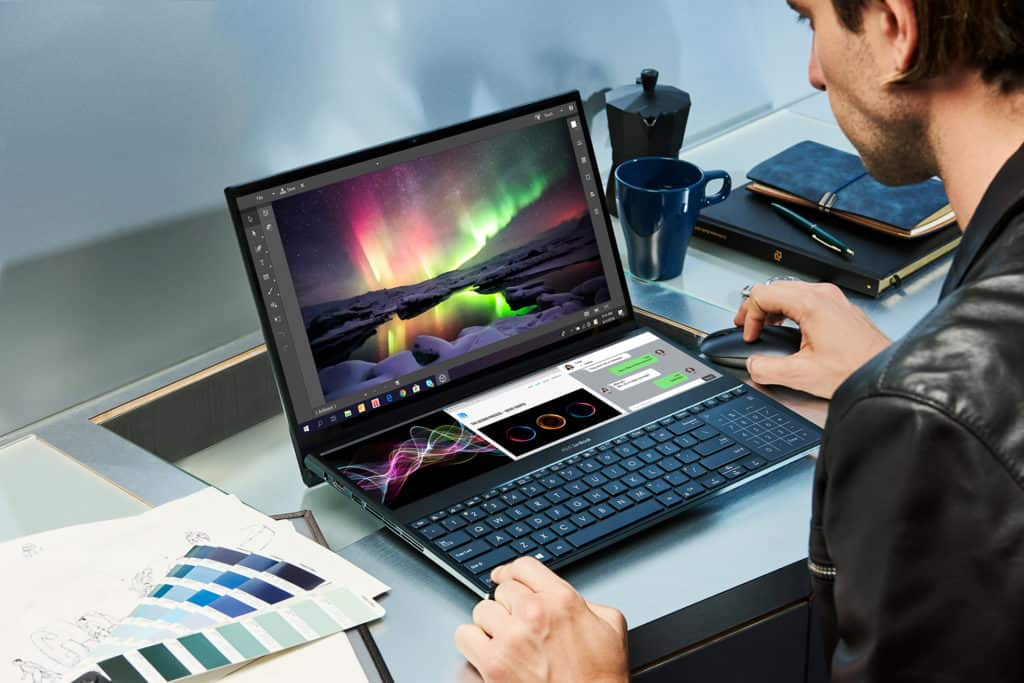 Asus announced today a series of interesting new laptops at Computex in Taipei today. Along with other PC manufacturers including HP, Asus is trying to make dual-screen laptops the next big thing, and the new ZenBook 13, 14 and 15 models now include the the company’s ScreenPad 2.0 which replaces the traditional trackpad.

Asus’ new ScreenPad works like an interactive secondary touchscreen, which can be used as an app launcher, handwriting tool, Task Viewer, video viewer, and much more. The new Zenbooks also feature up to 8th Generation Intel Core i7 quad-core CPUs, up to NVIDIA GeForce GTX 1650 Max-Q graphics, 16GB RAM, and a new NanoEdge display with up to a 95% screen-to-body ratio.

Asus is also bringing its ScreenPad technology to the new 15” ZenBook Pro Duo, which comes with a full-width “Screenpad Plus” secondary touchscreen that can do even more than the Screenpad 2.0 found on the new ZenBook laptops. Asus is highlighting several multitasking use cases with the ability to use the ScreenPad as an extended screen, but the built-in app launcher will also allow users to open multiple apps side by side and swapping them on the main display. In addition to the 14" ScreenPad, the ZenBook Pro Duo also comes with a touch-enabled NumberPad that is integrated into the touchpad.

As for hardware specs, Asus is offering up to 9th Generation Intel Core processors, up to 32GB RAM, as well as top-of-the-line NVIDIA GPUs with the GeForce RTX 2060 on the 15-ZenBook Pro Duo, or a GeForce MX250 on its smaller sibling, the 14” ZenBook Duo.

Asus has yet to announce pricing and availability details for its 15” ZenBook Pro Duo and 14” ZenBook Duo, but it’s interesting to see how the company managed to create a much bigger and more versatile version of the Apple Touch Bar found on recent MacBook Pros. It’s still hard to know if dual-screen laptop will resonate with consumers, but Asus deserves credit for pushing boundaries and trying to replace our good old trackpads.

Save up to $400 off select Surface Laptop 2, Surface Book 2 and Surface Pro 6 models