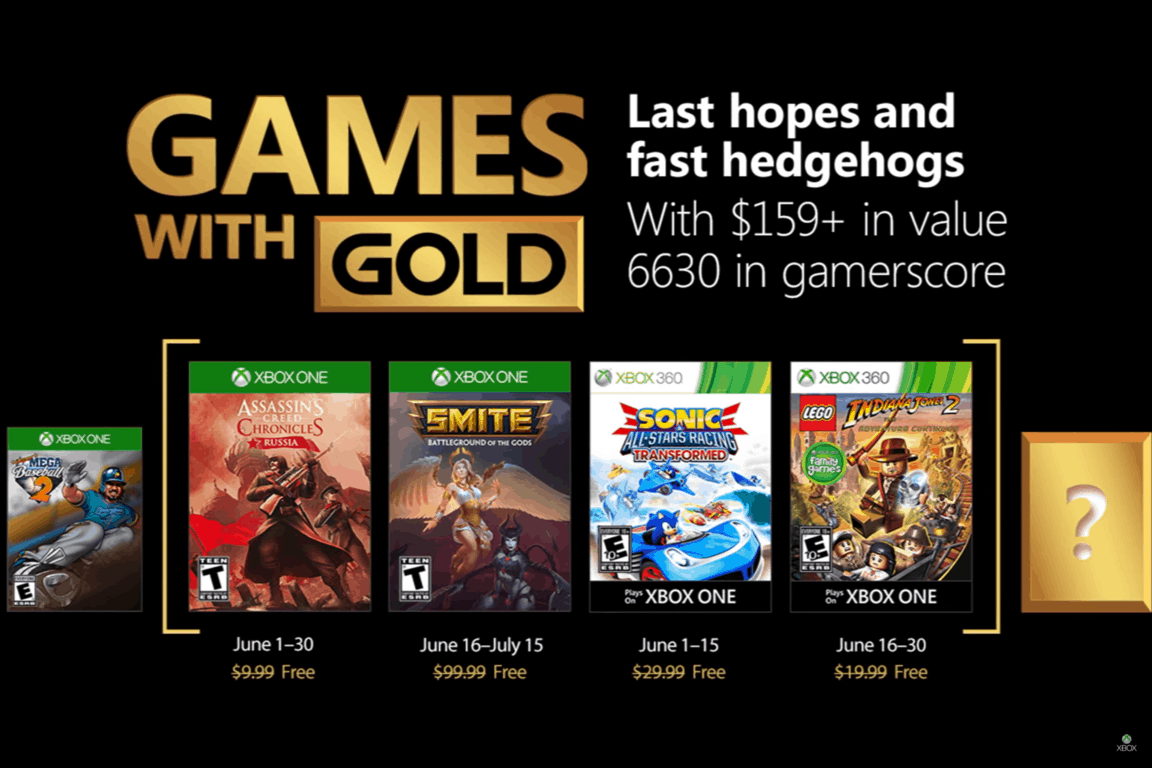 Microsoft today took the wraps off June's Game With Gold. Free for Xbox Live Gold members in June are Assassin’s Creed Chronicles: Russia, SMITE: Gold Bundle, Sonic & All-Stars Racing Transformed, and LEGO Indiana Jones 2. The games pack $159+ in value and 6630 in gamerscore, so here's more on what you can expect.

Experience the thrill of being a master Assassin in 2.5D. Sneak and hide to avoid detection and fool enemies using whistles and disguises.

SMITE is the online battleground of the gods. Players choose from a diverse cast of deities and use their unique powers to triumph over the opposition in 5v5 team matches. SMITE is a new take on the MOBA genre; rather than observing from above the action, the game’s third person perspective puts players into the thick of combat.

Sonic and the All-Stars cast line up on the starting grid once again to battle for supremacy in the ultimate race. It’s not just racing, it’s racing transformed! Fully Transformable vehicles which change from car to plane to boat mid race, each with their own unique gameplay. Over 20 legendary All-Stars each with their own transformable vehicle. A multitude of modes including Grand Prix, Battle Arenas and the incredible World Tour. Unleash ingenious weaponry and your character’s All-Star move to beat the opposition. Race up to ten players online, or challenge your friends in four player split screen. 16 dynamic tracks which challenge you on land, water and air.

In LEGO Indiana Jones 2: The Adventure Continues, play ALL-NEW levels from The Original Adventures and your favorite new moments from The Kingdom of the Crystal Skull... Or for the first time, create your own levels, for a true one-of-a-kind experience! New levels, vehicles and modes like 2-player split-screen, will let you build and battle your way out of trouble like never before!

As usual, Xbox One owners can enjoy all these titles on their consoles for free as part of the Xbox One Backward Compatibility program. There's still some time left to enjoy May's Games with Gold titles, so be sure to check it out before the month ends in two days. Which of these games are you looking forward to playing? Let us know in the comments below

Microsoft's brand value jumps 21% over last year, now worth $105B according to Forbes