April Games with Gold lineup to include Sunset Overdrive for free - OnMSFT.com Skip to content
We're hedging our bets! You can now follow OnMSFT.com on Mastadon or Tumblr! 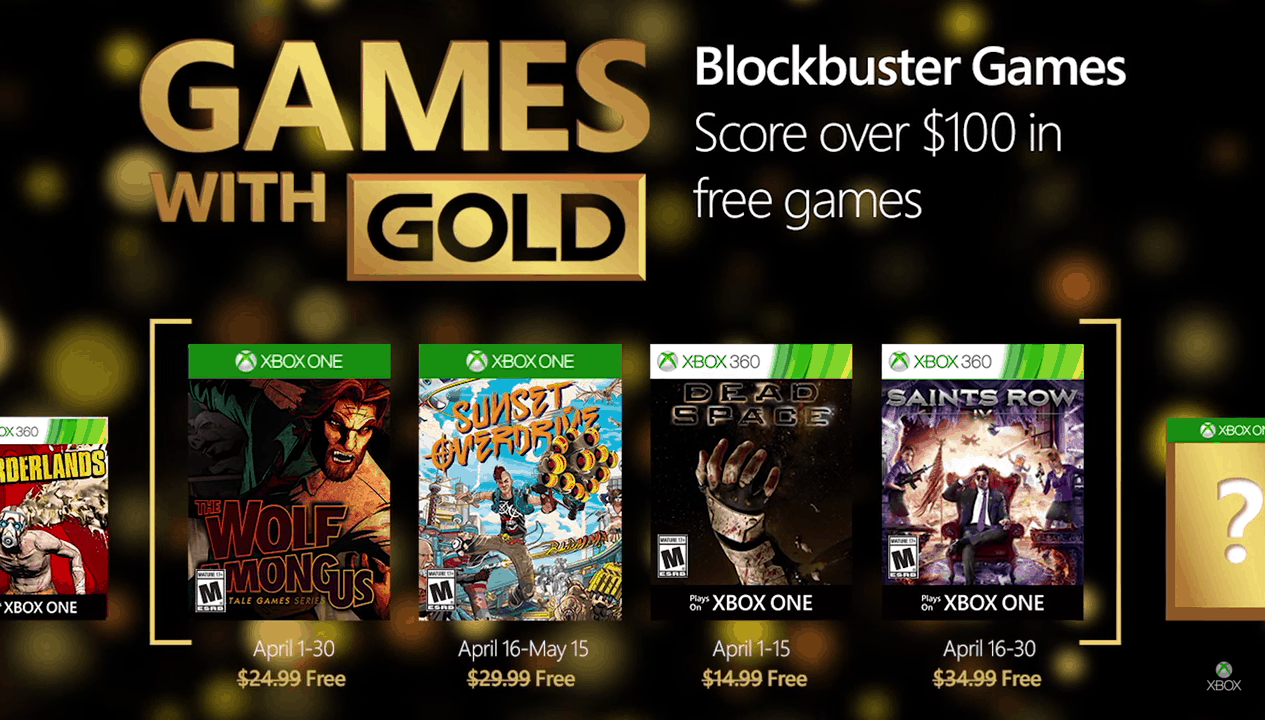 While the Xbox Store Spring Sale currently offers massive discounts on Battlefield 4, Call of Duty 4, Grand Theft Auto V and many more games, we just learned today which quality titles will be available for free to Xbox Live Gold customers next month. As with last month, Xbox One owners will get two dedicated titles as well as two Xbox 360 titles through Xbox One Backward Compatibility.

The April titles include The Wolf Among Us and Sunset Overdrive on the Xbox One plus the Dead Space and Saints Row IV Xbox 360 games. Let's go into more details below:

Based on the enormously popular series from DC Comics’ Vertigo label, the game follows Bigby Wolf (that is, “Big Bad Wolf”) who stalks 1980s Manhattan as he tries to solve a series of bizarre murders that appear to be taking out his fellow fairy tale characters… all of whom are (like Bigby) in disguise among the regular human population. You’ll recognize famous faces like Snow White, of course, but you’ll be floored by the many twists and turns that the story takes.

The world’s gone mad in Sunset Overdrive, thanks to a very bogus energy drink, and it’s up to you to set things right – or, at least, look really cool trying. A combination of grinding rails a laTony Hawk’s Pro Skater, with third-person shooter action and plenty of parkour/climbing/bouncing make up the core of Sunset Overdrive’s zany gameplay. Featuring a colorful, humorous aesthetic and a cast of memorable characters, this is one you absolutely can’t miss.

You take on the role of Isaac Clarke, space engineer – who finds himself marooned on a space station where something has gone horribly wrong. This game’s amazing, horrific visuals hold up today. With a story so creepy and so genuine, you might have to play this one in the daylight.

Saints Row IV puts you in the shoes of the Boss, the unnamed leader of the titular Saints, as they fend off an alien invasion of Earth using their skills learned as members of the world’s most badass street gang/corporate pitchmen. Saints Row IV combines elements of role-playing, action, comedy, adventure, martial arts, and just plain crazy, in ways that no other series has.

Last, we remind you that you Xbox One owners can now get their Games with Gold for Xbox 360 directly on their console: just go to the Gold slot on your Xbox One and redeem your titles from the Gold Members Area. Please tell us in the comments what do you think of the upcoming Games with Gold titles.

Microsoft releases statement on Tay.AI bot, the victim of a "coordinated effort"