Another Microsoft patent points to a dual-screen “Surface Phone,” this one deals with haptics

In what is usually a quiet time of the year for tech news, a new Microsoft patent related to the company’s work on dual-display devices has been published this week (via MSPoweruser). This new document titled “Haptic arrangement of a multiple part electronic device” describes how a haptic element integrated into the connecting part of a foldable mobile device could transmit the haptic effect between the two portions of the device.

As the company explained, the increasingly thinner devices we see in the market these days make less and less space for haptic elements, which can weaken their haptic performance. In the case of foldable mobile devices, Microsoft says that haptic engines should ideally be located near the hinge so that the haptic feedback can be felt on both sides of the device. The patent description explains:

While this new patent says that this solution could be implemented in various types of computing devices including “mobile telephones, smartphones, laptop computers, handheld game consoles, music players, media players etc,” the different drawings show a dual-screen device with a touch keyboard and trackpad on one side. This design is something that we already saw in a previous patent earlier this month. 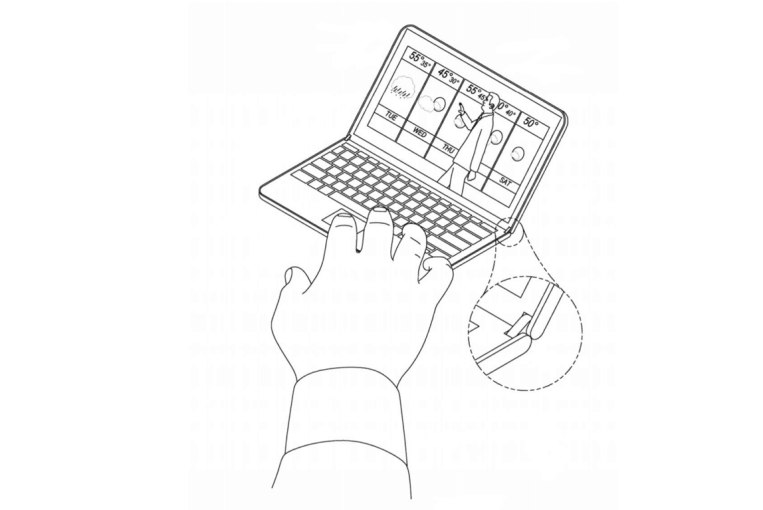 In recent years, Apple made headlines for removing the headphone jack in the iPhone 7 and its successors to make room for a bigger haptic engine. On recent iPhones, haptic feedback can be felt when pressing the home button (which is no longer mechanical) or when using “3D Touch,” which brings up quick actions when pressing firmly on an app icon. This new Microsoft patent only says that the haptic effect induced by the haptic element may be “a flickering movement or a vibration which can be sensed by the user,” and it’s not clear if Microsoft is working on specific scenarios when interacting with a dual-screen device.

As this is just a patent, it remains to be seen if this technology will eventually make its way to a new Microsoft product. Anyway, we’re looking forward to see if the continuous flow of interesting patents will continue in 2018.