Microsoft’s rumored “Surface Phone” recently came back to the spotlight after Surface inventor Panos Panay described it as "his baby.” The stream of Surface Phone-related patents also started to flow again this month: a new patent previously suggested that the foldable device could let users ink on its exterior cover, and today another patent reveals Microsoft’s continued interest in dual-screen devices (via Windows Central).

Contrary to previous “Surface Phone” patents, this one has a single inventor and no title, but it describes a foldable device in pretty great detail. Interestingly, the different drawings show a device with slightly larger screens compared to what we’ve seen in previous patents. Obviously, these are just drawings and not necessarily an exact representation of existing prototypes, but the overall form factor looks a bit more like a foldable tablet than something you could fit in your pocket. 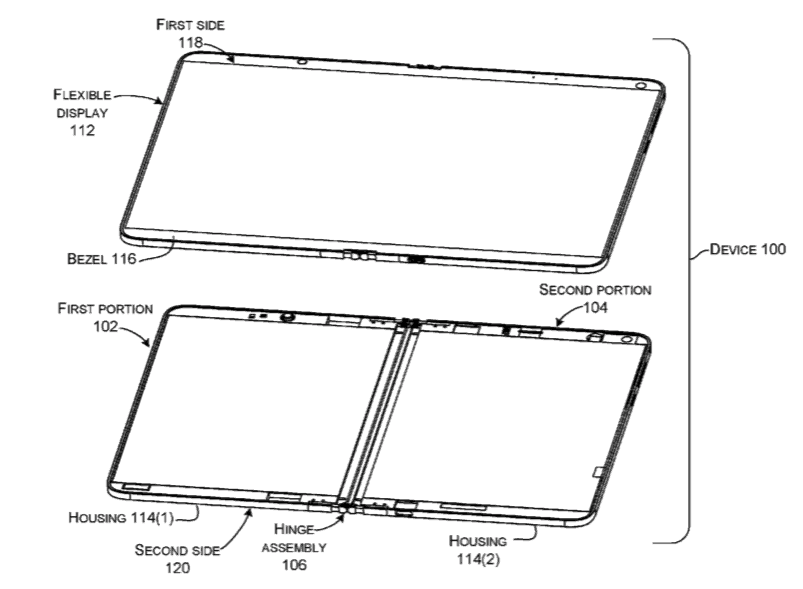 The patent also describes a hinge that can let the first and second portions of the device rotate to a 180° “flat” orientation, but a full 360° rotation like on Lenovo Yoga laptops is apparently not possible. Previous patents showed a hinge that can fully rotate 360°, a detachable hinge with a locking mechanism, as well as a Surface Book-like multi-pivot armadillo hinge. Microsoft has obviously been experimenting with different hinge systems, which is something completely normal during a product's developement cycle. As you may remember, a previous patent also described different hinge gestures to launch apps and more.

It's clear that Microsoft has many interesting ideas about foldable mobile devices, but it's still not clear if a dual-screen device is something that could appeal to many, especially if it lacks quality apps. Back in July, previous reports suggested that Microsoft was taking some time to rethink the whole project, and it may not see the light of day if Microsoft concludes that there's no market for it. And considering that Android is now Redmond's favorite mobile platform, maybe a new mobile form-factor powered by Windows is no longer the alpha and omega of Microsoft's mobile strategy.

NASA screengrab: Is this the new HoloLens? (Update: it's an early v1)